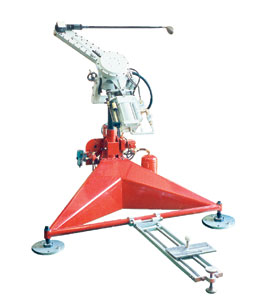 Want a 300-yard drive? No problem for Iron Byron. It can hit it right down the middle all day long. How about a 60-yard wedge shot? Just set it up to the ball, and that’s exactly what you’ll get, time after time. It has the only __perfect swing on the planet. That’s why almost every major golf equipment manufacturer has used it to test the performance of their __products and why everyone should be learning how to copy this machine.

It all began way back in 1963. A man named Gurdon Leslie, who was a Vice President of True Temper at the time, thought that having some kind of mechanical golfer to hit balls would be a good way to test the new shafts they were developing. Other golf ball-hitting machines had been developed in the past, but none of these had ever replicated a human swing or used an actual club. So, he asked the folks at the Battelle Memorial Institute, a research and development facility in Ohio, to build him the perfect swing machine.

Heading up the project was a 28-year-old mechanical engineer named George Manning. I’ve actually had the privilege of speaking with George, and the story he tells of how Iron Byron was born is fascinating. His first step was to figure out what exactly was the perfect swing. To do this, he and his team captured the swings of many top pros on film using high-speed cameras. They also measured the various stresses that each pro put on their shafts in order to determine who was making the most efficient use of their swing energy. After months of analysis, it became clear that the machine should be designed to copy the swing of golfing legend Byron Nelson–hence the name Iron Byron. Even though Byron was in his 50s by this time and had been retired from competition since 1947, he still hit shots with machine-like consistency. George could stand in the middle of the test range, 220 yards from the tee, while Byron hit his 2-iron, and catch every single ball on the first bounce. That’s what I call machine-like consistency!

After two years of hard work, and at a cost of $250,000 (a lot of money in those days), the first mechanical golfer was ready for action. True Temper actually called it their Golf Club Testing Device. In 1966, George moved to True Temper and teamed up with Bob Bush, another young engineer, to fine-tune and market the machine. In the years that followed, Bush continued to evolve the design, but the hitting mechanism remained surprisingly __similar to the first prototype. The picture above is a more recent version, with a sturdier base and improved pneumatics. True Temper’s vision of using this machine to improve golf equipment design and performance has become a reality with the installation of almost 40 Iron Byron worldwide. Though its primary purpose is to test golf equipment, I’ll explain how the machine can also be used to give you the perfect swing–a combination of consistency, accuracy, power and control.

Three Key Elements to A Perfect Swing
You’d think that designing a machine to replicate the swing of a human would turn out to be a pretty complex thing, but Manning and his team were able to build something conceptually quite simple. It has three key elements:

1. Circular Body Rotation
The source of power is a drive cylinder that rotates in a __circular motion to mimic the coiling and uncoiling of the human torso.

2. Unrestricted Hinge
It has a hinge at the end of a rigid arm that moves freely to mimic the cocking and uncocking of the human wrists.

3. Constant Forward Tilt
The drive cylinder remains at a fixed angle to the ground to mimic the spine angle that should be maintained by golfers throughout the swing.

Circular Body Rotation
The Iron Byron has a drive cylinder that rotates to the right in order to get the club to the top of the backswing and rotates to the left during the downswing. Your torso is the human equivalent of this drive cylinder. You rotate your shoulders to the right in order to start your torso coiling into the backswing, and you rotate your hips to the left to uncoil your torso during the downswing.

The drive cylinder of the machine is powered by a pneumatic motor. Attached to this drive cylinder is a rigid metal arm. It has no power of its own; it can’t move unless the drive __cylinder is moved by the pneumatic motor. What’s the implication for your swing? Your arms must also remain powerless during the swing; they shouldn’t move unless you start to coil or uncoil your torso.

Your torso is motorized by your legs and hips. As you coil back, your weight loads into your right leg and instep, which builds incredible torque to power the uncoiling. If you coil properly, your arms will automatically move to the top of the backswing; you won’t need to help them along by using your arm muscles. When you release the torque by starting to uncoil, your weight will naturally begin to shift to your left leg and foot. This will cause your arms to move automatically on the downswing and follow-through without any help from your arm muscles.

If you wanted Iron Byron to hit the ball a __little farther, you’d simply increase the air pressure in its pneumatic motor to make the drive cylinder rotate faster. Similarly, if you wanted to hit the ball farther yourself, you’d use your motor–your legs and hips–to make your torso uncoil faster during the downswing. It’s a simple matter of cause and effect. The faster you uncoil your torso–by either straightening your left leg, or springing off your right instep, or turning your hips to the left–the faster your powerless arms will swing, so the farther the ball will go after it’s hit.

Remember, your arms must remain powerless during the swing. They should only move in response to the coiling and uncoiling of your torso. Don’t worry, I’ll explain how to create proper body rotation in great detail as we move through the book. And, I’m going to break it down so you’ll find it easy to learn.

An Unrestricted Hinge
You’ll notice that at the end of Iron Byron’s fixed metal arm there is a sleeve into which the club’s grip is inserted. This sleeve is attached to the arm by an unrestricted hinge. Consequently, the club can hinge fully at the top of the backswing, unhinge fully at impact and re-hinge fully at the end of the __follow-through. Imagine if this hinge were rusty; its movement would become restricted, so the clubface would not be able to return squarely to the ball in time for impact. It would also slow down the incredible whipping action through the hitting zone that generates most of the power in the golf swing. As a result, the ball wouldn’t go as far.

Tension has the same effect on your wrists as rust does on the Iron Byron’s hinge. The harder you try to hit the ball with your arms, the more tension you create in your wrists, which slows down the unhinging process. This makes the clubhead swing slower and keeps the clubface open at impact. Now you know why most of your shots end up short and to the right whenever you try to hit the ball as hard as you possibly can!

You have to keep all the tension out of your arms and wrists in order to generate maximum clubhead speed and to keep the clubface square through impact. To do that, you have to keep your arms powerless, and you have to have the proper grip. These are important fundamentals, and are key to producing consistent and acceptable golf shots._Ê

Constant Forward Tilt
The third and final element to the perfect golf swing is keeping the forward tilt of your spine at a constant angle. As you can see in the illustration, Iron Byron’s drive cylinder is mounted on an angle that allows the club to reach the ball. Once the machine is set on this angle, it never raises its drive cylinder up or down_Ê during the swing. This is why it hits the ball in the same spot on the clubface (the sweet spot) shot after shot.

Remember, your torso is equivalent to the drive cylinder of the machine. When you bend from the waist to assume the setup position, you set your drive cylinder on an angle. Just like the machine, you have to maintain this angle throughout your backswing, downswing and followthrough. This will maximize your chances of being able to hit the ball on the sweet spot at impact. During the backswing, you must avoid standing taller. During the downswing, you must avoid bending forward. And, on the followthrough, you must resist the temptation to look up early to see where the ball is going before you’ve even hit it. Changing your spine angle in any of these ways can cause a myriad of bad shots, like heeling, toeing, topping and hitting thin. Within the book, I’ve devoted an entire chapter to self-diagnosing these flaws.

Everyone Should Learn To Copy This Machine
To prove it really is possible to copy the machine, let’s take a look at my swing versus that of Iron Byron. George Manning didn’t try to replicate the backswing of a human when he built the machine. There really wasn’t much point, since nobody hits the ball on the way back. So, for this comparison, we only have to concern ourselves with what happens from the top of the backswing to the end of the __followthrough.

To start the downswing, Iron Byron rotates its drive cylinder to the left. This makes the metal arm that’s attached to it swing down toward the ball. Remember, the metal arm can’t move unless the drive cylinder moves. That means I can’t start the downswing with my arms. Instead, I must uncoil my torso by turning my hips to the left. In the photograph of me starting down, notice how far my belt buckle has already turned versus where it was at the top of the backswing. This rapid_Ê uncoiling of my torso pulls my arms down automatically. I don’t try to muscle the ball with my arms. Instead they remain absolutely powerless. This allows my wrists to be as free-moving as the hinge on Iron Byron, which maximizes clubhead speed and allows the clubface to square at impact.

Just like the machine, my wrists begin to hinge again past impact and continue to do so throughout the followthrough. Because I have to turn my upper body 90 degrees to the target line in order to watch the ballflight, it looks like I __finish in a different position. But, if you turn the camera so that it’s facing me again, you’ll notice that my club has fully re-hinged to 90 degrees, just like Iron Byron’s. So you see, it really is possible to copy the machine.

In his new book, Swing Machine Golf–The Fastest Way to A Consistent Swing, veteran teaching professional Paul Wilson (with writer and publisher Ken Steven) breaks down every aspect of the swing, and shows the reader how he or she can learn to become a human swing machine. The hardcover edition includes more than 400 color photographs and comes with free online instruction and tips. For more information or to purchase the book, visit www.swingmachinegolf.com. Photos by Liam Sharp.