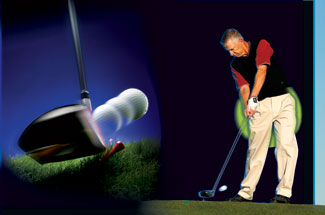 If there’s an absolute truth in golf, it’s that the faster you can move the clubhead, the greater the potential for extra distance. Granted, you still need to make solid contact in the center of the face and with the club moving on the proper plane, but all other things being equal, more speed definitely means more yards. The big question is: Where does speed come from? Your hands can move fairly quickly, and there’s no faster part of your body than your fingers. But where the golf swing is concerned, a fast clubhead almost always results from fast hips moving correctly and in the proper direction.

When you establish proper powerful hip movement, the golf club becomes a slingshot—an unimpeded delivery of centrifugal force. With correct hip movement, you need to do very little with your arms and hands since they’ll own the space in which to gather speed and create tons of unforced—“soft,” as I call it—clubhead speed.

Setup
The golf swing truly is a series of chain reactions, so let me start by explaining correct hip posture at address. I assume most of you know all that goes into creating a decent posture in your setup. But what you may not be aware of is how firmly the hips must be set in at address, the golfer must strive to produce a sound hip flex/sit, correct spine bend and a light athletic knee bend. This type of stance promotes a sense of strength that will permeate the swing. Watch a linebacker take his stance behind the defensive line. He’s balanced yet able to pounce in every direction at a moment’s notice. That’s the feeling you need to create.

Unfortunately, many golfers who can establish this strong hip/sit foundation simply don’t possess the flexibility to move that foundation efficiently, causing many needed compensations to make decent contact.

You can alleviate this problem by avoiding one of the greatest faults in the history of the game: bending from the waist, not the hips. Golfers who bend (slouch, really) from the waist have almost zero chance of developing a successful long game. But if you bend from the hips, you’ll discover a new, natural freedom in your rotation that can achieve near-perfect levels with consistent stretching.

Takeaway
At the setup, the hips sit a prescribed distance from the ball (which, of course, depends on your stature). This distance needs to be maintained in order for your legs, thighs and hip flexors to move the club with maximum speed.

As you initiate the backswing, the right hip should willfully accept the early transfer of weight. The important aspects here are that the right knee maintains its bend and that the right hip moves back just a little yet maintains its original flex. The left leg also plays a huge role in this section of the swing. The left thigh must stay “inside.”Most golfers tend to allow their left leg/hip to move in toward the golf ball, which pulls the right hip out of position, thereby destroying the entire setup.

Remember: The right and left hip flex is never lost, despite the presence of hip rotation. The key is to shift and turn without ever bending forward. The left thigh and foot stay inside and flex slightly toward the right knee.

Top
At the end of the backswing, you’ll know you’ve properly maintained your hip flex in a solid position if your lower body center (aka your tailbone) still holds the position it established at address (save for a slight move to the right, for a right-handed golfer). Holding the lower body center in place creates tons of leverage because doing so requires turning the upper body against a stable lower body. I’m sure you’ve heard the terms “coil” and “X factor” before. Well, there it is—a powerful separation between the shoulders and the hips. It’s interesting how in a proper backswing, the hips and glutes move to the right without the right thigh and calf ever changing their position. This is due to the correct hip sit, both established at address and held during the backswing. It’s very powerful stuff. 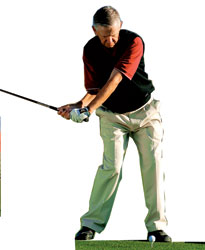 Downswing
Delivering the clubhead is simply a matter of reversing the movements of the backswing. The mistake most golfers commit here is moving the right hip toward the ball, a move that destroys the original hip flex (I told you that was important!).

In a powerful downswing, weight shifts to the left, with the right hip holding its original address flex. The right thigh and knee remain “inside,” yet move smoothly toward the left. This combination is what allows the arms and hands to deliver the clubhead on the desired inside path.

As the clubhead nears impact, the left hip and leg move left and “grow tall” (rise slightly), which creates room for the arms and hands to power the club through the hitting zone. Although the left hip rises and clears, it maintains its flex. This dynamic hold plays a huge role in power and path delivery. Without it, your swing will suffer.

Impact
At the point of contact, the hips dramatically shift toward the target so, basically, they get out of the way. Again, the hips clear without losing their original flex and, more importantly, without flexing toward the golf ball (reverse flex). The loss of hip flex through the hitting zone is a monster power leak.

In fact, it’s near impossible to retrace the backswing path on the forwardswing if the hips reverse flex and block the arms from moving on the correct return path.

The next time you see a Tour player swing, watch his or her hips, thighs and legs. They stay very much close to the position they hold at address. The hold of the hips, legs and thighs is absolutely paramount to establishing your power delivery system. In the photo above, notice how only a small amount of daylight exists between my hips and legs, yet my target-side hip and leg have moved strongly toward the target. This is the element of hip hold you’re after, and once you attain it, watch the yards pile up.