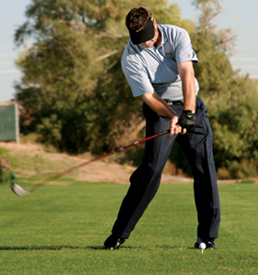 Recreational golfers, top amateurs and pros have at least one thing in common–they all want to drive it long. It's a desire all golfers have, which is why driving ranges are full of people swinging out of their shoes in the attempt to hit it higher, longer and farther. The guys who compete on the LDA (Long Drivers of America) Tour also want to hit it long, which, to them, is anything over 350 yards. Granted, most of the LDA competitors are significantly bigger and stronger than the average golfer, and can produce high swing speeds through the use of brute force. However, long drivers can't make it through the many tiers of competition on strength alone. To hit it as far as they do, they need to employ solid, power-producing techniques. These moves are proven to work, and can be used by PGA Tour players and weekend duffers alike. And while the majority of LDA competitors have never played in a Tour event, or even tried to get through Q-School, they're experts at producing distance. Take a close look at the positions of power they employ, and you, too, might learn to go deep.

Deep into the downswing, David Mobley retains a large amount of the angle formed between his left arm and the shaft. This allows the clubhead to accelerate all the way through the golf ball, maximizing clubhead speed. He does this by maintaining the bend in his right wrist as long as possible, which keeps his hands leading the clubhead throughout his swing. Also notice that the left leg is straightening during impact, a move that helps create the greatest distance possible between the left shoulder and the clubhead. This is a huge source of power!

1. The significant shaft bend results from the clubhead resisting the change of direction from backswing to downswing.

2. Mobley doesn't allow any power to escape from his swing. All levers are still intact without a hint of club throwaway.

3. This is deep! His left hand is over the ball, yet the 90_¡ angle between the shaft and his left arm remains.

Power Tools
Considering the growth in driver head size, and a corresponding rise in face height and sweet spot location, you need a longer tee. Check out Pride's collection of 2 3__ã4- and 3 1__ã4-inch pegs ($2.99/50).

2. Pavlet is displaying a classic, power lifter's squat position as he starts the downswing, which helps him create enormous power. It appears he's having a tug-of-war–which he is clearly winning–with the weight of the clubhead. This is very similar to pictures of the legendary Sam Snead at the same point in the swing. It's important to note that Pavlet's body is dropping slightly due to the increase in knee flex as he yanks on the handle of the club with his legs, stomach and trunk, not his hands. By primarily using his body, Pavlet can explode into the golf ball with everything he's got.

4. His left leg is locked and his left arm is fully extended in a classic power position.

Power Tools
The Cobra SZ Series is a top choice for pro long drivers like Pavlet who need accurate distance.

1. Ciurlini's setup is reminiscent of a lumberjack ready to chop down a tree. Notice how far his head is_Ê behind the ball–this is something all power hitters do to create leverage. However, Ciurlini takes it to the extreme, positioning his entire body behind the ball. He also has all the other classic elements of a power hitter's stance, including flexed knees, feet that are wide apart, a strong grip with the entire back of the left hand visible, shoulders tilted down to the right and a head position that's tilted away from the golf ball. With this type of setup, Ciurlini is creating a solid platform from which he can generate a huge turn and the means to move back to the ball at impact. While this technique may not produce perfect consistency, it does output a lot of raw power. If he fails to get back to the ball, Fore left! But when he does, Tim-berrr!

2. Although he's already set up behind the ball, Ciurlini moves even farther away from it in the takeaway.

3. The lateral movement of his body keeps the clubhead low to the ground. This also increases the size of his swing arc for more power.

4. You can't get farther behind it than this. Although he executes a huge turn, he keeps his right knee flexed.

5. His turn is so big, he can barely see the ball. He'll need a taxi to get back. He usually does, thanks to good timing and lots of practice.

Big hitters need shafts that can handle a powerful swing. One of the best is the Harrison Pro 2.5 Titanium. Low torque, satellite-grade graphite and a special titanium-reinforced tip section pay dividends for Ciurlini.

1. At this point in the swing, an extension of Fister's club points at the target line, a key for accuracy.

2. The clubhead is slightly inside the optimum line, but that's normal for an extreme power hitter.

3. Although hitting the ball as far as possible is the ultimate goal for long drivers, accuracy is still a concern, and delivering the club on the proper path and plane is the key to Fister's consistency. There are power benefits to swinging on plane as well. A club attacking on plane has a much better chance of striking the ball in the sweet spot, which not only takes advantage of the COR benefits of modern drivers, but also creates the least amount of sidespin. Driving the club down the plane also produces a predictable, power-rich force through impact that an off-plane delivery cannot.

4. Through impact, the clubhead again points at the target line. Solid.

1. The combination of a strong grip and flat left wrist close the clubface at the top.

2. Wolter's hips move quite a bit on the downswing, yet they remain level.

3. Wolter's hips have completely rotated open, allowing his arms to fully extend through the hitting area. Not only have the hips cleared, but they have remained level, which is key. By rotating through on a level plane, his right shoulder, arm and hip are able to continue adding power through impact. This prevents his body from getting stuck, which would limit the potential for clubhead speed by forcing him to hit only with his hands.

5. His right side is completely through the shot, a move that most golfers would do well to emulate.

Power Tools
One of the most used driver heads at all long drive events is the 100% forged titanium Alpha Reaction C830.2.

1. The clubhead is approaching the ball from the inside, a must for power hitting.

2. His arms, hands and club are moving away from his body at impact.

3. His right hand and arm are beginning to get on top during the release, which creates clubhead rotation.

4. Wellong's arms and club are clearly traveling away from his body after impact. Like a power hitter in baseball, extending the arms through the hitting area creates tremendous power. It's also evident that the clubface is rolling closed due to a dominant right hand, which is very similar to what a top-handed baseball slugger does. The combination of hitting from the inside out and rotating the clubface creates a lot of power as well as a right-to-left shot shape. There's no chicken wing here, which is the ultimate power killer._Ê

5. The clubhead is still visible to the right of his body. There's no way to slice from this position.

If you want to compete with the big boys, consider the Accuflex Assassin II, a 98-gram, 57-inch shaft with a paltry 2.25 degrees of torque. Thankfully, Accuflex offers a shorter, lighter version in less extreme flexes.

1. Simmons moves the club with his body, not his hands–a great technique._Ê

2. Notice how Simmons' left arm is parallel to the ground while the shaft is perpendicular to it. This position indicates a massive coil away from the ball, and you can see his entire body stretching and straining to get turned. His arms have done a fine job of remaining passive while keeping the club away from his body, which is critical for creating speed. The coil is further enhanced by his left foot position, which is firmly on the ground. This limits his hip turn and shortens his backswing.

3. The legs are playing a supporting role, solidly placed under his upper body.

4. A huge turn of the body and short swing of the arms is ideal.

5. A great combo: wide on the back, narrow on the way down.

Power Tools
All you need to know about the forged SMT 455 Deep Bore is that it's the winningest clubhead in long driving history.

One thought on “Positions Of Power”