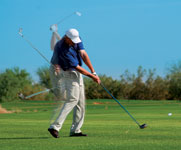 There’s at least one basic certainty in golf and that is that good, solid contact produces quality shots. Every player, even those who compete on the PGA Tour, knows this and strives to perfect the moment of impact. Unfortunately, many recreational golfers don’t make high-quality contact as often as they should, in part because they simply don’t know the key elements necessary to do so. Knowing and practicing the key elements of impact is critical to producing consistently well-struck shots, so you must be aware of the basics, as well as the fact that there are significant differences between properly striking a ball with an iron and doing so with a driver off a tee. Study the keys that I provide and practice them, and I guarantee your ballstriking will improve in no time.

All good players are good ballstrikers. That’s the basic secret to producing shots that have a solid sound and feel and travel a long way. To strike the ball properly, you must learn the key differences between iron and driver impact.

Setup
For an iron, position the ball about two inches inside your left heel and assume a neutral spine tilt (your right shoulder should be only slightly lower than your left). Your feet should be just inside shoulder width, and your arms should hang freely with your hands over the front portion of the golf ball. To adjust for a driver, maintain the same ball position relative to your left heel, but move your right foot back so your feet are just outside your shoulders. Tilt your spine farther away from the target (the right shoulder should be significantly lower than the left) and place your hands over the back of the ball.

Impact Differences
A proper setup position with an iron features a relatively neutral spine angle, allowing for a more downward strike, which is critical to solid iron impact. The hands should lead the handle of the club into the ball, creating ball-first contact and a divot past (after) the spot where the ball was struck. Tilting the spine away from the target with a driver promotes the necessary ascending (upward) strike. The hands should be even with the ball at impact, not in front of it as it is with an iron.

My left hip has rotated in a counterclockwise direction more aggressively than it would with an iron. Because the driver is the longest club in the bag and the most difficult to hit, it’s absolutely imperative you swing in the proper sequence.

Hip Rotation
One of the biggest mistakes recreational golfers make is sliding the hips laterally instead of rotating them in a counterclockwise direction (to the left for a right-handed player). The lateral slide tends to create a lot of problems that range from slicing and hooking to a lack of power. This mistake also has the potential to create physical injury as well.
The key to creating a swing that stores power and delivers it into impact is getting the hips more open than the shoulders as you deliver the club into the ball. By starting the downswing with an opening of the hips, you’ll allow the club to swing on the correct plane and attack the ball slightly from the inside. Also, clearing the hips helps maintain the correct spine angle through impact, which promotes a proper weight shift and ultimately, solid contact. Try to get your belt buckle facing the target at impact, and you should quickly see improved results.
Notice how open my hips are as the club reaches impact. This move helps create a ton of clubhead speed.

Doug Hammer is a Class A PGA Professional and Director of Instruction at Troon North Golf Club, in Scottsdale, Ariz. For more information, visit www.troongolf.com.

3 thoughts on “Impact: Driver Vs. Iron”