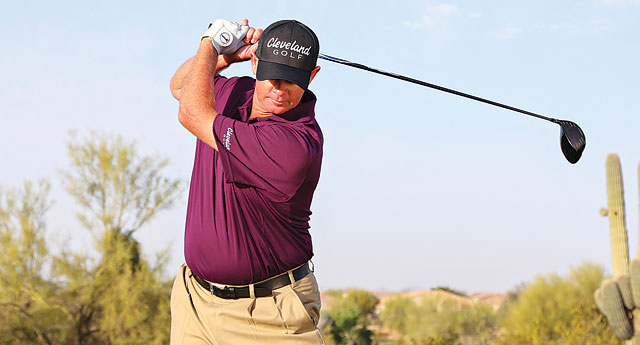 Bashing drives down the fairway is the best part of golf. So says me! A great drive sets up a low score, and when you're confident with your driving game, usually the rest of your game follows suit. Now, when it comes to lending advice on better driving, I like to keep things simple and easy to understand, and the reason for that is simple. Better drives come from less mind and body clutter. The easier you think it is, the easier it becomes. So read on, and start crushing it!

GET A POWER GRIP 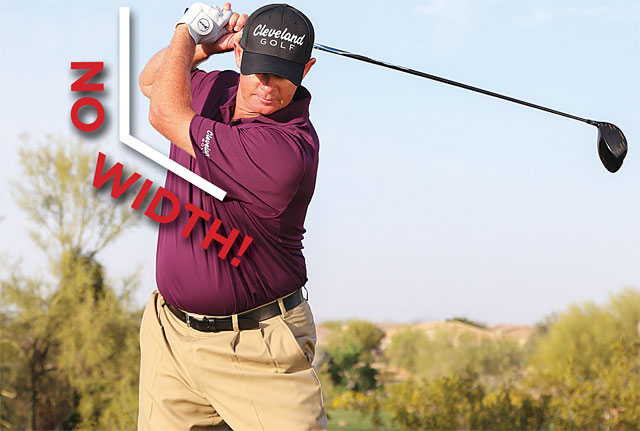 Looks really powerful, doesn't it? Not quite! I've given countless lessons to students who feel the trick for more power is to get the club wrapped around their neck, in a position that yields what I call a "fake backswing." Truth is, there's little power in this position at all. Anytime the hands get this close to the body, you're setting yourself up for a rough ride through to the finish.

That's more like it! Power and control come from having more width, better weight management and a greater rotation of the body–not from having the clubhead parallel to the ground at the top of the swing. In fact, I've seen some seriously long hitters with backswings no longer than you see here. The first secret is adding width. The wider you go, the more room you have to generate speed. I like to see the hands staying as far from my body as possible through the swing. Second, the relationship of the upper-body and lower-body rotation need not be ignored. For as far as my lower body rotates, I want to be able to rotate my upper body twice as far. You can see I'm doing that here by turning my hips 45__ and my shoulders about 90__.

Last, but not least, as you rotate and build width, your body weight will move laterally from side to side. Don't stifle it, and don't force it, either. If you stay wide and rotate, your body weight will shift on its own. So let it! In the top photo, my weight is actually still on my left side, whereas in the lower photo, you can see it's over my right side. Follow those keys for the backswing, and you'll hit it longer and straighter.

KEEP THE CLUB BEHIND YOU

If you've ever heard of "getting the club stuck behind you on the downswing", you're either a Tour player or a very advanced amateur. The reality is, most of us need not worry about getting stuck; instead, we should work on fixing the opposite problem, which is an early release of the hands and a forced rotation of the upper body, i.e., the over-the-top move that many amateurs have. This is where the club moves into the ball from outside the target line back to the inside of the target line. You can see that very unfortunate move from two angles in the middle two photos.

Instead, try and get stuck! Keep the club behind you and your back to the target as you initiate your downswing, and allow your body to shift to your left side before you bring the club down into the back of the ball. Don't spin out and lose the clubhead in front of you too soon. That usually produces some pretty gnarly results.

I doubt you'll get stuck! Allowing the clubhead to stay behind you will help you swing more from inside to outside the target line and force you to rotate your body through the strike (more on that in the next spread). Better players who "get stuck" do so because they bump and rotate their hips incredibly fast, sometimes so fast that the hands don't have time to catch up, hence, the blocked tee shots and smothered hooks from overactive hands trying to fix the problem. We mortals rotate our bodies a little less efficiently than Tour players do, so don't worry about getting stuck!

High-drawing tee shots usually fly longer than cut and sliced shots. Here's a quick primer on how to hit one. First, be sure and add some extra tilt to the shoulders as you can see here. In the top-left photo, I already have some good tilt in my regular shoulder position, but if I want to really nuke it, I add some more. I don't make any other adjustments to my normal setup and grip. I may tee the ball a little higher, but that's all. Just by adding tilt, I'm setting myself to hit the ball on a more ascending angle, which not only launches the ball higher, but it reduces backspin. I want that to hit a draw.

Now that you're going to hit it higher, you need to make sure you have a path from inside to outside the target line and get the ball moving out to the right first before it draws back to the left. To do this, set up with the number of your ball the way I have it here. This little visual reminder helps me remember to swing from inside to out as I imagine striking the ball right on the "1" of my beautiful Srixon Z-Star ball.

Now, I know that some of my fellow instructors who are Trackman whizzes may object to what I'm saying, but the point is to work on the feeling and sensation of swinging out to in, not what's actually happening at impact. Try it for yourself and strike the number on your ball!

AIM TO THE RIGHT!
Once you get the ball moving to the right, you need to understand what it takes to make it draw. For starters, it doesn't come from swinging the club more with the hands or flipping the clubface shut at impact. If anything, it's the opposite. Hitting a draw means hitting the ball with the face a little open relative to the target and closed relative to the path you swing the clubhead on.

SWING TO THE RIGHT!
What does that mean? First, don't stop swinging to the right. That's a must for a draw. Allow the clubhead to pass through the hitting zone from inside-out, and concentrate on the clubface being just a hair closed relative to the path, not to the target. You can make this adjustment at setup, and by experimenting with what grip/hand position on the club helps you meet the ball with the right face-angle direction (open to the target, closed to the path).

MOVE TO THE RIGHT!
Post-impact, keep moving to the right. At some point, the club is going to move back inside the target line, but as you can see here, I'm still rotating my body with some bias to the right of my target. It seems counterintuitive to swing to the right so much, but trust me, it's essential to hitting big, powerful draws off the tee.

Ballflight trouble? Sometimes it's better to think of a specific target and let your mind control the way you swing the club. Hey, I know that sounds a little out there, but it actually works. For instance, in the case of adjusting your trajectory, consider this mental tip. Think of a multi-pane window up in the sky above the fairway. If you wanted to hit the ball so it smashes through one of the top windows, what adjustments would you make? I'd instinctively add some more tilt in my shoulders and hang back a little more than usual to get the ball through the upper panes. Those are adjustments I make unconsciously, mainly because I'm more fixated on the window in the sky than I am on how my body is moving through the swing. Same goes for a shot through the lower panes. To break those windows, I'd level out my shoulders, maybe abbreviate my swing and get ahead of the ball a little more at impact in order to keep the ball low.

The point is, by changing your focus from the golf swing to a goal (which, in my case, is breaking imaginary panes of glass), my body responds in some pretty amazing ways. Try for yourself and get a buddy to record your swing as you visualize smashing through some panes in the sky. You'll see that as you focus on the result more than the swing process, you'll be more inclined to actually hit a wider range of ballflight patterns by unconsciously adjusting your swing than you probably would focusing on your swing motions.

I've never in my life, playing and teaching, encountered a solid ballstriker with a weak finish position. No joke, I've seen plenty of finish positions in my day, and some may look worse than they really are. For instance, Arnold Palmer's knee jerk and club swirl are add-on moves. If he didn't do that, his finish would be perfect. To further illustrate, look at one of my favorite positions on Tour: Adam Scott's. It's in perfect balance (by the way, that's me trying to emulate his perfect finish position in the photo to the right), and you can see how much his body has both rotated and extended through the shot.

Granted, I'm not saying we all can and should look like Adam Scott. But a good finish always finishes on your targetside (left side for righties, right side for southpaws), with the club to your side and not behind you. Also, notice how, in the good finish, my knees are close, my face is directly toward the target, and both my lower and upper body point to the left of the target.

When your swing is feeling a little off, or your rhythm and tempo aren't what you're accustomed to, take your mind off your swing and think of a pure, perfectly balanced finish position. In other words, think of where you want to finish the swing, not the way you plan on getting there. Sometimes, changing how you think will change the way you swing in ways you never would have imagined. Give it a try!

Andrew Getson has played professionally for several years around the globe, and now teaches at Grayhawk Learning Center in Scottsdale, Ariz. Visit www.AndrewGetsonGolf.com.

2 thoughts on “Get Long Fly Straight”