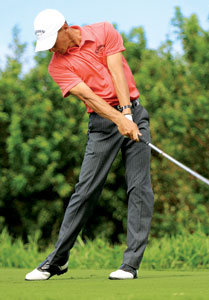 "How do those guys hit it so far? has got to be the most common question asked by recreational golfers in regard to the pros. Strength training, stretching, finely tuned equipment and lots of practice are certainly part of the reason, not to mention outrageous amounts of talent. But while it's relatively easy to understand why tall, strongly built guys like Tiger Woods, Ernie Els and Vijay Singh can crush their tee shots, it's not clear to most golf fans why a lot of the average-sized guys on Tour can do it, too.

The fact is that creating powerful golf shots is more a question of speed and leverage than size. Obviously, a taller player with longer arms is going to be able to create a larger swing arc and more potential power. But the key is that it's only potential power until that player learns how to unlock it. And this fact holds true for a golfer of any size. If you want to hit the ball as far as you can, you need to have a swing that can translate your potential power into yards._Ê_Ê_Ê

How It's Done
The golfers in this story were chosen specifically for their respective abilities to produce a lot of speed and power through the use of efficient mechanics. The drills contained in the following pages are designed to help ingrain the same.

The Connection
The connection Charles Howell III maintains between his upper left arm and chest is the hallmark of an explosive, yet synchronized swing that's powered by the body, not the arms and hands. At no time in the swing is this more apparent than just after impact when the body's pivot is still moving the club into the finish. This connection ensures the arms will stay close to the body where more leverage can be utilized with less opportunity for the club to move off the proper swing path. 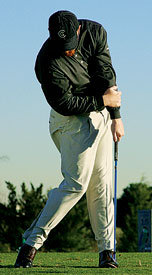 Great Extension
The terrific extension Howell demonstrates after impact can be very misleading. It may appear that his arms are long because they're tight and rigid. Nothing could be further from the truth. In order for his arms to look this long, they must be extremely relaxed. The proper sequence of the downswing shoots the arms out of the shoulders, creating a whip-like effect through the impact zone.

Power Sequence
Left Hip Clear
CHIII's right hand may seem to be rolling over the left after impact; however, this is a bit of an illusion. In fact, his body's rotation is in time with the appearance of rotation in the hands and arms and is the real power behind the release. While there's a minimal amount of forearm rotation through impact, Howell's arms and hands still remain in front of his body, with the butt end of the club pointing at the navel as it was at setup. This body release of the club is more powerful and consistent than relying on the hands and arms.

Left Arm Connect Drill
The purpose of the Left Arm Connect drill is to feel the proper sequence of movements that begin the downswing while experiencing the connection between the upper left arm and the chest, as Charles Howell III executes to perfection swing after swing. This drill is most effective without a ball. It begins with the left hand on the club and the right hand grabbing the left forearm/wrist from above. After swinging the left arm and club to the top of the backswing, pull up on the bottom of the left forearm/wrist with the fingers of the right hand. While lifting the left arm with the right hand, slowly begin the downswing with the feet moving toward impact. The rest of the body should begin to follow. As the body attempts to rotate into impact, use your right hand to restrict the left arm and, thus, the club from catching up. This will impart the proper feel of stretch in the left arm while serving to connect the upper left arm with the chest. After completing the drill several times, the proper sequence of movement should be clear. 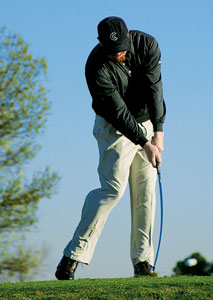 F + (SR -.80m) = P+E
footwork and weight off the right side = power and extension
Phil Taturangi

A golfer with surprising power is Phil Taturangi. At impact, notice how his right foot achieves a position in which the only part touching the ground is the sole of the shoe under the big toe. This may seem like a small detail, but it establishes several key ingredients of a powerful swing.

First, this right foot position moves the weight off of the right side toward the target. Second, the right knee is moved in the direction of the left knee, which provides room for the arms to stay down in front of the body. Finally, this correct footwork enables his left hip to rotate properly, which creates a firm left side to hit against.

Foot Action Drill
The purpose of the Foot Action drill is to feel the correct position and movement in the right foot from impact into the finish. Begin the drill by taking a normal address position. While keeping everything else in place, move the right foot so that the only portion of the shoe touching the ground is the sole under the big toe. The right knee will move toward the left knee and the left hip will open slightly and begin to straighten the left leg. The legs should remain in this position while you make a short backswing and move through to the finish. The right foot should end up fully rotated so that the only portion of the shoe on the ground is the toe, with most of your body weight on your left side.

Shigeki Maruyama creates a tremendous amount of power by making a very wide shoulder turn away from the ball. This huge windup creates three key factors of increased power. First, his upper body, including his head, is allowed to move away from the ball to the top of the swing, which facilitates a strong, powerful move back to the ball on the downswing. Second, the turn also creates a wider, longer distance for the club to cover on the downswing, which allows the clubhead to gain momentum and speed. Finally, by turning so dynamically, the body must rotate during the downswing to get back to impact. This produces more centrifugal force and a whip-like action of the club through impact.

Shoulder Turn Drill
The purpose of the Shoulder Turn drill is to create a more powerful coil at the top of the backswing. To achieve Shigeki Maruyama's turn, your left shoulder must be encouraged to end up well behind the ball at the top of the swing. A good reference point is the seam in the shirt that's on top of the left shoulder. Monitor this seam during the backswing to make sure your shoulder attains the desired position. Try making swings in slow motion at first, fully concentrating on completing your turn. When it becomes more comfortable, move on to full swings.

K.J. Choi perfectly demonstrates one of the most crucial elements of a powerful golf swing–a flat left wrist. The resulting on-plane downswing not only adds consistency by keeping the clubshaft pointed at the target line and the clubface square, but also creates power by ensuring that the hands lead the clubhead through impact. This sustains acceleration into the ball and prevents throwing the club from the top of the backswing with the hands and arms.

What's so apparent in Choi's golf swing is that the left wrist has become flat in the transition from backswing to downswing. This puts him in a perfect delivery position, with the area from his knuckles to his shoulder perfectly flat. 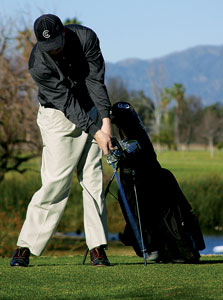 Flat Wrist Drill
A good way to instill a flat left wrist like K.J. Choi does, and produce more powerful strikes, is to place a comb in the watchband of your glove hand. By doing so, the lower portion of the left arm is made fairly rigid. With the comb in position, make several short practice swings to establish the sensation of the new position. Begin slowly to minimize the discomfort caused by the presence of the comb in your wrist.

The best pivot through impact on the PGA Tour may belong to Jonathan Byrd. As he approaches the ball, his left hip begins to open, or clear, which pulls his weight into his left heel and starts to straighten his left leg. There's no lateral motion in the left hip during impact, only rotation. This rotation allows him to hit against a firm left side and unleash his arms and club into the ball. His left hip and leg look much like a home-run hitter in baseball, and his ability to create power is similar.

Left Hip Barrier Drill
The purpose of this drill is to feel how the left hip should rotate on the downswing and into the finish. Using a golf bag with a stand as a barrier, place the bag slightly outside your left hip at setup. On the downswing, your left hip should turn, not slide, inside the headcovers on the woods without making contact with them and continue into the finish. This will help ingrain the feel of the proper hip rotation in the downswing and create more power.