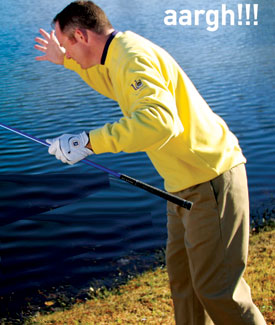 Editor's Note: This lesson on hitting easy drives was updated May 31, 2017.

The higher a golfer's handicap, the more pivotal the tee ball becomes. Driving the ball into water, rough, bunkers, trees and other hazards is what causes high-handicappers to rack up strokes. Easy drives are anything but. As players become more proficient, they develop skills to execute trouble shots and hit pitches from the rough and sand, putting less pressure on hitting fairways. It's almost as if good players expect to miss every now and then, feeling confident in knowing that they have the tools to recover from an errant drive. High-handicappers, unfortunately, don't have that luxury.

Fact: Everybody wants to hit more fairways. Even the best players in the world occasionally misfire and wish they hit more. That's somewhat encouraging, because it proves that great golf is attainable without always finding the short grass. The most common flaw among golfers who struggle with driving is a clubhead that travels on too steep an angle and far too much to the left of the target line as it approaches the golf ball (for right-handed golfers). This is what's called an outside-in swing. The typical results from such a motion are cuts, pop-ups, topped shots, big slices and smothered hooks—basically, the gamut of poor shots. What's confusing is that the steep, outside-in swing manages to work from time to time (especially with the mid- to short irons), leaving high-handicappers in a quandary over why they can hit their irons but not their driver.

If you fall into this category, here comes the bad news. The key to better golf is developing a swing that works well with the driver all the way down to the sand wedge. The swing to which I'm referring moves the clubhead from slightly inside the target line to slightly outside the target line on the downswing. Because short irons have shorter shafts, they require a steeper angle of descent, which is why every now and then a steep swing works well. However, it's too difficult for the body and mind to cogitate two swings in one round. For the high-handicappers who really need to hit more fairways, it's time to dump that steep and to-the-left swing (often indicated by marks on the high toe) and trade it in for a repeatable, inside-out swing motion that works well with every club in the bag. The good news: All you need are a few changes to your setup and swing.

Tidy Up Your Grip
How you position your hands on the handle often dictates whether or not you're going to have a consistent swing. First and always, grip with the handle more in the fingers, and make sure the V-shapes formed between your thumb and index finger on each hand are pointing at your right shoulder. This assures the proper hand position at address. It also serves as a governor as to how far your hands release, turn and roll through impact. In addition, it'll prevent you from collapsing your wrists and over-rotating or under-rotating the handle.

Set Up Right
Like skiing, golf often requires players to make certain moves that, on the surface, may seem counterintuitive. For instance, when you want to slow down on skis, you're actually supposed to lean downhill. In golf, when you want to avoid hitting the ball to the right, the correct adjustment is to—you guessed it—set up to the right. Many talented players have adopted a slightly closed stance because it practically eliminates an outside-in swing and promotes a steady right-to-left spin on virtually every shot. Often, when amateurs struggle with slicing, they intuitively aim more to the left, which actually enhances the cutting-across motion. Try experimenting with a slightly closed stance, with the ball positioned opposite your left armpit at address. This will encourage a fuller turn through the ball from the inside out and, most likely, will result in a hook or draw spin. 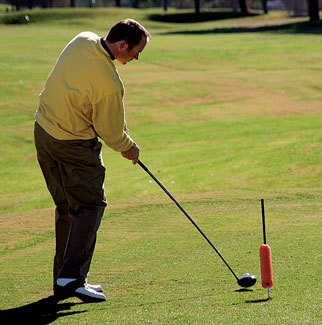 Turn On The Power
Most golfers who have the dreaded steep swing and outside-in swing path tend to take the club back much too quickly on the backswing. They rush it and, in doing so, find themselves trying to pick up the club without turning the body. When that occurs, so do a lot of other bad things. One way to alleviate this tendency is to begin the backswing in a slow, smooth motion. Practice your backswing as slowly as you can while still being able to hit the ball. As you turn back slowly, you'll find yourself getting your bigger muscles involved. Remember, the fastest part of the swing is directly after contact; as you take a longer, slower backswing, you're building more power.

Hip To Be Square
Every golf swing, no matter how good or bad, culminates at what we all refer to as the moment of impact. Numerous factors go into good driving, such as the correct swing angle, swing path, club speed, etc. Among the most important variables of the moment of impact is the face angle of the clubhead. The science actually is quite simple. An open clubface generates clockwise sidespin, sending your ball right, and a closed face produces the opposite spin to the left. Now, it's critical to understand that with a square clubface at impact, it's still possible to impart sidespin on the ball.

To illustrate, imagine a slightly inside-out golf swing with a perfectly square clubface at impact. Because the club is traveling from a slightly inside-out path, the ball is going to have a slight right-to-left sidespin, which in the air resembles a gentle draw to the left. That, my friends, is the ideal swing path. It's been proven time after time that draws fly farther and roll longer than fades and slices. Also, because we swing with a rotary motion at an angle, it's extremely difficult to repeat a swing that moves directly back and forward through the ball every time. An inside-out swing path is much easier to repeat, which is why it's the ideal swing path for so many golfers. If you can connect the inside-out path with a square clubface, you'll be on your way to longer drives and a lot more roll than that high, floating slice that almost appears to roll backward once it hits the ground.

To work on getting the clubface square at impact, think of only your left hand at impact. With a correct grip, the back of your left hand should be facing the target, your left wrist unhinged and not bent at the moment of truth. To practice this position, take a normal backswing, but atop your backswing, release your right hand and finish the practice swing with only your left hand, making sure your hand and clubface are square at the moment of impact. Not only will this give you more of a pulling-through sensation, but it also will encourage the proper left-hand position.

Path: Follow The Correct Line
The most ideal swing path for the driver is a shallow, level arc that originates slightly from the inside of the target line and finishes just slightly outside of the target line. As mentioned, golf is a series of chain reactions, so if you take the club back steep and off-path, you're most likely going to finish steep and off-path on the downswing. One way to practice attaining the correct path and angle is to take a golf shaft with no clubhead and slide a swim noodle over the shaft. Stick the shaft in the ground (see above) and aim it in the direction of the target with enough room for the clubhead to travel under the shaft without touching. Practice making a few golf swings in this manner and it will force you to start swinging from the inside out. If you do slip and go outside-in during the swing, you'll hit the noodle.

Try these drills, pay attention to your setup, and in a few short practice sessions, you'll be on your way to straighter drives. Better drives. Easy drives.

PGA professional and Senior Instruction Editor Chuck Winstead is the director of instruction at the University Club in Baton Rouge, La., and English Turn Golf & Country Club in New Orleans. Check out his entry in our 10 Best Swing Tips Ever.

Check out Donald Crawley’s tips for driving the ball straighter.

2 thoughts on “The Keys To Easy Drives”