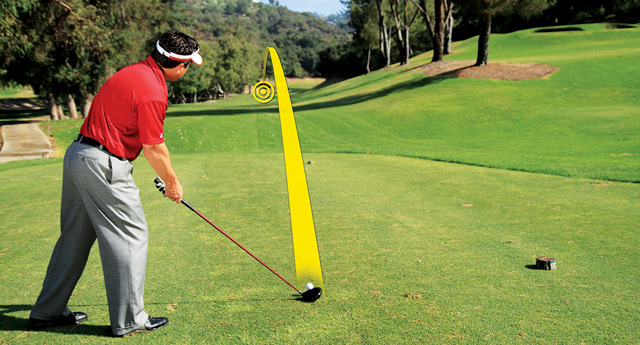 TOPS SHOTS HAPPEN when you lose the spine angle you established at address and stand up as you approach the ball. When you get taller, the bottom half of your club makes contact with the top half of the ball (see swing, above right). The result is a nasty top.

To stay in your spine angle throughout the swing, try the drill above, left. Place a stand bag (or some other stable, vertical object) so your backside rests against it. Then place your left palm on the butt end of your grip and, using only your right arm, make some passing motions as if you were swinging one-handed. Doing this keeps you centered, your head behind the ball and your posture nearly the same as it was at address. Make sure that, as you do this, you keep your backside against the bag. Don’t stand up! Now retain that feeling when you swing.

ELIMINATE THE BIG SLICE
GOLFERS SLICE THE BALL when one of two things happens: They have an open clubface or they swing the club on a path that travels from outside the target line to inside it. (In other words, they cut across the ball, just as tennis players do when they hit a cut shot.)

The easiest of these two faults to fix is your clubface position. Since most slicers lose the extension in their forward arm (and create the dreaded postimpact chicken wing shown in photo below), make sure your forearms touch each other in the followthrough (photo at left). Doing this closes your clubface through the impact area and minimizes side spin on the ball.

Once you’ve exaggerated your release a few times, your arms should be ready to release in the right way–not quite touching, but certainly not in a chicken wing!

AIM CORRECTLY
THE FIRST STEP to hitting the fairway occurs in your preshot routine.

First, choose a target (a distant limb, flag or discoloration in the fairway). Then stand be-hind your ball and see a line that runs from it toward the target. Mark a spot a few inches in front of the ball that’ll serve as your intermediate target. Then, aim your ball’s logo at the intermediate spot and set your clubface square to it. Lastly, line up your body so that it’s parallel to your target line.

As you can see here, I’m checking to see if my shoulders and hips are parallel to my target line. I don’t normally do this during my rounds, but I suggest you try it on the range. It’s a great way to make sure your body matches your target line.

OUT OF SYNC!
Boy am I way out of sync here! My hips have barely cleared, and my shoulders are level. I’m going to smother that ball low and ugly.

GET IN SYNC
TO START SWINGING in sync, try my pump drill. It’ll help you prevent your upper body from diving at the ball. It also makes it easier for you to initiate your downswing with your lower body.

Take a look at the four photos above. All I’m doing is taking a backswing and then coming down halfway until my hands are about waist high. My hands and my front knee move at the same time as I do this. (Feel free to try this with a training rod stuck vertically in the ground outside your left foot too, so your front hip hits it during the pump.)

Make two half swings, and then make a full swing on your third swing. Think, 1, 2, 3, hit, and you’ll start to swing in tempo, making cleaner, crisper contact.

To ensure that your swing is balanced, hold your finish for at least three seconds. On the driving range, hold it for even longer…until your ball lands. You’ll be amazed at how holding a long, balanced finish will change the way you swing. You’ll swing more within yourself, stop overswinging and make more consistent contact.

SWOOSH THE SHAFT
WHEN IT COMES TO TEACHING GOLF, visual imagery is a must for me, but I also rely on the importance of auditory feedback.
In this photo, I’m demonstrating an aural feedback tip that’s designed to help you time the release of your shots. Follow these three steps, and you’ll release the club perfectly every time.

1. Select your driver or other wood.
2. Turn it upside down so you’re holding its hosel. This lightens the club and makes it whippy.
3. Make a normal swing and concentrate on making a swoosh sound close to the impact zone.

If the swoosh sound happens either before or after the intended impact zone, you’re releasing the club too soon or too late. When that happens, I guarantee you the clubface will never be square.

HOW TO CHOOSE THE RIGHT DRIVER
1. DEMO IT. Nothing beats trying a new club. You may even surprise yourself with how well you hit a driver that doesn’t match up to your specs. Go to a demo day or test out a club at your home course. Don’t take only one swing. Hit it a number of times. If you can, take it out on the course and try it under pressure. It’s the best way to know how it’ll perform when you need it the most.

2. GET FIT. This is a great way to know the specifics of your game, which you’d never know by just hitting the ball. Learning your swing speed, ball speed and spin rate can help you get a better idea of what you need to play with.

3. IT’S TEMPTING to buy the latest high-tech offering that you see the pros using, but it might not be the right club for you. Their clubs are built specifically for them, and chances are, if you have a handicap in double digits, their specs aren’t going to sync with you. Be realistic–take advantage of the player-friendly clubs out there if that’s what helps you keep the ball in play.

JUST THE RIGHT SPIN
BETTER PLAYERS often struggle with spinning the ball too much–not only with wedges, but with their drivers, too.

Consider the two positions I’m in here. On this page, I’ve released my hands way too soon and have hit the impact bag with my hands far behind where they should be. I’ve flipped my wrists, which will cause all sorts of problems, including a loss of power, hooks and high trajectory.

Now take a look at the photos on the opposite page. See the difference? My hands are farther ahead, and my left arm is flush with the left side of my body. I’ve used my body, not my hands, to release the club and, as a result, have generated big power with just the right amount of spin.

AVOID THE HIGH BALL…
TOO MUCH SPINE TILT, as you can see above, where my shoulders angle far away from the target (and my left shoulder goes up too much), creates far too great an ascending angle into the ball. This results in a high launch or balloon ball that shoots high in the air and loses major distance. (It’s also really hard to control if you’re playing into the wind!)

To keep your shoulders in a more advantageous position, do the Gary Player drill. What’s that? Simply finish your swing by literally walking through your shot, taking a forward step with your back foot on your followthrough. Doing this gets you moving to your left side, so you don’t hang back with your lower and upper body.

…AND THE LOW BALL
THE POSITION I’M IN here is perfect…for an iron shot. Unfortunately, I’m not hitting an iron, I’m hitting my driver.

Notice how level my shoulders are? They’re practically parallel to the ground. That’s not what you want to do when hitting a ball that’s teed up. Instead, you want to tilt slightly away from your target, so you hit the ball with a slightly ascending blow. (Notice how my clubface is descending here? This shot will be low at best and a pop-up at worst.)

As you swing, clear your hips first (see photo below), and your shoulders will con-tinue to tilt slightly away from the target. You’ll make contact with the ball on the top portion of the clubface, the perfect area from which to launch the ball on the right trajectory.

DISTANCE OR ACCURACY?
THE DEBATE ENDS HERE. Distance trumps accuracy–big time. At least when you look at the current PGA Tour stats. As of publication, the Tour’s top five Distance Leaders finished in the top three nine times (Bubba Watson and Dustin Johnson have both notched victories) and have earned a combined $7.7 million. As for the Tour’s Driving Accuracy leaders, the top five players earned a combined $5 million and only managed three top-three finishes (Tim Clark captured The Players).

So what does this mean for you? Well, not a whole lot unless you’ve got the strength to muscle your approach shots out of the rough like the pros. Most amateurs would still be served best by driving more accurately. It’s also important to remember that when Tour pros miss the fairway, they don’t miss it as often or as wide as many weekend warriors.

In the quest for a better golf game, get your shots traveling in a straight line first (Omar Uresti, 75.76 percent of fairways hit), and worry about becoming the next Robert Garrigus (318.2 yards off the tee) later.

WITH NO X FACTOR, I LOSE A LOT OF POWER.

Power comes from the hips rotating less than the upper body on the backswing. If they both turn 90 degrees, there’s no torque strength!

BOOST YOUR DISTANCE
TO HIT THE BALL FAR, you need to maintain a coil in your backswing and a good extension.

Take a look at the photo bottom right and above. Notice two things:
1. My left arm has collapsed into a 90_¡ angle.
2. I’ve lost all my coil, rotating my lower and upper bodies the same amount.

When I combine both of these power leaks, there’s no chance that I’ll hit the ball very far at all.
Instead, keep your left arm straight (but not stiff). Doing so widens your arc and moves the clubhead that much farther away from the ball, making it easier to generate speed. Also, rotate your upper body so that your back is to the target, but your hips are about half as far.

A good drill or exercise to ingrain that feeling is to pause at the top of your swing and feel the brace in your back leg. Keep your leg flexed. Swinging like this may be a challenge for some of you, so don’t push it if it isn’t comfortable.

STAY CONNECTED
BETTER PLAYERS’ front arms often get away from their chest at impact and beyond. This separation causes inconsistent contact.

To remedy this situation, place a headcover or towel under your arms and make a swing. If the headcover falls out anywhere during your swing, your arms are separating from your body. (Notice how it falls out in the above photo. Notice also that, in the followthrough, my arms are far apart. I really blocked that shot.)

Practice this drill a few times, then remove the headcover and make some swings, remembering the feeling.

One thought on “Drive 4 Show”