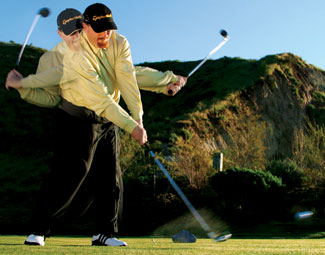 The well-worn cliché “drive for show, putt for dough” is familiar to most golfers, but heeded by few. Hitting big drives is, in fact, often the most desirable accomplishment in the game for many recreational players, most of whom are less concerned with score than the bragging rights that accompany a long drive. Players who are interested in shooting good scores, however, know that accurate driving, or strategically positioning the ball off the tee, is a critical part of playing solid golf, and sometimes mandates the use of different clubs.

3-Wood
Use the greater loft of a 3-wood to lessen damaging sidespin without losing significant distance.

The 3-wood is not only more forgiving than the driver, but it’s also much easier to intentionally curve, which can come in handy on doglegs and is genuinely useful when you absolutely need to hit the fairway. To learn to curve the ball on command with your 3-wood, you have to understand the key elements of both draw-inducing and fade-inducing swings. From there, it’s only a matter of visualization and practice to establish confidence.

3-Wood Draw. The key to producing a draw with a 3-wood is learning to approach the ball from inside the target line. If you look at the photos at left, you should see how the club moves away from the ball to the inside of the target line on an arching motion. Furthermore, notice how it points slightly to the right at the top. These two moves help ingrain the “round” feeling needed to produce a draw and also to position the club so it can approach the ball from the inside (see the last two photos at left). Notice how round this swing looks—this is what you need to visualize while practicing the shot. A 3-wood draw moves to the inside on the takeaway and comes from the inside on the downswing. In the finish, the club should point to the left, and have a more “around” look.

3-Wood Fade. A fade is produced when the club approaches the ball from outside the target line. Notice in the sequence at right how the club moves away from the ball on a more outside path, then points to the left in a laid-off position at the top. This is the opposite of what’s needed for a draw, yet necessary if you want to get the club into position to approach the ball from outside the target line. On the way down, the club again moves to the outside and comes slightly across the ball, finishing in a more vertical position. For both fade and draw, allow swing path to produce the curve without undue manipulations.

Fairway Finders
On top of the fairway wood heap is the Cleveland Launcher Comp, featuring an ultra-lightweight, tri-ply carbon-fiber crown and a lower and deeper CG placement for enhanced forgiveness and accuracy. TaylorMade’s r5 dual sports two pretuned TLC tungsten weight cartridges in the heel area of the clubhead for increased playability and a resistance to slicing. Izzo’s Zwood has a 275cc clubhead and tungsten sole weighting for the ultimate in user friendliness. Callaway’s Big Bertha is a classic design with stainless-steel construction and an updated version of the WarBird sole.

Hybrid
They’re shorter and, therefore, easier to control. When the fairways run tight, your hybrid wood can be your best friend.

On holes that provide a lot of run and on shots hit into the wind, opt for a hybrid club and a low, hard draw. To execute a hybrid running hook, begin by setting up with the ball slightly back in your stance, which should be slightly closed.

To ensure a low, right-to-left ballflight, hood the clubface just a bit by turning the toe of the club toward the target. Once you have the setup, concentrate on taking the club away on a slightly inside path, just as you did with the 3-wood draw. Stop well short of parallel, and be sure to hit down more than you would on a typical, sweeping fairway shot. On the way through the ball, the hands need to turn over, with the right hand resting above the left, and the right wrist staying bent. These last two items are the most important because they’re what contribute most to the execution of the shot. When you practice this, be absolutely certain to focus on maintaining the bend in your right wrist all the way through impact, and try to turn your right palm toward the ground.

Hot Hybrids
The pool of top hybrids includes the Rescue MID from TaylorMade, with a double-crown design and a low CG for a combination of distance and forgiveness. The JMAX Tour Iron-Wood from Tour Edge is constructed from hyper steel and features a hollow body, a tungsten sole and minimal offset. Mizuno’s FLI-HI CLK is built with a carbon crown and three variable face thicknesses, making it the most high-tech hybrid and an excellent choice for players of all handicaps. Cleveland Golf’s HALO utility club is available in a wide range of lofts that make it an ideal long-iron replacement.

Driver’s Ed
The first step to getting the ball in the fairway on a more consistent basis is accepting the fact that the driver isn’t always the best option. Drivers are the longest and lowest-lofted clubs in the bag, making them tough to hit accurately, even for the best players in the world. In addition, the distance provided by a well-struck drive simply isn’t needed on many golf holes, making it difficult to substantiate the risk associated with hitting the big stick. Instead, the best way to immediately improve your driving results is to learn to use clubs other than the driver, (i.e., the 3-wood, hybrid club and long iron) more effectively. But knowing how to hit these clubs isn’t all there is to it—you also need to know when to hit them. Follow some of my suggestions, and you’re sure to hit more fairways and shoot better scores.

Now, don’t get me wrong; the driver isn’t a club that needs to be stuck in the closet for good. But being prudent about when and where not to pull it out can have a significant effect on your overall game. Although there are no hard and set rules concerning the use of the driver, there are some guidelines that, when followed, can save you more than a few strokes over the course of a round. First, avoid hitting driver on holes that are excessively tight, particularly those that spell trouble on the side to which you generally miss (if your tendency is to hook, avoid hitting driver on a hole with water on the immediate left of the fairway). Even if you end up facing a longer approach shot, it’s much smarter to hit less club off the tee than risk an OB tee shot, which is something any golfer who plays for a score has to avoid at all costs.

You can feel free to leave the driver in the bag when facing either a short par-4 (anything less than 380 yards) or a long par-5 that you can’t reach in two with even your best drive. Both these situations are ones in which amateurs almost always reach for the driver, but shouldn’t. On any shorter par-4 hole, you should always think of position first and distance second. Get the ball in the fairway and believe that your iron swing and short game will get the job done. When it comes to long par-5 holes, which you know you can’t reach in two, hitting the driver serves no purpose, except to increase the risk without the probability of a worthwhile reward. 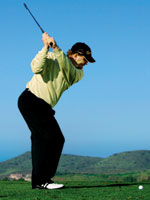 Long Iron
The ultimate shotmaking weapon is a valid choice on windy days and if your preferred ballflight is a fade.

Punch It!
Although the popularity of long irons has waned in recent years due to the popularization of hybrid clubs, a lot of people still carry them. If you have long irons in your bag, one of the most useful tee shots you can learn is the punch fade. The thing to remember about this shot is it won’t run nearly as much as a shot that’s turned over, so you have to aim accordingly.

This can be a very useful shot on short par-4 holes and at times when you’re hitting into a crosswind or a strong headwind. To execute the punch fade long iron, begin with a slightly open stance, with the ball more toward the middle of your stance. The backswing should be more upright to encourage a steeper angle of attack while the right arm extends against a bent right wrist. Through impact, it’s critical that you don’t allow the right hand to release over the left. Instead, keep the left hand and arm above the right, with the right wrist bent throughout the shot. This will effectively hold off impact and create the desired low, left-to-right ballflight. Also, you need to be aggressive with your body movement, making sure it leads the club and never allows it to pass, even beyond impact. When it comes to the finish, be sure to abbreviate the movement of the club and clubface—otherwise you’re likely to get some ballooning shots.

Hybrid Irons
The MacGregor V-FOIL
Go Long features an iron-style design with concentrated mass and perimeter weighting that’s said to deliver control and accuracy. Bridgestone’s J33 AirMuscle has a hollow body designed to create greater trampoline effect for greater distance, while the sole provides versatility. The Nike Golf Pro Combo is a true iron-style hybrid with a 70g insert for a low CG. PING’s G2 HL is designed with an extremely wide sole and undercut cavity for extra forgiveness.

Hold On!
To many, this finish position probably looks a little unorthodox, or just plain ugly. The fact of the matter is just about any good player will utilize this type of position when executing a low-trajectory fade. Notice how the right arm is almost completely straight while the right wrist is still bent back—this combination is critical for solid, compressed contact. The left elbow is also slightly bent, or “chicken-winged,” which helps create the desired left-to-right shape.