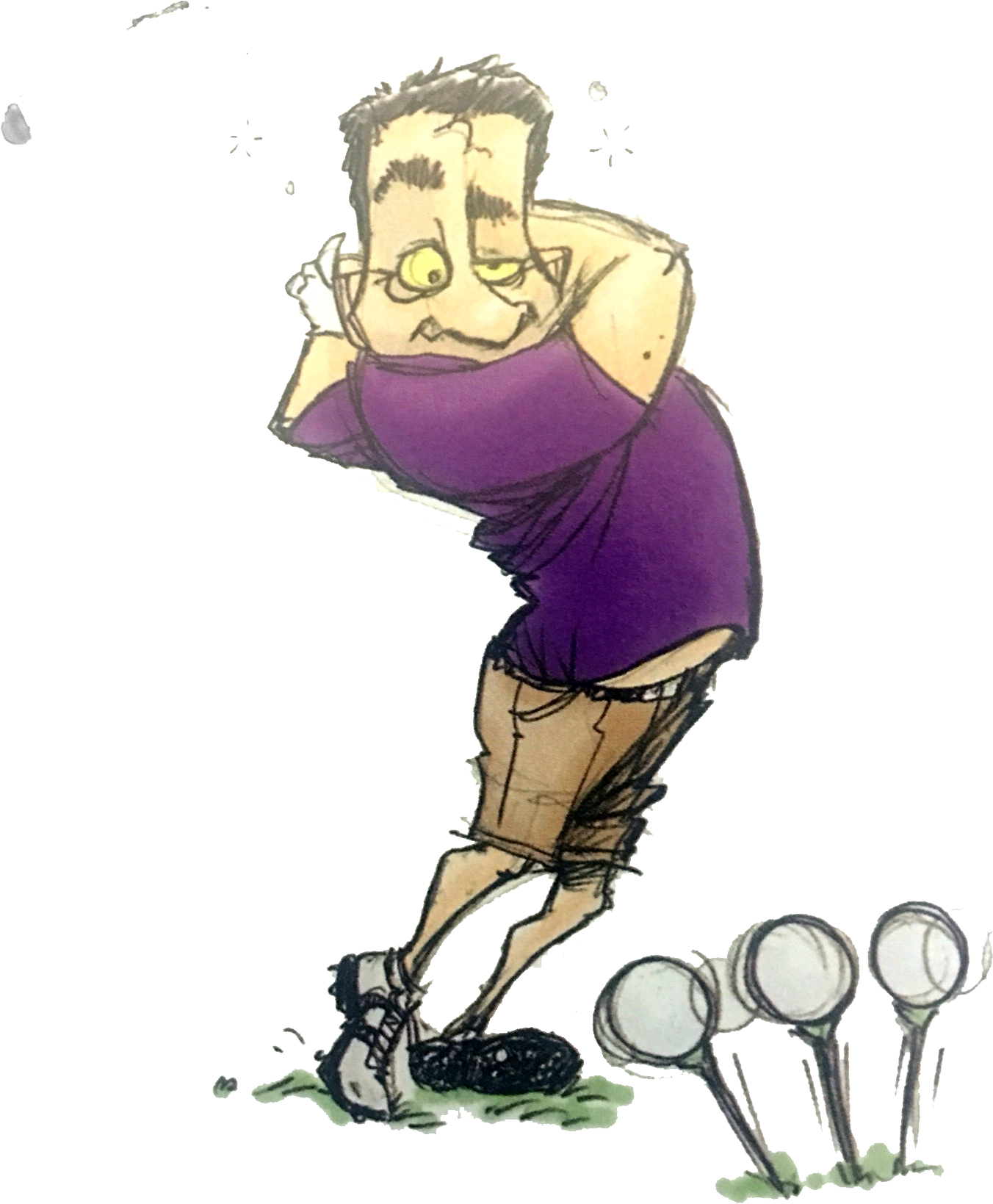 Note: The news that a man identified as PGA Tour and European Tour player Thorbjorn Oleson had been arrested after an alleged drunken rampage on a British Airways flight following last week’s WGC-FedEx Invitational brought to mind this piece I wrote for Fairways + Greens Magazine in 2006, whose original title was “Drinkin’ And Drivin’.” It strikes me as a great golf tip, of a sort.

Though it refers to a much different behavior and situation — imbibing while playing golf, not afterwards — I think it resonates with any golfer who likes to enjoy a drink or two as part of his or her experience of the game.

I have edited it slightly for timeliness and continuity. And, by the way, I have lived up to my own challenge … mostly. Golf is hard enough.

He just had to tell it again.

We were in a bar. The telling always happens in a bar — the birthplace of many a yuk-worthy yarn, fictional or otherwise. This story happened to be true, and if a certain friend of mine has any say in the deal, I may never live it down.

This time it came up during a trip to Louisville, four days after the Kentucky Derby, where bourbon-spiked mint juleps flow by the megagallon, filling Churchill Downs’ infield with a sea of swaying, semi-conscious hell-raisers, some of whom might even be horseracing fans.

In town to play Valhalla Country Club and wager on a few ponies in between, we couldn’t help but feel the blood of the Bluegrass State (i.e., bourbon) coursing through our dinnertime conversation. And that led to a tale that’s already the stuff of legend though it’s only three years old.

“We were in Vegas,” began my compatriot, “And Vic was on Atkins at the time, so he was just drinking clear alcohol” [Editor’s Note: Make that Grey Goose on the rocks with a twist, no carbs, plenty of punch].

“We were hanging out at Tequila Joe’s at the [now closed] Imperial Palace, it was getting late, and suddenly the cocktail waitress says, ‘Hey, Vic, you doing OK?’ I looked at him and he was sitting like this.” He put his elbows on the table and rested his chin in his hands, eyes closed, mocking my semi-passed out pose. Guilty as charged — I was hammered.

Fast forward to the next bleary morning, when my buddy picked up the plot.

“We had played Royal Links earlier in the week and like it so much that we decided to play it again. The only tee time they had was 7:30. And Vic was still half drunk.”

Then he proceeded to pantomime my painful, lame, slow-motion first tee routine: Bending over ever-so-gingerly to put a peg in the ground, nearly falling ass over spikes to balance a ball on the damn thing, standing up with a wince of pain, lining up my drive for what seemed like forever, stepping into my stance as if in a fog and swinging as if every joint in my body was set to explode — a weak bunt toward the tall grass on the left.

I laughed again at the sight of my own stupid, hungover self as performed by my light-drinking friend — and laughed even harder as he further described my helplessness at the turn (where I chucked a ten spot on the tee box, hopelessly surrendering our ongoing bet), then related my miraculous back nine comeback when, with the help of an immensely patient caddy named Mike, I woke up, caught fire and won back my money, plus my buddy’s money, on the final hole.

The Lord moves in mysterious ways, but even He can’t keep up with the spirits of the bottle. A whole lot of us welcome them across the threshold of our lips on a regular basis, drop by evil, poisonous, delicious drop.

Sages through the ages have decried the foul effects of demon alcohol even as they reached under the counter for that hidden flask or squeezed the last drop out of a bota bag. Says America’s reigning rock ‘n’ roll sage, his Bob-ness Mr. Dylan, “Alcohol will kill anything that’s alive and preserve anything that’s dead.”

Wise words, those. And true enough. But still we drink.

And some of us drink and drive — from the tee, that is (never behind the wheel, right?). For golfers, ol’ Zimmy’s aphorism translates thusly: “Alcohol will kill any ability to play the game but enhance a drunk’s belief that he still can.” Pardon me for the comparison, but it’s a lot like sex; wrote another scribe whose name escapes me, “Alcohol increases the desire, but decreases the performance.”

I have yet to see a player outside of John Daly (and “Dutchie,” an old coot I knew as a kid, whose lefty swing looked like an unhinged barn door) whose score actually improves after a few cocktails, though many of us talk of  “aiming fluid” and “courage in a can.”

I’ve certainly fallen victim to that line of sideways thinking. These days I try to keep my on-course intake to water and Gatorade with the occasional barley pop foray, but I can remember — somewhat —wobbling over a putt late in a beer-soaked round as if I was fighting a 50-knot wind, or feeling my legs turn to rubber and my brain to frazzled mush after one too many.

And the antics I’ve seen from playing partners and other groups in 30-some years of playing could qualify for some Dumb Ass Drinkin’ Hacker Hall of Fame.

During one summer tournament in Reno, on a very hot day, I watched the f-ed foursome in front of us slide off a cart patch and dump their vehicle into a pond near the tee box, submerging it up to the seats — then leaving it to drown as they yanked their sticks off the back and staggered up the fairway, as if they’d expected to pull such a prank.

I’ve watched guys all but pass out between shots, normally soft-spoken blokes get loud enough to merit immediate dismissal and otherwise pacifistic types to come to near-blows over a slurred comment or rules gaffe.

No doubt about it: The world’s fairways are loaded with loaded souls, and if we don’t count ourselves among them (I obviously do, especially if I’m in Vegas and on leave from my senses), we definitely know someone who fills the bill — and overfills the gullet while replenishing the cart girl’s coffers. She isn’t just the most popular person on the course, she’s a vital revenue source.

You won’t come across too many beverage carts in the United Kingdom, the game’s birthplace. Yeah, they’ll pop up on a newer resort track now and then, but on the Old Course, Turnberry or Royal Liverpool — which I had the honor of playing in 2005, nine months before it hosted the British Open in July — no way. If you want a nip between niblick shots, you’ll have to pack your own. Or ask your caddy to share.

And that’s OK; the game’s deepest roots are soaked in scotch and ale, and many a ruddy-faced looper (and his appointed charges) have negotiated their way through the damp and chilly seaside corridors of the world’s great links with some liquid fortification. It’s just that out of respect for tradition, the Brits, Scots and Irish don’t litter their hallowed ground with spent cans, like we brash and beer-fogged Yanks sometimes do.

Well, maybe the Irish slip up once in a while. At the very least, they know how to mix golf and liquor to spectacular effect.

Just ask CBS commentator, Cobra pitchman and first-class wit David Feherty, who in his hilarious 2005 book An Idiot for All Seasons describes winning the Dunhill Cup for his team on the Road Hole at St. Andrews while blasted on some home-brewed swill handed to him by an ancient caddy “with a face like a half-chewed caramel.”

“They gave each of us a nice trophy, and I remember filling it with something special and passing it around the lobby of the Old Course Hotel,” he told me before the 2005 Byron Nelson Championship. “I was the poster child for excess, probably legally drunk since I was 25 years old, but I was so spectacularly good at it that nobody noticed.”

He has a hundred other yarns like that one, the wicked war stories of a talented boozehound. He was a strong enough stick to play through the alcoholic fog — a gift precious few of us share — but eventually it caught up with him. He lost interest in the game, and while he remained the life of the party and never lost his game with a microphone in his hand, his beloved Old Bushmill’s put him on the brink of suicide and nearly cost him his family.

“A bottle and a half is what I would drink each day, and I wouldn’t start to see any difference until the second bottle. It was way too easy; it wasn’t a challenge anymore.”

Feherty has since sworn off the stuff, save for one relapse last summer for his dad’s 80th birthday in Ireland. He once told Golf magazine that he stills “feels like a f—in’ drink,” but he’s smart enough to know that when a character flaw (or in his case, an out-and-out illness) takes hold of your life, it’s sort of like a swing flaw. You’ve got to weed it out then keep it at bay diligently, day after day. And all it takes is one bad swing (or for a guy like Feherty, one little drink) for all hell to break loose.

Still, I’m not here to get all moralistic. I’m just treading a bit lighter across the landscape of life these days, recognizing that getting goofy on the golf course might not be the best role model’s route.

I don’t see myself turning into a teetotaler anytime soon, but now that I’m officially middle-aged and I don’t have the time or inclination to practice my game, I’ve got to find a way to keep it together without too much effort. And that means saving those cocktails for the 19th hole.

I’m buying. And calling an Uber.