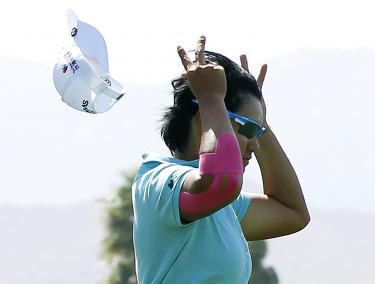 Golf weather is the one “club” we all carry in our bags. We have no choice but to lug it. The elements greet us on every first tee and will change on us in a blink.

That happened to me recently at Silvies Retreat, Links and Spa in eastern Oregon. The day dawned a bit chill and cloudy, and held that form until around noon, when I was on the back nine of the Craddock Course, half of the resort’s , reversible 36-hole, 27-green big-course complex (it also has a nine-hole par 3 course and a new 7-hole-plus-bonus-hole routing called The Gauntlet that offers goat caddies). The rain started, a few peals of thunder and distant lightning strikes. I decided to wait it out. Then the rain turned to a pounding hail, and I was outta there.

I’ve played golf in every weather imaginable, including snow, but hail? No thanks.

Here’s a screen shot of a video I took during the white deluge:

Of course, it passed in a half hour or so.

But let’s focus for a moment on golf in the wind. It’s in the game’s DNA, bred on those gale-sculpted Scottish dunes and carried forward through the ages, into the scorching deserts, chilly mountains and sultry tropics that, thanks to technology and human willpower, comprise the many climates that surround the modern game.

I find myself thinking about how much wind affects not only how we play, but what we think, or force ourselves not to think, when a steady 30 mile-per-hour sideways blow carries a once-perfect drive into a bunker or worse, or pushes a putt offline, or spits sand back in our faces.

The world’s best female golfers took on such elements in Scotland as the European Team outlasted the U.S. in a thrilling Solheim Cup, and that got me thinking even more about how the elements shape every round.

Then I came across this video from Tour player Cole Hammer, having some fun as he warmed up on the range at Royal Liverpool, otherwise known as Hoylake (which I’ve played, by the way, in a driving, constant rain).

He tees up a ball with a wedge, sends the all aloft, then waits for its return, hauling it in like a centerfielder.

Been there, done that, if only by accident.

We have two choices when playing in the wind: Deal with it with smarts and savvy, as all better players do, or allow it to sail between our ears and clear out any sense of strategy or humility.

We shouldn’t fight it, we know we will lose, but sometimes we just can’t help ourselves, and we rack up some seriously nasty numbers.

So, I decided to look up a couple Golf Tips feature that offer detailed guidance for playing in the wind. First we have this cool feature on “reading the breeze” by a meteorologist — using some Tour pro examples to illustrate the importance of paying attention to and even embracing the wind’s vagaries and mysteries — and this classic instructional feature by a Scotland-based teaching pro who knows a thing or two about making the best of what howling links golf hands you on most days. It’s called “Score From Anywhere,” which assumes, obviously, that the wind can put you in some precarious spots, even after a relatively good shot.

Give them a look, and you’ll be ready to face that next breeze blast with a bit more confidence, and, yes, calm.