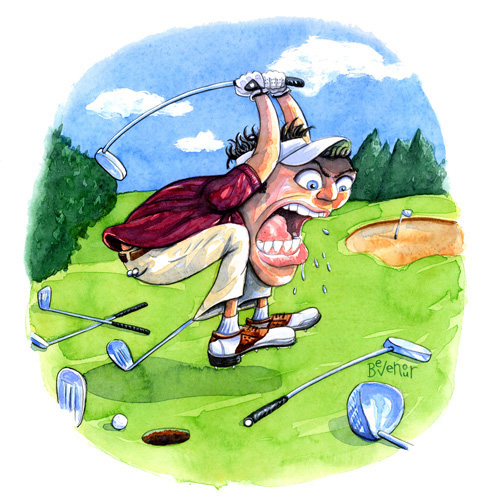 Editor’s Note: Sergio Garcia’s recent disqualification at an event in Saudi Arabia due to his angry outbursts — one in a bunker, others that resulted in him damaging several greens — spurred Golf Tips editor Vic Williams to revive this column, which originally appeared in Fairways + Greens magazine in 2002. It’s both a personal come-clean story of a father failing his then-teenage son and a cautionary tale of why golf course anger is the ultimate card-wrecker.

The day I can walk off a par 5 with a smile and a shrug after carding a 12 is the day my education is complete. Or maybe that’s when it begins.

All I know is, after three decades of taking my golf game much too seriously, of making an art form out of temper tantrums, of earning nicknames from “Hack” to “Ivan” (as in The Terrible) and occasionally distinguishing myself as a playing partner to avoid, I’m finally learning to change my attitude.

I don’t get the chance to tee it up with him too often, but when we do, I’m impressed with how he handles the game’s inevitable, delicious, confidence-challenging ups and downs. Shooting well north of 100 doesn’t faze him. Nor does the aforementioned 12 on a par 5, which he carded on the notorious 600-yard No. 13 at Genoa Lakes Golf Club on a chilly spring day recently. He just laughed it off with a casual shake of the head and asked if he could drive the cart for a while — the standard teen request.

Though he toys with competitive golf as a member of the Wooster High School golf team in Reno, score is far down Alex’s priority list, ranking even lower than swing mechanics (he’s only had a couple of formal lessons).

None of that stuff matters. He chooses to put a premium on camaraderie, and I’m pretty sure he treasures the chance to play a great golf course with the old man.

I feel the same way. Since Alex and his sister live with their mother, I see them one day a week on average, usually Sundays. Quality time is a rare and beautiful thing — put golf in the picture and it’s heaven.

So on that spring day at Genoa Lakes I did my best to play by Alex’s example. We cheered each other on, shared laughs with our playing partners and generally had a great time, though looking back I’d give myself a B-minus at best. I let some verbal self-abuse slip through here and there and couldn’t help but bang a few sprayed drivers or bladed wedges on the turf. After my usual round in the mid-80s I punished myself about the score that could have been.

At age 41, I still fight the urge to indulge in what I can only describe as “overdramatic  dissatisfaction.” Such histrionics are OK for the world’s best players (few of whom choose to make them visible to the outside world), but for a spastic-swinging wannabe like me, they’re a ludicrous waste of karma and mental energy. As Peter Jacobsen told the late Jack Lemmon, his longtime AT&T Pebble Beach Pro-Am partner, after the first of many missed cuts: ‘Hey, Jack, you’re not good enough to get mad.’

Neither am I, but I get mad anyway. It’s a flaw in my perfectionist personality, and I accept it to a point, but not at the risk of alienating or embarrassing my kid.

Not to say Ivan hasn’t shouldered his way into our father-son relationship. About four years ago Alex and I were playing Northgate Golf Course in northwest Reno. I’m not sure if I was suffering through a biorhythmic triple low or was somehow possessed by the worst part of Bobby Jones’ spirit — the part that reportedly threw clubs and wallowed in foul verbal waters — but I was an out-and-out jerk that day. A nasty case of the shanks had invaded my iron play, every tee shot seemed to find the sagebrush, every putt was way off the mark. By the turn I was in total meltdown.

“Ivan” turned what should have been a precious outing with Alex into a profanity-laced ordeal. One of our playing partners apologized to him on my behalf. Eleven-year-old Alex just smiled and said, “It’s OK.” It wasn’t, of course, and I’ll always tag that afternoon as the low mark of my life in golf. Ashamed isn’t a strong enough word.

Then there was a round two summers ago, a 100-plus-degree July day that found me escorting Alex and two other teenagers around the steamy wetlands of Rosewood Lakes. From the first tee I descended into that familiar level of self-imposed hell where I become the most important guy on the course and every shot is life and death. I’d hit and walk ahead of the boys, offering little encouragement or praise , setting few examples of how to behave as an experienced practitioner of this blessed game.

I found myself getting more impatient with every sun-baked step. It took us nearly three hours to negotiate nine holes, and I took every chance I could to tell Alex to “step it up” or “get moving” — not in the interest of the group behind us (there wasn’t one), but only to make sure I was as miserable as possible. By the time we putted out and headed in for a cold drink, the boys had had enough of me.

What was I thinking? I could have savored every moment of those three hours, but now they’re gone forever, as are all the other rounds I’ve squandered. It’s a wonder Alex doesn’t hide his sticks in the darkest reaches of the garage and wax disinterest whenever I invite him out for a quick 18. It’s a wonder he hasn’t disowned me.

Now he’s a man, mature for his age, a nearly straight-A student who has survived a lot of parent-inflicted emotional distress over the years. He massages his frustrations in other ways. Rifle practice with ROTC. Paintball wars with his buddies. Nuke-’em-up video games. But not through golf. He instinctively recognizes the gentlemanly nature of the game. It’s a haven for him, an outpost of calm in an otherwise storm-tossed world.

So where did I go wrong with my own attitude … and right in guiding his?

Perhaps I haven’t been as boorish as I think. Perhaps Alex is smart enough to recognize my idiotic behavior as an example of what happens to otherwise rational people when they take a simple game much too seriously. My negative approach has reinforced his positive one. And I, in turn, recognize in him the golfer I was meant to be, and want to be still.

That’s why I resist giving Alex too many technical tips or stroke-saving strategies. I’d rather see him have fun on the golf course, and I revel in following in his footsteps. If he wants to get serious and start making numerical goals like breaking 90 or hitting so many fairways per round, it has to be his choice. I can’t force improvement on him — and is that really the kind of “improvement” he wants, anyway?

I think that’s a solid policy for any parent who spots the slightest bit of athletic talent in his or her son or daughter, whether the sport in question is golf or basketball or hockey: Make the game available to your kids and let them make the most or least of it on their terms. Even Earl Woods insists he didn’t force golf on his son. He didn’t suck all the fun out of it, or worse, let Ivan step in and turn the game into a chore instead of a calling. Earl just set the course for success and let Tiger (and his teachers) do the rest.

But is Tiger having fun out there? Of course he is — even on his off days.

I’m having fun, too.

Thanks, son, for giving it to me.

Postscript: Alex, now 32, remains an avid golfer. And he’ll still tee it up with his old man.