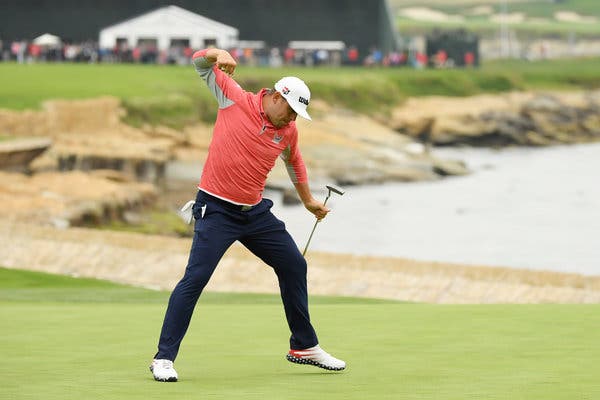 “Go in!” I half whispered to the image of Gary Woodland from my airplane seat, watching the final moments of the U.S. Open on my iPhone screen as our plane began its descent into Reno, Nevada.

And it did — a 30-foot bomb off the face of Woodland’s putter, on the 72nd hole of his record-breaking first major victory.

What a way to prove that, yeah, not only was he not in Kansas anymore — he was on top of the golf world, and deserved to be there.

While I was still lamenting the fact that the USGA did not grace me with a media pass this year — I’ve covered four Opens in the past, including Tiger’s epochal win at Pebble in 2000 and Graeme McDowell’s triumph there in 2010 — I was able to sneak in quite a few moments of TV and mobile device watching over the four days I joined in on my nephew’s high school graduation celebration.

And what I saw, six years after watching a younger, less seasoned but just as intense Gary Woodland win the Barracuda Championship (then the Reno-Tahoe Open) in person, was a man in golfing full at age 35, which, to me, is pretty much the prime age for high-level success on Tour.

I watched a guy control his emotions just as completely and intently as does Brooks Koepka, the back-to-back U.S. Open champ who was his closest pursuer.

I watched a guy who never altered his walking cadence from hole to hole, never rushed a shot, never appeared nervous or non-committal.

I watched a guy who never shied away from a go-for-it-opportunity, most spectacularly on No. 14, that brutal par 5, where he nutted a 5-metal to the rough just left of the green in two, setting him up for a 3-foot birdie putt.

And on No. 17, when a pushed tee shot left him with only one true option — chipping from the putting surface over that hourglass-shaped green’s ridge to the hole 93 feet away, which he nearly holed.

And, yes, on No. 18, where he could have lagged that 30-footer up there and tapped in for par, but instead read the bomb perfectly, stroked the ball with perfect speed and watched it fall dead-center.

Through these defining down-the-stretch shots and many before them, I watched a man serve up so many lessons for our own games.

In all, I watched a man who gave all of us middling golfers something to aspire to, even though we’ll never reach his level and only clutch the U.S. Open hardware in our dreams: to never give up.

And, on this Father’s Day, as a longtime dad, I watched a much younger one grab quite a present to take home to his young son in Florida, and to his wife, seven months along with identical twins.