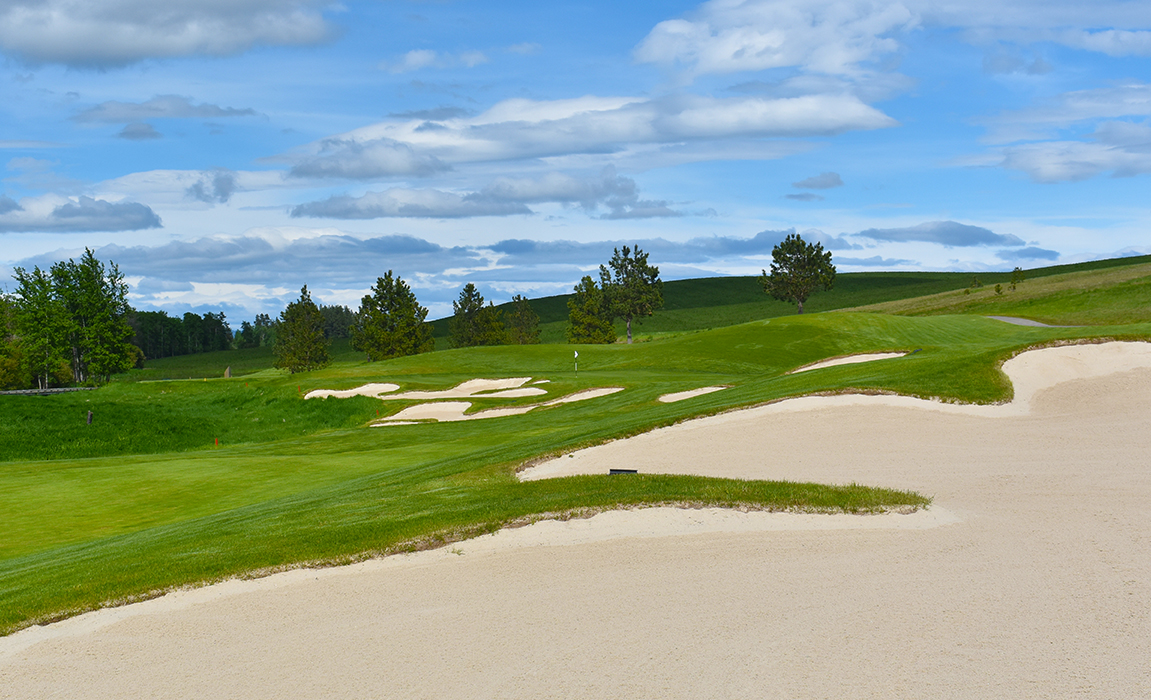 As the tee shots sprayed, the putts lipped out and the double bogeys stacked up after three opening pars — a golf score train wreck — I texted my wife in a fit of pique and frustration.

“Either I need to play more golf or quit.”

I knew the moment I hit send that I’d set myself up with a false choice. The second option is out of the question.

Even as I beat my own brains out on the expansive and handsome fairways and greens of Circling Raven — an outstanding and tough Northern Idaho layout (shown above) owned and operated by the Coeur d’Alene tribe — no way was I throwing in the towel. I was just fishing for at least a mild show of sympathy, and my lovely bride obliged. “Uh oh,” she wrote back.

Then she offered a tip.

“For today maybe pick up and practice a weaker area. Start fresh tomorrow.”

Good advice! But fully “pick up?” No.

So, I replied with a self-tip of my own.

You can guess what happened next.

I relaxed. My posture improved. My grip lightened. I took that extra, crucial few extra moments to consider each shot opportunity on its own merits. The pars, or at least a legit shot at pars or better, returned.

Not that I was keeping score or anything. I’d bailed on that after going 11 over within six holes.

See how insidious numbers are? How they can conspire to wreck the pure enjoyment of the game for its own sake?

So, why not just chuck the card and play as the accomplished sages (I mean teachers) recommend we play — one shot at a time, and count ’em up at the end?

I realize that the numbers we write down on that scorecard are, to most of us, the point of playing golf, but by constantly keeping tally as we go, we often short-circuit our innate, subconscious ability to get out of our own way and simply execute.

The one out there, that is — the fairway, the green, the hole itself — not the accepted “par” printed on the card and in our heads. Hit the real target, and the other one will take care of itself, shot by shot and hole by hole.

Playing fun and rewarding golf depends on that innate target awareness, combined with a repeating pre-shot routine that allows us to step aside, exhale the fear and stifling sense of expectation, and just play.

That’s the theme of a cool instructional series that a Florida-based named Iain Highfield did for us a few years ago. He called the results (score)-based anxiety most of us fight on the golf course “The Chimp,” and came up with a system called OSVEA (Options, Selection, Visualization, Execution and Acceptance) to battle our own ancient brains by taking specific, planned steps to pull off the short-term goal of a good shot, time after time.

I urge you to check it out, along with this great lesson from Brad Brewer on achieving what he calls “R.A.R.E.” success in golf with your inner energy — and many other proven techniques, drills and plans to set your mind on, well, mindlessness — and therefore a purer strain of golf that doesn’t rely on those cold, unforgiving figures on the card for its power and joy.

I’m certainly doing just that, because after nearly 50 years of playing golf, I need to remind myself just how score-addicted I am.

Sure, I could stack up excuses for my poor play at Circling Raven, which threatened to overshadow the joy of being out there with friends in the sun and wind, on an exquisitely routed Gene Bates course that covers an unbelievable 620 acres, surrounded by nothing but tall, waving prairie grass, pine trees and blue-hued hills.

Such as: It was only my fifth round of the year. I was tired. I hadn’t warmed up properly. I was dehydrated. My feet hurt. Whatever.

Those are all valid, but it was my obsession with score, and the cascading feelings of tension and distraction that obsession engenders, that sent my round sideways.

You may say that I’ll never truly push myself to improve until I battle Old Man Par with single-minded fury, but I don’t think that’s the point for the overwhelming majority of us. Yes, we want to break 80 or 90 or 100. All worthy goals that keep us playing in the competitive sense — with ourselves, and with others.

But on the way to realizing those scoring goals, how about we stash the card once in a while, allow the game’s sweet rhythms to carry us through the shots and holes, the challenges and breaks and unsolvable mysteries, and just FEEL it.