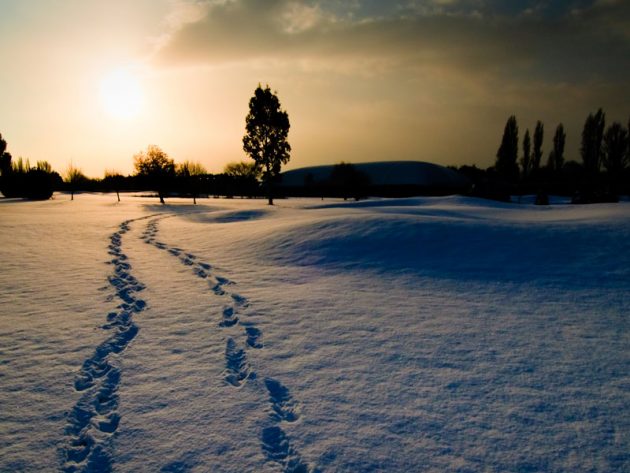 Editor’s Note: As a spate of nasty winter weather threatened to push the finish of the 2019 AT&T Pebble Beach National Pro-Am to Monday — it’s happened before — Golf Tips editor thought of this column, which originally appeared in Fairways + Greens magazine in January 1999. It’s one of his favorites, evoking the charms of golf in winter, and its 20th birthday seemed the perfect time to resurrect it for Golf Tips.

I think of frosty post-holiday mornings in Bishop, California, a town of 10,000 souls anchoring the north end of the Owens Valley, about halfway between Los Angeles and Reno up Highway 395. Most folks know it as the last gas stop on their way to Mammoth Mountain, a famous Sierra outdoor sports mecca, or that burg with the killer bakery (Schat’s, still going strong).

Dad moved us to Bishop from the San Gabriel Valley in 1968 after falling in love with its incredible beauty, its romantic remoteness. I grew up in the Sierra’s most spectacular stretch of 13,000-foot peaks and lived in a postcard every day. The winters are cold but mild — many more sunny days than stormy ones, with the occasional Pacific blast mounting the horses to leap the granite ridges and coat the valley’s sage expanse in a glistening white mantle that burns my retinas still, 47 years after I took hold of a battered Ed Furgol 7-iron and let the game of golf take hold of me forever.

Bishop Country Club was a nine-holer then, a flat, tree-lined and pond-strewn track running along 395 just south of town. A second nine came along in the early 1980s. It’s open year-round, closing just long enough for the snow to melt, no more than a day or two. My first Owens Valley winter, January 1969, brought a six-foot dump that put the links under wraps for a good month or so, but I didn’t yet care. Neither did Dad — he joined the club a year or two later.

He became a fixture there, sneaking in weekend rounds if business at the small motel he and my mom ran wasn’t too brisk — which, in winter, was nearly all the time. He was in his early 50s, a solid 16-handicapper who, through my eyes, greeted each midwinter day with the zest of a younger man. The cold didn’t dent his Minnesota-bred toughness until the last decade of his life.

But back in those days he’d meet his foursome on the first tee and off they’d go into the weak, slanting sunlight with their jerry-rigged swings and $2 Nassaus. You could hear their laughter cracking across the frigid stillness when one of them slipped in a joke or lipped out a putt or yelled, “I press!” If the greenfront pond on No. 5 was frozen over, they’d go right at it, skipping their rock-hard Top-Flites across its surface with just enough loft to clear the opposite bank and roll within putting distance of the pin. Dad was never a long hitter, but his abbreviated swing always rendered a straight shot, and winter’s concrete fairways gave him a few extra yards.

I picked up the game in seventh grade and Dad let me join his group here and there, usually in winter when the course belonged to us and us alone. All skinny elbows and knees with a swing speed ranging from maniacal to supersonic, I was wild with full shots and displayed a temper to match — a malady I fight to this day. Whenever I chucked a putter or attempted to bury a wedge in the unyielding turf he’d scowl and growl, “Knock it off — you’re embarrassing me.”

Not that he wouldn’t answer his own shanks and cold-tops with a “Goddamn it!” or “you dumb shit!” and bounce the clubhead off the ground with a disgusted wrist flick, but he was entitled. He’d played the game off and on for going on 20 years — taking it up in his 30s and playing at Griffith Park with his railroad buddies — and he’d earned the right to toss up a flare of disgust, especially with a few bucks on the line.

Despite my outbursts and lapses of confidence, Dad didn’t intervene in my growing golf addiction. Hell, no. Matter of fact, he helped push in the needle. Next to trawling for trout together up at Lake Sabrina in the summer, this was heady father-son stuff, a game-given blood bond we’d share no matter what the season.

In high school, I went out for the Bishop High golf team as a freshman. Dad couldn’t hide his pride or keep his distance from the team. He’d join us on springtime road trips to a quirky military track in Hawthorne, Nevada, a layout stark and windswept enough to beat every ounce of energy out of the most amped-up, smartass teen.

As a WWII Merchant Marine vet whose ship was torpedoed off the coast of North Carolina and a blue-collar switchman who lost half his left foot in a 1968 railroad mishap, Dad loved watching us getting our butts whipped by a simple game. And who always grabbed the crown as king jokester during those desert jaunts to and from some Godforsaken muni?

He was one of the guys, to the end. When a buddy nicknamed me “Hack,” Dad picked it up and ran with it. That was my name for the next 20 years.

Dad got me a job shagging balls and mopping floors at the golf course. We enjoyed many a bracing winter round in those days; after an afternoon nine (which I, as an employee, played for free), our hands and faces throbbed and tingled. I clearly remember playing the last few holes in freezing rain or a hushed canopy of snow. We’d head into the clubhouse for a burger and a warm-up drink: cocoa for me, Early Times for him. Years later, on beer-break from Chico State University, I’d hunker down in the 19th Hole with him and his still-intact foursome, down a few cold ones, watch football and swap jibes. I was in on the ritual. I’d arrived, completing a confirmed hacker’s coming-of-age circuit with my father at my side, often in winter’s wan light.

In January 1998, Dad left the sparse winter fairways of mortal life for the unimaginably lush layouts of the hereafter. A day after playing 18 holes on the course he knew so well, in the dead of winter — to the amazement of buddies who hadn’t seen him on the links in a while — he had a stroke while hauling his sticks out of his car. Dad was flown to a hospital in Reno, where I’ve lived since 1984. He gave me just enough time to round up my brothers and sisters, dying four days later, hours after we all watched the Broncos-Packers Super Bowl — the final gasp of yet another passion we shared, for football and the myriad betting angles that go with it. (For the record, he had a wager on the Pack that day. They, and he, lost.)

So came the final putt-out in our lifetime father-son round. No longer would I visit Dad in Bishop and coax him out for a few holes or a couple hours trawling Sabrina, where I spread his ashes six months after he died. But I carry him and his booming laugh with me every time I venture into the Northern Nevada cold for a few swings among the barren elms and cottonwoods.

I like to think that whatever road Dad took, wherever he is, there are no tee times (just float up and whack it), never a 3-par wait or a bad bounce, and that the weather is always pure — though knowing him, he might lobby the head professional for a blustery winter day now and again, just for old time’s sake.