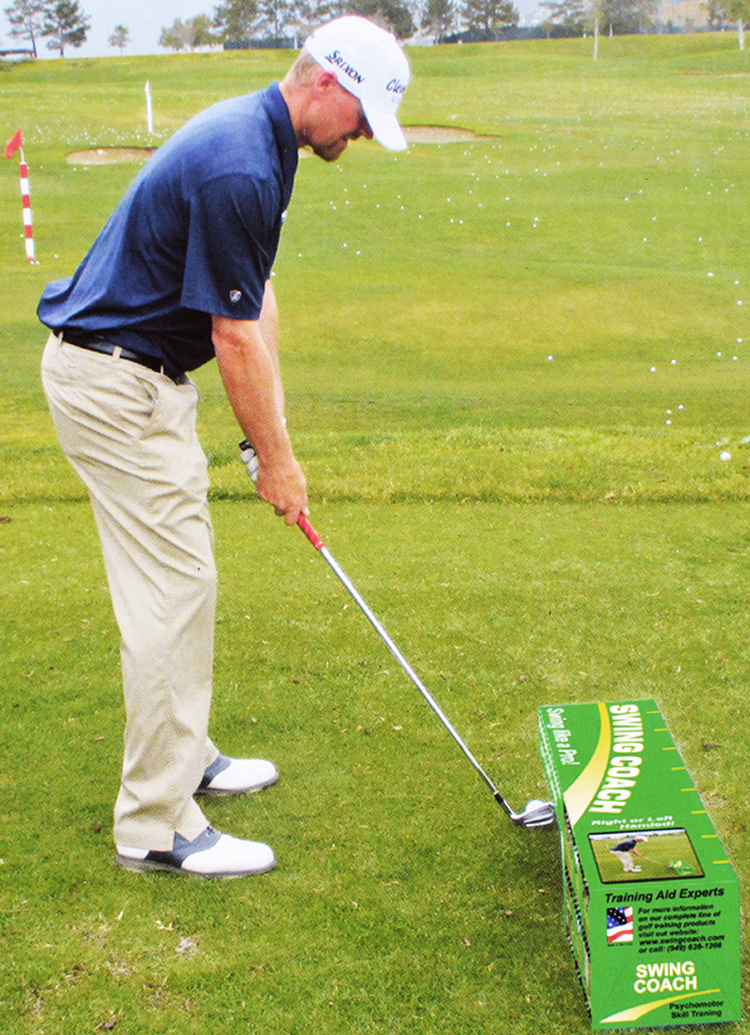 Behold the box. It’s not much smaller than the oblong carton in which you might ship your sticks somewhere. It’s covered in photos, big type and a slew of photo-tips that show in a glance what it’s really for. And it’s missing one corner of cardboard, close to an eighth of its total volume overall — a specially designed notch to help you groove your swing when placed in certain positions. You can turn it on its end, stack it, lean against it, chip with it, putt with it and, of course, practice every position of the proper full iron swing with it.

Did we mention The Swing Coach is just a cardboard box? No electronics or fancy attachments in sight? No GPS or built-in video or other such digital doodads?

That’s right. A box. It takes a few seconds to put together, and then it just sits there. Except when it doesn’t — when you’re moving it around to accommodate the seven full-swing drills and couple shortgame drills that it’s designed to facilitate, each of which is explained in great detail with the included full-color manual. In fact, it happens to be one of the most versatile training aids we’ve seen in a while, and as with Girl Scout cookies or potato chips, you probably can’t stop at just one.

The Swing Coach puts the basics of golf’s crucial psychomotor skills into three dimensions without the need for fancy technology, and it can be used indoors or out, on grass or with a mat (as we employed for our own tests), and with most of the clubs in the bag, especially irons. It’s not designed to use with fairway metals or a driver simply because those longer sticks bring different planes and swing widths into play.

In all, the Swing Coach works best in dialing in the elements that build a repeatable, powerful, balanced iron swing, with a couple interesting detours into chipping and putting. For our tests we concentrated on the irons, moving through each of a half-dozen-plus drills that break the swing down into easy-to-digest pieces. Drill 1 deals with the one-piece takeaway by training you to keep the clubhead low, slow and down the line when initiating the swing with the shoulders. Drill 2 concentrates on Position “A,” that all-important halfway-back spot where the hands have stayed low, the clubhead points straight up and the hips and legs haven’t yet moved from the address position. Then you move into Drill 3, which involves two Swing Coaches stacked end-to-end and behind you; employ too flat of a backswing and you’ll knock over the top box every time. This portion of the program was a problem for our tester, who has worked for years to flatten his move into something closer to Matt Kuchar or Jason Dufner than, say, classic upand- downers like Adam Scott. So, there our outliers, but with some repetition our guy was avoiding the box by bending over more at the hips and keeping the club “in front” of him — which is, of course, the goal. Score one for Swing Coach. 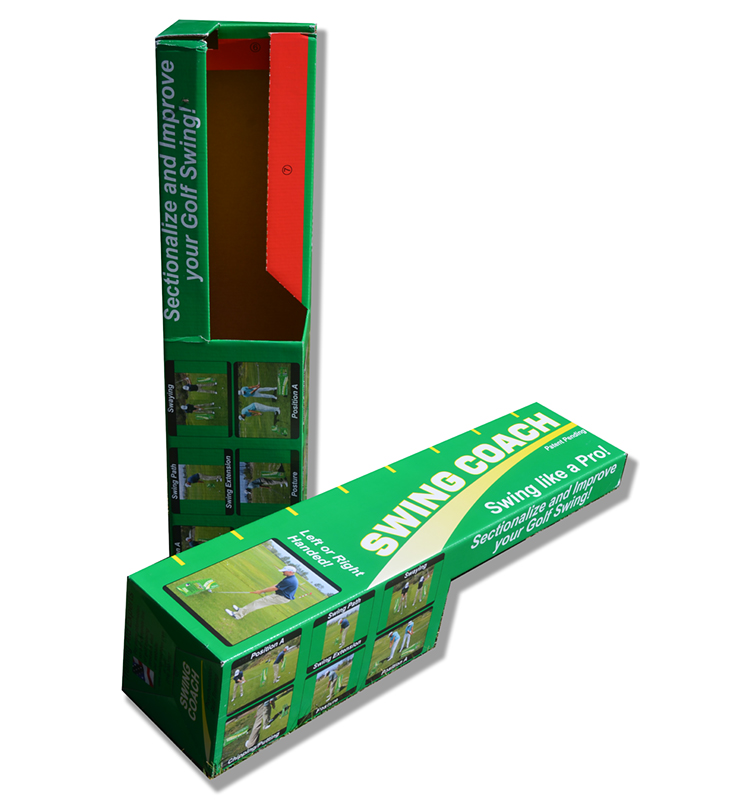 Drill 4 moves naturally into the forward swing; as in Drill 1, you position the Swing Coach parallel to the target line, with its “notched” end facing the target and set about halfway back in your stance. The idea is to swing down from in to out and, again, avoid banging the box. (If you still have a bit of a natural out-to-in move you can position the box slightly askew.) Drill 5 helps eliminate the dreaded “chicken wing” follow through as you place the box about a foot outside your left foot, down the line and a few inches in front of your toes; you must extend to avoid denting the Coach on the follow-through. For Drill 6, the box moves back behind you, weighted down by a few golf balls; back into it, take your address position and swing in full and see if your backside stays put. If not, you’ve probably lost your spine angle and lifted up, leading to thin or toe strikes. For the final full swing drill, you place a Swing Coach on either side of your feet and hips at address, then make your best move — which hopefully doesn’t include a sway, or, again, one of those boxes will bite the dust.

The putting drill involves finding a flat putt of at least 12 feet, extending a string back from the hole and making marks on which to line up the Swing Coach, plus three perpendicular lines — one behind your stance, two in front — to help you groove the proper, rhythmic short-backswing/extended follow-through feel. The simple chipping drill involves placing the Swing Coach parallel to your target line and hitting balls along its long edge with the goal of keeping the clubface square to that line for as long as possible while employing the “big three” keys to good chipping: Slightly open stance, ball opposite right instep or toe (for righties) and 90 percent of weight on left heel.

So, couldn’t you just rustle up a UPS carton and come up with your own Swing Coach? Perhaps, but this product’s designers have come up with the perfect dimensions, alignment marks and corresponding lessons to make this simple friend as useful and loyal as possible.

Yeah, in the end it’s just a box, but use Swing Coach regularly and, ironically, you’ll get out of the box of bad habits. You’ll be free.