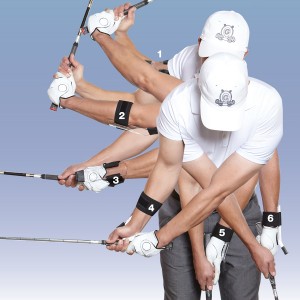 Bill Curry had had enough. Three decades of marginal golf had seeped into his soul and threatened his love for the game, so he got a lesson and discovered the biggest bugaboo in his swing: A bent left arm going back, which robbed him of power and caused a decided out-to-in motion. Simple, right? And common, too. But discovery and maintenance are two different things. Curry couldn’t cure that swing fault on his own so he set out to design a training aid that would keep his arm straight and knock strokes off his card. Three years later he had the Golfstr — a small, curved, clear plastic device with one end bent at a roughly 30 degree angle. By strapping it to his upper forearm with the bent end pushing against his lower bicep, he got immediate feedback when the arm broke down. The improvement was immediate and gratifying. But that’s not the end of the story. Once Curry put Golfstr into production and showed it to a few teaching pros, they almost immediately came up with five more swing-straightening functions, simply by switching arms, changing positions on either arm and altering the direction of the bent end inward or outward. For instance, by moving Golfstr to the trailing bicep and placing the end just below the elbow, you’ll achieve a perfect 90-degree “lag” angle going back. Move it further down the same arm and the bent end will prevent too much wrist break during full shot and chip shot takeaway, while the same set-up on the leading arm (with the end bent outward instead of inward) will prevent that nasty “flip” in the chip or pitch follow-through — with the same stable-wrist effect for putting practice, too. Our favorite is the 90-degree lag set-up, but testing found us strike the ball with more accuracy and consistency through the bag. And we love the fact that it’ll fit in a trouser pocket, and that it comes with a removable and versatile rubber tip that helps solidify contact between gadget and arm or wrist. Now Golfstr has attracted the notice of some big-name teachers, and rightly so. It’s a winner. 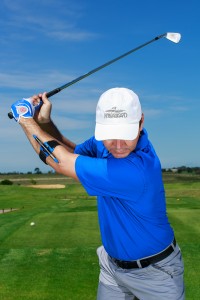 We first caught sight (and sound) of this nifty, simple gadget at the 2016 PGA Merchandise Show in Orlando, and have since had a chance to check it out during practice sessions, both during rehearsal swings and while actually hitting balls on the range — in fact, there’s nothing holding you back from using it during a casual round. The premise is simple and the feedback immediate: You just strap the ballpoint pen-sized SwingClick to your lead forearm, being careful to line up the device with the center-back of your hand (between the middle and third finger), begin taking normal-sized swings, and the auditory cues and clues start coming. It makes a clicking sound at the three main junctures of a swing — at the top, at impact and at follow-through — that is, if your rhythm is as smooth as you’d like it to be. With some intent practice, you’ll find yourself slowing down your takeaway, taking that all-important mini-pause just before beginning the downswing, and letting the club pull your arms and torso through to the target. If you’re jerky or quick at any point, you won’t hear the vital click. The upshot of this immediate feedback? Muscle memory, a much better transition and better overall rhythm. The Swing Click Plus works with any club but particularly well with irons since the angle of attack is a bit steeper. And the new Plus’s sleeker design and more adjustable strap makes it truly one-size-fits-all. It now comes in four colors, too, and slides easily into your bag so you can keep that newly ingrained tempo going as needed when on the links As carry-along training aids go, this one is a winner. 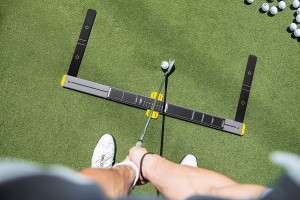 It’s one thing to get the PGA Tour’s longest driver (no, not Dustin Johnson) to endorse your products, but it’s another when the products he endorses are so clearly and, again, simply, effective: Hence we have Tony Finau, that young, big, friendly, nearly-silent murder of the golf ball, doing video spots for SKLZ golf’s lineup of golf-specific products, including the Set-Up Trainer — the type of item you’ve always told yourself would come in handy when you’re working out some issues on the practice tee, but couldn’t quite conjure a mental picture of what that item is. So we’ve got the picture: a four-foot-long slab of plastic equipped with a sliding top piece marked with lines delineating every club in the bag, driver through wedge, against which you line up a shorter perpendicular, stationary alignment piece to match the club you’ve grabbed. You then place a ball opposite the center line on the stationary piece. A second set of lines alone your toe line show where to place your feet — wider for woods, narrower for irons, narrower still for wedges. Together those lines instantly put you in perfect ball-striking position for each club. Then you can start hitting balls and adjusting as necessary depending on your personal swing plane and physique, but there’s no guesswork as to the proper starting point. But wait, there’s more: Fold-out bars on either end of the main bar can be placed perpendicular to keep you square, and of course, the whole thing can be adjusted “open” or “closed” to help facilitate a draw or fade relative to the clubface. The Set-Up Trainer works for righties and lefties, and it comes with a nylon storage bag that’ll slide right in with your sticks. By the way, LPGA star Anna Nordqvist is a big fan, too.
$59.99 | www.sklz.com 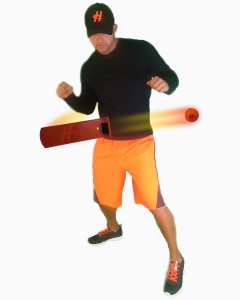 Is there a more coveted move in the effective golf swing than that instant when the trailing hip fires out toward the ball as the club approaches impact? We doubt it, which is what makes the Hip Striker such a no-brainer for golfers, and all athletes for that matter who want to get those power-packed big muscles in the hips and glutes rotating and into the ballgame big time — soccer, baseball, tennis, you name it. Consisting of a flat, orange plastic paddle-like object and an adjustable strap that attaches around the waist, the well-placed Striker should protrude from the hip at least a 45 degrees from the toeline at address; from there you toss one of three included foam balls — they’re about the size of a baseball — up and in front of you, and try to smack it with the paddle as it’s coming down. That takes rotational speed and coordination, the key combo to blasting the golf ball — not brute strength. As you improve you can move the paddle back to require faster hip firing to hit the ball. It’ll take some practice to start whacking the balls without missing, you might look a little funny doing it and you’ll get more of a workout than you might expect, but who cares when the result is a more synced-up swing, more solid strikes and more yardage down the fairway?