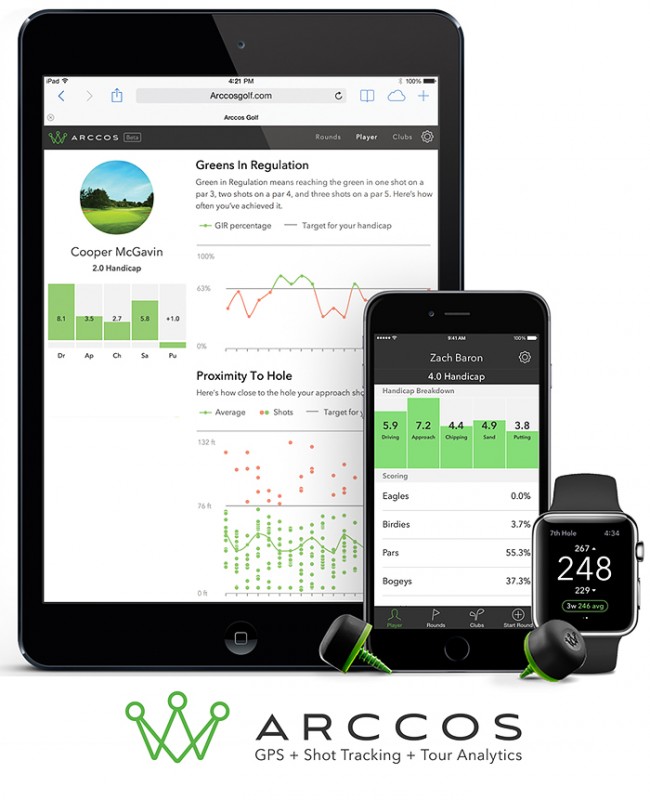 When it arrived on the scene in 2014, the Arccos system was unlike anything in consumer golf technology, giving every club in the bag an active and vital voice in the instant-feedback process thanks to 14 sensors that attach to the grip end of a club, including the putter, and pair via Bluetooth with the company’s free iPhone app. PGA Tour star Billy Horschel quickly jumped on board to sing its praises, and he’s not alone. Just one round with Arccos, at the Journey at Pechanga in Southern California — one of more than 20,000 U.S. courses in the app’s GPS-mapped arsenal — had us walking away in wonder.

The round actually began a couple weeks earlier, minutes after opening the box. We were presented with a handsome array of sensors that come alive during the initial registration, login and installation process on the ARCCOs app and Web site. Each sensor gets its own digital identity that matches it with the club at hand, and the app doesn’t forget, even after days on the sidelines, in the trunk of a car or stashed in the garage; the setup and follow-up are amazingly seamless and straightforward.
Once we got to Pechanga Resort, opened the app and hit the first tee, Arccos kicked into quick and focused gear, finding the course’s GPS coordinates in a few seconds, and posed the age-old invitation via a button at the bottom of the iPhone’s screen: “Start a Round.” So we did, and that’s when Arccos really shows its stuff in real time. Shot to shot and hole by hole, the system maps, measures and records every shot taken, automatically capturing critical data on club distances, putts per round, greens hit in regulation, driving accuracy and more to help players identify patterns and refine strategy. Pull a stick (holding it by the recommended “head up” so the Bluetooth can pick it up, and keeping your phone on your person — a hip pocket, for instance), and you’ll get the message, “8-iron detected.” After you’ve hit the shot, put the club away and found your ball, Arccos will give the exact distance the ball traveled, and how much is left to the center of the green and various other course landmarks. So it’s a sweet rangefinder, too.

But it’s in the accurate racking up of shot values and averages where Arccos really shines. Our tester has a tendency to hit fairways with his driver but spray iron shots and leave putts short, and on those fronts and several others, he got the feedback he needs to dial in practice points and, hopefully, shave some shots the next time out. And the more complete rounds played with Arccos, the richer the data gets — again, easily accessed via the “Player” button. It logs scoring — eagles, birdies, pars, bogeys and doubles+ — plus average distances and personal best with each club (such as longest drive), fairways hit and the quadrants thereof (left or right), greens in regulation, approaches missed and in what direction or distance (left, long, right, short), average distance to pin, chips and up-and-downs, and putts per hole. It’ll even offer club recommendations based on your track record. For numbers junkies it’s pure heaven, but for even the average weekender with a general idea that he or she wants to get better and take a few more bucks off his buddies, it’s a data-driven godsend, right there in living color.

If you happen to be rocking an Apple Watch, the free Arccos app is among the first golf-specific offerings available for that gadget. Our review had just one issue: Follow specific stat-building and keep tabs on his performance during the round — a possible card-wrecking distraction for some — or wait until the 19th hole to review them over a beer. It all depends on what gets you in the zone you’re looking for out there on the links — numbers compiled and revealed instantly as if by magic, or the simple and satisfying knowledge that they’re there for you down the road, when you need them.