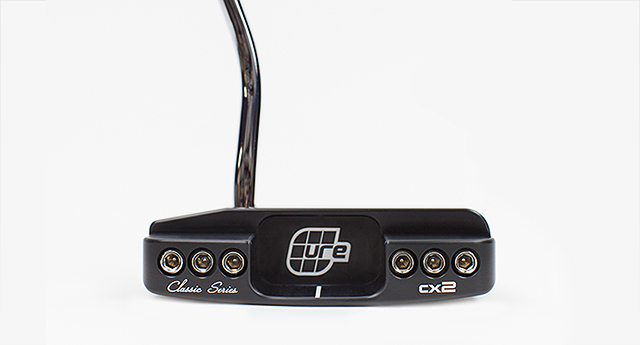 Taking the Cure: There’s always room in the bag for another putter, but sometimes you pick up a new model, take a few practice strokes then get down to business on the nearest green, and it’s love at first sink. That’s what happened to the GolfTips review crew when they gave Florida-based Cure Putters’ CX2 Classic Series wand a spin (there’s a CX1 model, too, with a square trailing edge; the CX2’s is rounded). New for 2016 and a companion piece to the company’s RX1 and 2, which have a more unusual “pontoon” design, this is really a traditional perimeter-weighted blade-style putter on steroids – as in a 5-inch-long, 1 __-inch-deep face. That’s a good half-inch longer and quarter-inch deeper than most modern blades, which, according to Cure founder and retired architect Steve Davis, allows a much larger sweet spot and a truer roll no matter where ball meets face. That, combined with an extremely high moment of inertia (MOI) which prevents twisting at impact, leads to a very stable feel and incredible forgiveness for much greater accuracy and distance control, even on extreme mishits.

Adjustable Weights: Through a series of strokes from distances ranging from five to 25 feet, the CX2 produced a pleasant, soft-but-solid feel and an ever-so-slight “tap” sound. Its deep face and low loft rendered it nearly impossible to hit anything but the equator of the ball, which, in turn produced one true, end-over-end roll after another. We also toyed with its adjustable weighting system – six small removable screws, three on each side of the rear cavity – which allows a far greater range of weight, from 334 grams to 376 grams, than any other putter on the market. Cure ships each stick with every screw installed, and you adjust by removing from the “inside-out” to maintain heel-toe balance and the proper MOI. If you sport a shorter stroke, you’ll probably prefer it on the lighter side; longer strokes will go the heavy route, though that’s a relative term; the putter’s all-aluminum body is strong and sturdy, but light, and its precision-milled face is as “soft” as they come, with no insert to deal with.

Then there’s the CX2’s proprietary “Triangulation Alignment,” invented by none other than former PGA Tour player and head honcho Deane Beman – who loved Davis’s prototypes so much he invested in Cure – helps you line up your putt like an arrow for deadly accuracy.

Summary: We’ll leave the final word to the company’s literature, which, after our testing, nails it: “Innovative design takes several problematic variables out of the equation and offers incredible forgiveness and control, resulting in a tighter shot dispersion. Golfers of every skill level will putt more consistently, build confidence and achieve better results with a Cure RX Series putter.”