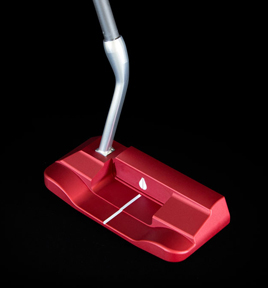 It was quite the coming out part for the new Bloodline R1-J Blade putter: the U.S. Open at Erin Hills this past week, where one player put the distinctive red want into his bag. It’s been that kind of year for the upstart company: though the Bloodline brand only launched earlier this year, both their putter models have now been played on the PGA Tour by players who have multiple major championship wins.

The game-changing R1-J Blade allows a player to clearly see where the putter is aligned because they can walk behind it while it stands alone on the green. From behind the face, it’s possible to see the club, ball, target line, and hole without having to tilt your head or use your peripheral vision. Bloodline’s putter technology conforms to the Rules of Golf.

“We’ve been working on the R1-J Blade since we started the company,” said Bloodline Co-Founder Brad Adams. “After the successful release of the RG-1 mallet, we’ve received feedback from tour players and have made refinements to the blade that can meet the many demands of tour players. We are pleased to offer premium putters that golfers of all skill levels are excited to put into play.”

“Our goal was to design a putter that tour players would choose to play regardless of whether it stands up on its own or not,” added Adams. “The R1-J Blade is surprising in how stable and solid it feels at impact as well as how well it stands on its own despite a relatively compact footprint.”

In designing its putters, Bloodline removed as much weight as possible from the shaft and grip. According to Bloodline Co-Founder, Larry Bischmann, “Designing a putter shaft that is unlike anything that’s been played before makes an important difference. We created an ultralight shaft that does not compromise on performance and incorporates an oversized gripping section.” 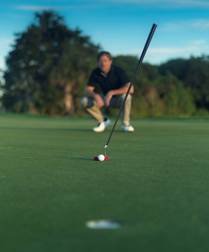 This pioneering construction enables Bloodline putters to have an extremely low balance point that helps give more feel and release during the stroke. The Bloodline R1-J Blade putter construction features a CNC milled aluminum face, body, and hosel that are bonded to a stainless steel sole plate. Additionally, a unique sole design was developed to help the putter stand-alone without interfering with the ground during the swing.

Bloodline draws on a rich tradition of golf industry success to bring a breakthrough technology to the premium putter market. Brad Adams has been in the golf industry for 30 years. In 1991 he became Senior VP at Odyssey Golf and was a key member of the team that built the brand that continues to dominate the putter category. Brad is credited with developing and co-authoring the Odyssey polymer insert patent. During his tenure managing the PGA, SPGA, LPGA and EPGA tours, Odyssey saw hundreds of players use the product and win over 100 events. Brad also was a founder of Never Compromise, which had more victories on the major golf tours in its first year than any other putter company.

Larry Bischmann has over 15 years of experience in the golf industry. Larry received his engineering degree from the University of Illinois in Champaign, IL. In 2000, he was the Tour Engineer and part of TaylorMade adidas Golf’s Global Sports Marketing team that re-claimed the #1 driver count on the PGA TOUR. Starting in 2003, Larry built the team and strategy that launched the super-premium driver shaft named Diamana, which became the winningest driver shaft on the PGA Tour.

The Bloodline name pays tribute to the legacy of success in golf that started with, Vale Adams, an extremely well-respected club professional from McHenry, Illinois. Vale’s son, Gary Adams, is responsible for founding Taylor Made Golf which created and dominated the metalwood industry. Finally, Gary’s son, Bradley Vale Adams, is an accomplished player and was one of the founding members of Odyssey Golf at the age of 25.

The new Bloodline RJ-1 putter is currently only available for purchase at www.bloodline.golf. As more product becomes available, Bloodline will have demos and/or stock at select retail locations in the USA and in international markets.