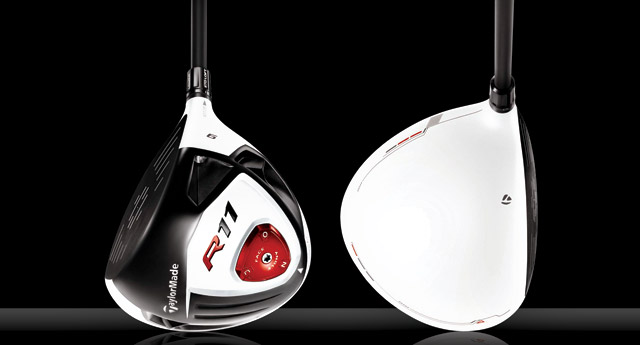 By now you’ve probably noticed that white is the new “it” color in golf. Ironically, it’s not as though white hasn’t been around a while already, with our white tees, white golf balls, white golf shoes, white belts and so forth. But it wasn’t until recently that white equipment crept its way into our golf bags, thanks mostly to the Corza Ghost series putters that have an all-white paint finish that instantly made it recognizable on the PGA Tour.

TaylorMade’s R11 has just arrived, this time with a white crown and a jet-black clubface for what’s clearly one of the most striking aesthetics we’ve ever seen in a driver. And while there’s much more technology to the R11 than just the paint job, the white color is actually fairly easy on the eyes, thanks to a muted, satin finish that seems to absorb more light than it reflects, thus reducing unwanted glare. We talked with Tom Olsavsky, Director of Product Creation for Metalwoods at TaylorMade about why they choose white and what it means for the future of TaylorMade equipment.

Golf Tips: Why white? Is there something about white that you’ve found appealing to the eye, such as the Ghost series putters? Did you experiment with other colors, too?

Tom Olsavsky: White was chosen because it provides the optimum contrast with a black face. We experimented with other colors and other variations of white, and found that white has great contrast with green, which aids in alignment. Furthermore, white creates what looks like a larger address size, approximately 2% larger, which adds to confidence for golfers. And lastly, it’s easily seen on TV, which was quite apparent from watching the players on Tour use it during the broadcasts so far this year.

Golf Tips: Why is it so important for the clubface to be black?

Olsavsky: The black sole and face finishes were seen as more exciting from a shelf-appeal standpoint. In the past, we had complaints that a black face with black crown isn’t very good for alignment. The black on white however is exceptionally easy to align.

Golf Tips: Isn’t white distracting? Is there anything the clubhead paint has with it to minimize glare?

Olsavsky: We tested white extensively to develop the final version, which has a flat, clear coat to reduce hot spots from the sun. Initial feedback from Tour players was immediate and positive about the reduction of this hot spot. The “white” color is a unique combination to produce this effect and isn’t the same as that used on our Ghost putters.

Golf Tips: Do you suspect other companies to follow your lead with not only white, but maybe other colors, as well?

Olsavsky: We know that white isn’t totally new; in fact, we made a white driver with a black face in 2008, but that was on a CGB Max ladies product. This execution is new because of the change to a flat-white color and some other things that we did with the R11/Burner 2.0, to optimize this version for optimum playability.

There’s another company with a new white driver. There are some rumors that they did it just because we were doing it, but their execution doesn’t have all the benefits of ours. So yes, we expect some copying in our industry, now that our product is out in the open.

We expect this combination of a flat-white crown with a black face to be around for a while because it has a better performance appearance and isn’t just a fad. Our industry has seen several cosmetics in wood/metalwood heads over the last 40-plus years, from actual wood, to black with wood face, to silver metalwoods, to colors (mostly black or gray) with silver/black faces.