At first we struggled to upload courses onto the Swami by Izzo Golf because we’re on a Mac, and the Swami is only PC compatible. (It doesn’t work on a Mac’s Parallels Desktop. Luckily we found an old PC, thanks to our tech guy.)

Don’t expect a lot of bells and whistles from the Swami. Its simple, black-and-white screen only gives front, center and back yardages (it doesn’t measure your shots, and there’s no hole map), but the yardages were on the money. A big plus is its rechargeable Li-Ion battery that lasts 12 hours. You can’t turn on the Swami until you’re at the golf course, which is a great way to preserve its battery life.

It’s lightweight, basic, holds 10 courses at a time and has a database of 12,000 courses. Plus it’s easy to attach to your belt, and being light and unobtrusive is a real bonus when you want to access yardages immediately. Its plastic casing and limited capabilities beg the question: Will it come down in price? Cost: $150 | More Info: izzo.com 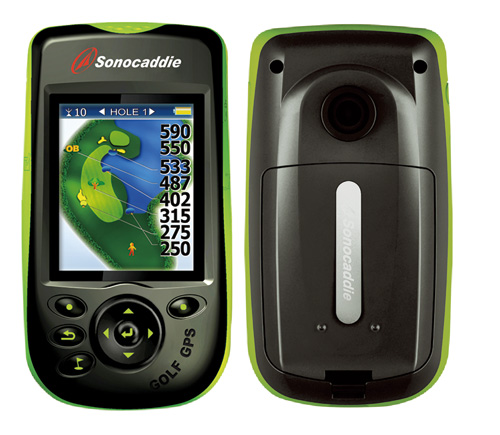 SONOCADDIE V300
The sturdy, waterproof-screen Sonocaddie V300 shows an overhead view of the hole with yardages listed down the right-hand side of the screen with lines pointing to the front edge of each hazard. This simple display made it easy to know exactly how far away we were from trouble.

A close-up view of the green made it a breeze to see our exact distance from the front, middle and back of the green.

We found it a bit too big to put in our pocket, but it fit nicely into our cart’s cup holder. Stores up to 30 courses. Its rechargeable battery lasts for 15 hours. PC only. Cost: $399 | More Info: sonocaddie.com

GARMIN GOLFLOGIX GPS-8
The sturdy and straightforward Garmin GolfLogix GPS-8 features a black-and-white screen and, while it doesn’t have most of the extras found on some other models we tested, it excels in the most important area: measurement. As GolfLogix CEO, Scott Lambrecht puts it, “Traditional golfers want to play golf, not a video game.”

After testing models that did everything but hit your shot for you, it was refreshing to use a unit that delivered the information we really needed: distance to the green (front, center and back) and yardage to hazards (it recognizes a maximum of six per hole). Another key feature we liked but didn’t find on other units was lay-up distances to the 150-, 125- and 100-yard signs.

The GPS-8 subscription costs $29.95 a year for unlimited courses, or you can load (and rotate out) one course for free. Holds 20 courses. PC and Mac compatible. Features Garmin mapping technology. Cost: $299 | More Info: golflogix.com

SKYCADDIE SG5
Simple, easy to use and accurate. These were our first impressions of the SkyCaddie SG5.

Its color interface was easy to read and simple to navigate. The display didn’t have any annoying glare, so we didn’t have to hold it at awkward angles to check the yardage. All we did was choose one of the pin placements (front, middle or back) on the left side of the screen, and SkyCaddie did the rest of the work for us. After we finished a hole, SkyCaddie’s scorecard instantly came up so we could keep score. The SG5 attaches to a sturdy belt clip and is small enough to be operated by one hand. Its battery life is strong and can handle several rounds on a single charge.

Although we didn’t take advantage of this function, we thought it was pretty cool that you can sync your SG5 to your computer where the desktop application saves your round. Holds up to 20 courses. PC and Mac compatible. Comes with an AC battery charger, car charger and carrying case. Cost: $399 | More Info: skygolf.com

CALLAWAY UPRO
The small, thin and lightweight (but very powerful) uPro from Callaway is, like the Swami, SkyCaddie and Bushnell units, light enough to clip to your belt or carry in your pocket (which is what we did when we played with it). It features a color screen that switches between “green” mode where yardages are measured to the front, middle and back, and “hazard” mode where bunkers and bodies of water are listed, top to bottom, on their corresponding side with yardages measured to the front and back of them. It took us awhile to get used to this mode, but eventually it worked like a charm.

We liked that it prompted us when we walked to the next tee with a “Do you want to play (the next hole)?” because sometimes our golf ball doesn’t travel in a straight line, and we might unintentionally be on that hole.

We tested it in high altitude so we were glad to have the “mark” button to measure our longer drives. The battery started to drain toward the end of our round, even though we charged it pretty well. Not sure if this was a user error or the unit (the Callaway website says the uPro’s battery life is 10-12 hours). Whatever the case, it was surprising given that when the unit is not in use, the screen goes to sleep.

The uPro’s coolest feature is its “pro” button on the side, which shows you an actual flyover of the hole (for an extra fee). Cost: $399 | More Info: uprogps.com