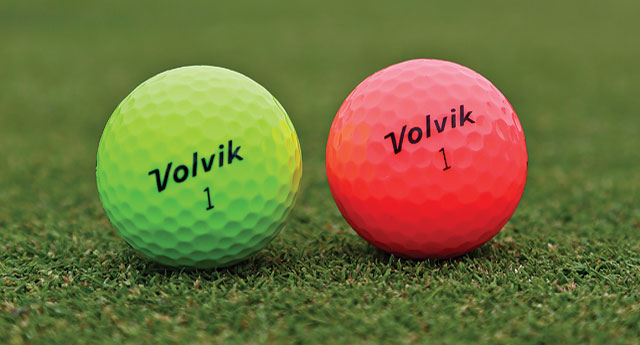 One of the best perks that comes from being an equipment editor is having the chance to test and try different pieces of equipment. Among the most fun things to try are golf balls, mainly because it means I can use my regular golf equipment. (I know, hardly a problem to complain about.) That said, I was excited to try two new golf balls from Volvik: the Crystal and the Vista iV.

VOLVIK CRYSTAL
Tech Talk: The Volvik Crystal is a 3-piece, Surlyn with Zirconium compound-covered golf ball, designed to favor golfers with moderate to slower swing speeds who want the ideal blend of distance, a soft feel and higher than average spin rates. The ball comes in a variety of semitransparent, high-visibility colors (pink, orange, yellow and green), each of which stands out in the air and on land (yes, even the green is easy to spot). My favorite actually was the pink, which for whatever reason, was easy on the eyes.

Feel: To be fair, remember that this isn’t an apples-to-apples comparison, rather it’s a firsthand account of how these balls felt during my trial. That said, the Crystal actually felt pretty soft off the tee with longer clubs, thanks to the ball’s 80-compression rating. On shorter shots, the ball felt a little firmer, and when putting, the ball felt the firmest. I happen to like that, since when putting, firmer golf balls help me feel my putts a little more. They’re not the softest balls I’ve tried with a driver, and not the firmest with short irons and the putter. They’re somewhere in the middle of the pack among the balls I’ve tried this year.

Performance: Because I happen to swing a little harder than the golfers this ball caters to, I tended to hit shots a little more on the higher side. This was especially true with the driver, as I hit a few shots that spin more than I desired. But get this: The distance that I got with these balls, even on the higher, spinning drives, was flat-out awesome. Quite
surprising, actually. With shots from the fairway, I actually was able to control my ballflight pretty decently with a moderate amount of spin. With chipping and short pitches, I probably would have preferred a little more softness in the cover to add some extra bite. But for the golfer who seeks big distance with a soft feel, this golf ball is a top contender. There’s nothing better than outdriving your mates with a pink ball. I did just that, and it was a blast.

Conclusion: The Volvik Crystal is a great ball that, I forgot to mention, is ridiculously durable, as well. Its vivid colors make it fun to play with, and the length off the tee, in my opinion, is comparable to other soft-core, distance-minded, 3-piece golf balls on the market today. For me, I swing a little too hard to get the most out of the Crystal, and I probably would have wanted more spin with shorter shots, but for golfers who want serious distance with a soft feel and moderate spin, you can’t go wrong here.

VOLVIK VISTA iV
Tech Talk: The Vista iV is a 4-piece golf ball that has a Urethane elastomer with Zirconium Z-I compound cover designed for both power off the tee and added playability with short shots. Like the Crystal, it comes in four colors, only this time without the translucent sheen. It has a higher dimple count (392) than the Vista that, according to Volvik, lends a mid-high trajectory.

Feel: The Vista iV isn’t your ordinary high-performance golf ball. Aside from the obvious dose of color (which I’m not ashamed to say I love), the Vista iV is probably one of the best balls you’ve yet to try. (By the way, that’s not a true statement, relative to colored spheres; it’s one of the most popular colored golf balls worldwide.) With a 95-compression rating, the Vista has a firmer feel than the Crystal with a driver, and from the fairway and when putting, the ball feels a tinge softer than the Crystal. If you were to compare the Vista iV to other premium Urethane-covered balls, then, yes, it has a firm feel. That said, don’t get me wrong. It’s still a soft-feeling ball! It’s just not as soft as some of the other 4-piece multilayer balls I’ve tried.

Performance: Could the Vista iV be one of the biggest surprise hits of 2013? I think so. Not only was I surprised by how much the ball spun (with short irons and around the green), but the ball also provided some staunch distance off the tee. I hit the ball a little higher than the mid-high trajectory the ball promises. That might not help me in the wind, but on the day I tested the ball, I hit the Vista iV farther than I did the Crystal, which makes sense since I have a faster-than-average swing speed and the ball has a higher compression. The real surprising stuff was in the shorter shots, though. Despite the balls harder feel, it still packed plenty of bite when I needed it most as I hit a few shots that spun
like crazy! Like the Crystal, I barely made a scratch on this ball after 18 holes.
(Yes, I made it through the round without losing one.) It’s also more durable than any Tour-level ball I’ve tried this year. Easily.

Conclusion: The Vista iV is a breath of fresh air in a market that commands $40+ a dozen. The Vista iV is actually a pretty solid performer with big distance and loads of spin. What more could you want? For me, I’d probably prefer a lower launch with the driver, but even with the higher ballflight, I found the fairway as often as my swing allowed. As to the firmer feel, I like that. It’s up to you to decide if it’s right for you. Same thing about the color. Some stubborn traditionalists prefer white, but trust me, they’re missing out. The Vista iV is probably the most fun I’ve had with a 4-piece golf ball all year. It’s totally worth checking out.

2 thoughts on “We Tried It: Volvik Crystal & Vista iV”