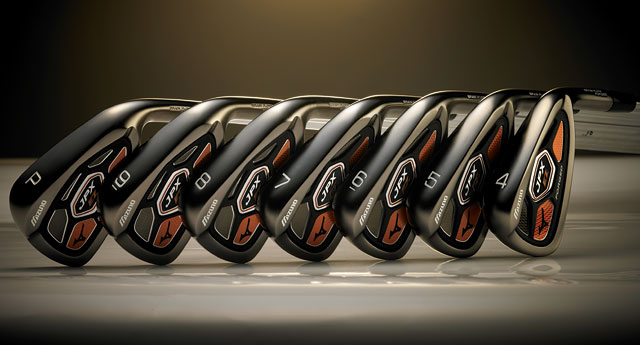 Not to gloat, but here at GTHQ, I’m lucky to try a lot of new equipment and put a wide range of products through the rigors of 18, 36 and sometimes even more play testing. What is "play testing" you ask? Simple. It’s a live testing on the golf course under normal playing conditions. We choose this format of test, based not only on combined decades of experience testing new gear, but because it’s the most real-world, applicable form of testing we think our readers want to know about.

MIZUNO JPX EZ FORGED
Looks And Feel: These irons are forged? They look almost nothing like the company’s MP-Series irons, which are known for precision, Grain Flow Forged construction. But guess what? They are Grain Flow Forged, and they feel as soft and buttery as you might expect from an MP-Series iron. I’m not just saying that, by the way. Only this time, the form comes in a rugged, cavity-back design that’s more streamlined than the JPX-EZ iron, and is still a bigger head shape than I had expected. The slightly radiused, mid-thickness topline, Black Nickel Plating and the composite badge in the cavity combine to create an aggressive appearance that made me more comfortable swinging each iron a little harder and with more confidence. And oh yeah, back to how they feel. These irons have a buttery feel when hit from the sweet spot, but once you deviate from the spot, instead of a thud of a missed blade, you get the extra pop of a cavity-back design. Translation: Missed shots still feel pretty good, especially on the toe where I usually miss.

Performance: I’ve come to expect a high standard of performance from Mizuno irons, and the JPX-EZ delivered in a category that I’m really happen to see them in. Shots fired off the face with a mid-to-high trajectory (which is what I’m used to), and I noticed a gain on average of three to five yards over the irons I usually use. That’s great, but I’m not the kind of player looking for distance. I want an iron that feels like a forged blade but forgives me like a cast cavity-back. Knowing this, I’m okay with sacrificing some of the shotmaking controls I usually get with my set of blades (yes, you caught me, I play blades), so long as the irons feel soft and forgive me a little more. The JPX EZ performed exactly as I had hoped for. I lost some ability to curve the ball on demand, but I gained some added forgiveness where my blades fell short. They aren’t the most forgiving irons, and they aren’t the most maneuverable either. But they’re among the best irons that combine the forgiveness and shotmaking control that I’ve tried all year. Also, I really like that the set has the inclusion of a gap wedge (there is no 3-iron.) Smart play, Mizuno. I wish more companies did that.

Recommendation: There’s a lot of high-tech stuff going on in the DNA of these irons. Grain Flow Forging, CORTECH face thickness, Harmonic Impact Tech and more, but I still can’t shake the fact that the real selling point in these sticks is the fact that they’re forged. Seriously, building a forged iron that feels good is easy. But building one that feels great, performs well and forgives more than I expected, all in a cavity-back design is a monumental success. I recommend this iron for the good-to-better player who needs more forgiveness in their set, but who doesn’t want to give up on the feel of Mizuno’s forging. And trust me, you can still hit a draw and fade with ’em if you really want to. You just won’t need to, that’s all.

Looks And Feel: If you haven’t heard of Volvik, or maybe you have and you thought they only made colored distance balls, you haven’t been paying enough attention. Volvik is gaining a lot of traction here in the U.S. (it’s headquartered in Korea), and the company’s high-performance balls are increasing in popularity. Color aside, we play tested the Vista iS, which is the spinnier offering in the Vista series (the other being the Vista iV). Available in yellow and orange, the Vista iS is a four-piece ball with a Zirconium HZ-III cover.

Let’s start with feel when putting. The ball has a firm, lighter feel that’s quite unique. I mean that in a good way, since I like a snappier feel on the green, and since I use a putter with a face insert, some soft-cover balls actually feel a little too mushy. Not this one. It has a nice click to it when putting. With irons and wedges, again, it’s not a thud feel as much as a pleasant pop. With the driver, hey, we think most balls feel close to the same when you hit it flush, and this one feels just as good as any we’ve tried this year.

Performance: Either I’ve been eating my Wheaties or someone swapped a nonconforming driver in my bag, but I was hitting this ball a mile. It spun more off the tee than I’m used to (I expected that, and the lower-spinning Vista iV is probably more suited for me), but I had no trouble hitting iron and wedge shots that stuck the usually firm greens at Industry Hills Golf Resort. Actually, I had a few shots trickle back–from the rough. That’s pretty impressive considering that this ball doesn’t have a Urethane cover. Granted, it’s not the highest-spinning new ball I’ve hit lately. But it certainly has enough zip for my game.

Where I noticed that snappy feel again was when hitting delicate chips and pitch shots. The ball feels just a little firmer than does some Urethane-covered Tour level balls, but surprisingly, it didn’t affect performance all that much. Finally, this ball is incredibly durable. For whatever reason, Volvik claims the iV is more durable than the iS, but we feel both balls hit the mark in the exceptionally durable category.

Recommendation: If you want a snappier feel on the greens and with short shots, and you don’t want to give up Tour-level performance off the tee and from the fairway, you have to try the Vista iS. The purist will wish it came in white (the iV does), but after a few holes, you’ll forget it’s yellow or orange and be happy you’re making more pars and birdies on the scorecard. I recommend this ball to the good-to-average player looking for a ball that lends big distance, a mid-to-high trajectory and moderate-to-high spin.