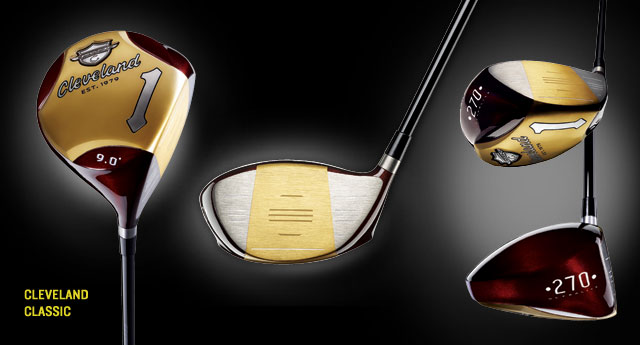 When we first saw the new Cleveland Classic driver in person–better yet, in sunlight–we were amazed. Amazed first at how big a risk Cleveland was willing to take on a retro finish, and second, at how starkly different it looked from most modern-day driver iterations. Nonetheless, as you're about to read, we found the Cleveland Classic to not only be among our favorite new clubs for 2012, but also be a bona fide leading contender for a GT Tech award.

Obviously, we were enthusiastic to take a look at this new driver out on the course, with its deep crimson-colored crown, gold-colored soleplate and trapezoidal face coloring. In our opinion, it doesn't exactly look like a persimmon head, more so an homage to the good fashion taste and designs of the late 1950s and early '60s. We love that big "1" on the soleplate! As for the shape and size, the Classic is a traditional pear-shaped driver with a deep clubface, two traits in driver design that have stood the test of time. We tried the 290g version, but there's also a 270g (shown here) and 310g (Tour) version, as well (the 270g being the __ber-lightweight option for more clubhead speed, the 310g being suited for faster swingers who want added maneuverability). The shaft we tried was the Miyazaki C.Kua 43 shaft, which has a gold color that paired well with the clubhead design. Our only gripe is we wish the lightning graphic on the shaft better matched the retro look, but it's a minor detail. (The stock shaft is black.) Oh, and the faux black leather headcover is a great touch. The club looked great in our golf bag.

FEEL &PERFORMANCE:
The 199g head and the 43g shaft seemed to complement themselves perfectly (with the grip, the driver rounds out at around 290g total). In other words, it felt light (A D2 swingweight) but balanced and easy to swing. Upon our first trial, we found this driver to perform exceptionally well, with shots fired off the center of the face flying high and far with moderate spin. We'd contend that the driver we tried launched the ball higher than most other drivers of the same length and loft, possibly because we were able to clear and release our hands quicker (the lightweight factor makes a difference). The gold trapezoid on the face is detectable by the eye at address and knowing it's there seemed to help us concentrate more on hitting the center of the clubface. As for acoustics, the club sounded like a modern-day driver, without too much high-pitch clang. Our ears were greeted with pleasing pop sounds that seemed to vary, depending on which ball we used.

Now for the good stuff. Because of the big deep-face design, we didn't miss the sweet spot that often, and when we did, we only saw minimal loss of distance–we'd guess between 5 and 10 yards on shots hit off-center. (By the way, the farther away from center contact, the greater your distance/accuracy loss, no matter what club you use.) Cleveland called their design process the "Right Way Engineering," which is the process of removing unwanted weight in the clubhead–either removing it completely or repositioning it in strategic locations in the clubhead (which is usually low, back and to the sides of the head) and pairing the clubhead with a perfectly tuned lightweight shaft and grip. Combine that with a variable face thickness for a greater COR across more points on the face, and you have a very forgiving Classic driver, as we found out.

EVALUATION:
The Classic driver is here to stay. Not only is it a top performer among lightweight drivers for 2012 (we also love the even lighter Cleveland Black driver), its nostalgic look reminds us of the steep history and heritage the game of golf has. Is it the longest driver we tried in 2012? No, but it probably could be with an even lighter shaft and grip, or if we tried the 270g version. Instead, the Classic is the optimal blend of forgiveness and distance, which is exactly what mid- to low-handicappers want. We hit high, bombing shots that seemed easy to control–we were able to hit a few draws and fades on command (despite our limited single-digit handicap skills).

Of course, the Miyazaki shaft we tried held up very well too, with a consistent shot pattern, even though, at times, we swung harder than usual (which coincidentally meant higher shots, not lower ones). And, we didn't notice any accentuated draw bias, which isn't needed here by the way. As for adjustability? That's not needed here either, but having three weight options to choose from is useful toward dialing in the exact type of driver you want. And, of course, you can get a custom shaft (think of one, it's probably available) if you already have one you like. And lastly, and perhaps most importantly, the Classic isn't just a great driver, it's an awesome bargain. At only $299 (which is $100 less than many other new drivers), that's almost the total value of the Miyazaki shaft on its own. You just can't beat that.

What's next for Cleveland? We're not sure, but we hope to see this retro-look/modern-day performance trend to continue. The Classic is our favorite Cleveland driver to date. It's just that good.

2 thoughts on “We Tried It: Cleveland Classic”