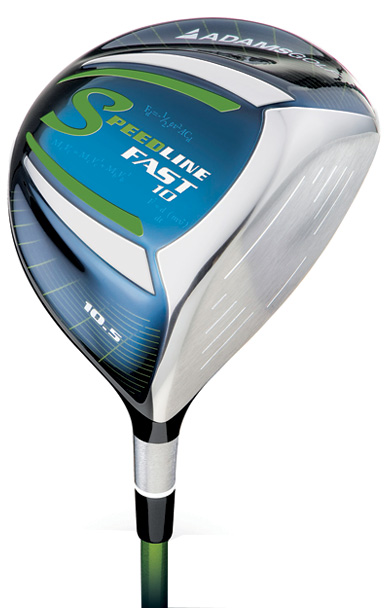 First Impressions: From the address position, the Fast 10 looks like a traditionally shaped, deep-face driver. But turn it over and you’ll see the aerodynamic shaping that, according to Adams Golf, increases the aerodynamics of the clubhead as it cuts through the air, resulting in less air drag and a greater swing speed. If you hit up the Adams Golf Speedline microsite, you’ll see just how this works, including graphic simulations and a wind-tunnel test.

Performance: We killed this driver. And that’s a good thing. Shots hit off the toe and heel still managed to find the fairway most of the time, however we noticed that, on occasion, the ball tended to balloon upward more than we may have liked, meaning, the Matrix HD shaft in the model we tested was a little soft at the tip. Nevertheless, with a proper fitting (which we didn’t have), we suspect this driver would be among the longest drivers of 2010.

Bottom Line: A power hitter, so long as the shaft is fitted properly for your swing. Hey, isn’t that the case with all drivers anyway? 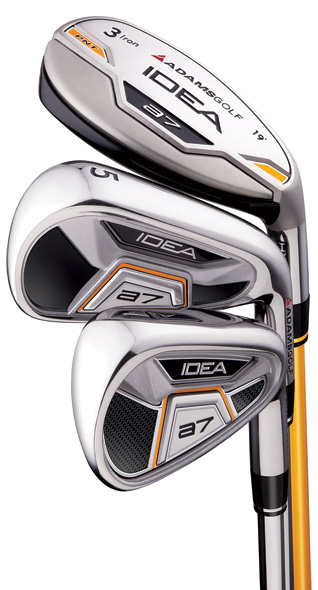 Idea a7 Irons
A mixed set made up of five short irons, one mid-iron and two hybrids. Hmmm, very interesting”

First Impressions: The Idea a7 irons look fantastic. Adams did a great job blending the PW through 6-iron, with progressive offset and a topline and sole width that retain a smaller girth for more shotmaking abilities. We barely noticed the difference in aesthetics when checking out the hollow-body design of the 5-iron. The two hybrids have a compact shape that better players will like.

Performance: Starting with the irons, each performed very well. The thin topline and narrow sole enabled some shot maneuverability, while the dual-cavity design lent out a good amount of forgiveness. If we had to pick, there was more forgiveness in these irons than there was control, but that’s exactly what most amateurs need. The 5-iron has a unique hollow-body design that serves to bridge the set from iron to hybrid. Shots fired with this club flew high and far, but we actually wished the 6-iron was of the hollow-body design, as well. Having just one hollow-body iron seemed a little odd, considering how easy it is to hit. Hey, we’d take it in a 7-iron in this design if it was available, too. As for the hybrids, they performed as one might expect from arguably one of the best hybrid brands in the world. Both make excellent long-iron replacements and are easy to hit. If we did happen to mis-hit either hybrid, it still managed to go fairly straight, albeit with a much lower and flatter trajectory. Solid shots, though, flew high and landed soft. (We dig the UST Mamiya ProForce AXIVCore graphite shafts.)

Bottom Line: A top contender for a 2010 Tech Award, the Idea a7 set is a solid choice for golfers willing to hunker down and get a mixed set. We did wish the hollow-body design was available in more irons, such as the 6- or 7-iron. 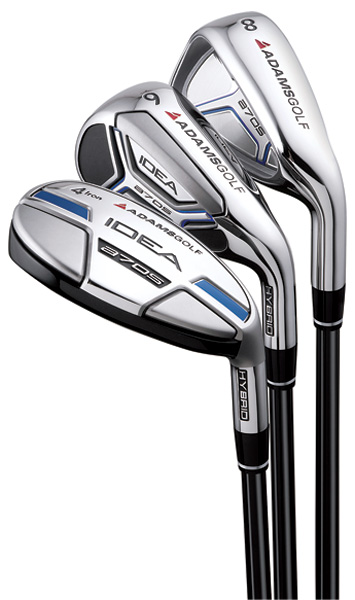 Idea a7OS
A mixed set designed for the average player who aspires to be better–instantly.

First Impressions: This mixed set features three different types of clubs: hybrids, hybrid-irons and irons, all of which blend together rather seamlessly.

Performance: The oversized a7OS set is made for golfers who want a lot of forgiveness in the ways they need it most. With the short irons (8-PW), each has a big clubface and a wide sole to help not only hit higher and straighter shots, but also prevent fat and thin shots. The hybrid-irons, our favorite type of the set, make hitting middle irons so easy that we swore it was like cheating. We noticed that not only are they easy to hit, but these hybrid-irons (6-7) combated a slice very well, since we primarily hit drawing shots with both of them. Finally, the hybrids (3-5) also were long and easy to hit. Like the hybrid-irons, they too counteracted a slice by employing a draw-biased design. Shaftwise, this set comes only in graphite, and we noticed they did wonders for shock absorption, and their lightweight design can help speed up slower swing speeds. But, faster swingers may find they produce a ballflight that balloons and flies too high too soon.

Bottom Line: The a7OS is a solid set for golfers who need both added power and trajectory (on the higher side) with their iron shots. Also, they work wonders for helping golfers who battle hitting sliced shots.

a7 Select Putters
Adams Golf makes putters? Yep. Better yet, they look great and are all value-priced.

First Impressions: There are six different models to choose from in the a7 Select series, from mallet to traditional blade. Visually, the most striking features are the yellow grips and the yellow urethane face inserts.

Performance: Well, well, well. Could the a7 Select be the best putter you have yet to try in 2010? We think it’s possible, considering how well they look and feel. With regards to the “co-molded urethane technology (CUT Design)” insert, our putts had a good blend of responsiveness and firmness–a trait we don’t often find in putters with nonmetal inserts (sometimes they feel too soft). Our favorite model was the 62 Series mallet, with its white-striped alignment aid, plumber’s neck hosel and a 355 gram weight. It felt great and, no doubt, will work well for straight-back-and-straight-through strokes. The rest of the line adhered to traditional designs, each with a micro-milled face and CUT Design insert.

Bottom Line: Every putter in this line ought to be considered if you’re looking for a nonmetal insert putter that isn’t too mushy. Priced at $69, the a7 Select putters are a great buy, plain and simple.