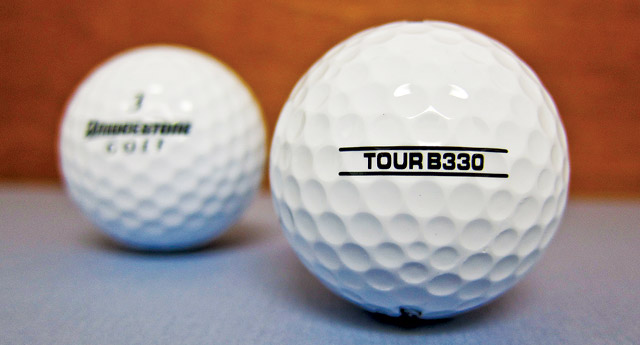 Performance: We aren’t sure exactly what’s brewing in the golf ball cauldrons at Bridgestone (and there’s no way they’re telling anyone), but apparently there were a few more secret ingredients added to make the B330 even longer than it was before. Yes, the B330 is in fact ridiculously long, thanks to a penetrating trajectory that, no joke, splits through the air lower and with more forward roll than previous B330 golf balls. Within 150 yards, the new and improved B330 surprised us. We actually felt as though we had more control than with previous models. And even with the rollback in groove sharpness, we had no problem holding the green. Our shots didn’t fly as high as normal, but we aren’t complaining. Control like that is what we want.

Around the greens, with pitches and chips, again, the B330 had more bite than previous B330s, but it’s still not quite as grabby as other models we’ve tested. Some players actually prefer this, since less spin around the greens makes it easier to hit more consistent shots. When putting, the B330 had a solid, firm feeling. We wish every ball felt like that on the greens. When a ball gets too soft and mushy when putting, we feel as though we lose feel and control.

Bottom Line: While our test was anything but scientific, we can say we felt as though the new B330s were longer and flew lower than most golf balls, but a little higher than previous B330s. As for the length, we put the B330 among the longest urethane-covered golf balls we’ve yet to try.

The new Bridgestone B330 and B330-S (yes, the 2011 models are new versions of both golf balls) are an amalgam of distance and spin designed for better players. Before we begin, let’s just say that the B330 and B330-S golf balls already rank high on our list, mostly due to the fact that they perform exactly how the box says they’re supposed to perform. They’re labeled as golf balls more suited for golfers with at least 105 mph driver swing speeds. (Any slower, and Bridgestone steers their players toward the softer B330-RX.) It’s with a faster swing speed that you’ll be able to take advantage of the four-piece construction (more on that in a moment). Second, the B330-S is clearly identified as the ball that has a greater amount of spin and a softer feel, making it a more appealing choice for players who like to finesse the ball a bit. (Remember, although the B330 doesn’t have the highest spin rate we’ve seen around the greens, it still has a urethane cover, meaning it spins more than most non-urethane-covered golf balls on the market. So don’t rule it out as a non-finesse ball.) On the other hand, the B330 is firmer, and a solid choice for players who tend to have a steeper driver angle of decent and wish to keep their trajectory lower and prevent ballooning.

General Technology
How the components of a golf ball work depend greatly on the type of shot being played. Here’s a look at four pieces of a ball and what they’re designed to do for different types of shots.

Cover: The cover of the golf ball has the greatest impact on shorter shots around the green and greatly determines the amount of spin a ball can create. The softer the cover, the more friction there is between the ball and clubface, thus creating more spin and also producing a lower launch angle. The B330-S has a slightly softer cover than the B330, thus it has more spin around the greens for players who require added control.

Outer Mantle: The high spin that the cover of the ball can generate is preferred on short chip shots around the green, however it can be a detriment to distance and accuracy on longer full shots. In an effort to counteract the increased spin off all other full shots as a result of a soft cover, the mantle layers mainly work to reduce spin. The outer layer primarily impacts spin performance on mid- to short-iron full shots where the ball isn’t severely deformed at impact. It helps reduce spin and produces a higher launch for greater distance.

Inner Mantle: The inner mantle also impacts spin performance, especially on driver and long-iron shots where the golf ball is greatly deformed at impact. And it works to reduce spin, providing a higher launch angle and longer carry distance.

Core: Finally, the core of the golf ball is the main engine for distance on full shots, while it also has a large impact on the way a ball feels to the player. The B330 has a firmer core, meaning it feels firmer than the softer core found in the B330-S. The core of the B330 produces a higher initial velocity, generating greater ball speed. –Brandon Sowell, Bridgestone Golf

Performance: We were big fans of the previous B330-S, which made us even more curious about any new improvements made to the 2011 model. When comparing overall shot length, the B330-S had the distance we’d come to expect, but with a higher trajectory than we found with the B330. It’s not like that’s a bad thing; in fact that’s exactly what’s expected with this ball. With drivers and even with woods, we found the B330-S to have a soft feel with comparable distance to last year’s versions.

With approach shots, pitches and chips, it’s a whole different story. The B330-S, already dubbed as a higher-spinning ball, spun like crazy with short shots! Maybe this is a reaction to the reduction in groove sharpness, but the B330-S had ample bite to help negate the new rulings. The higher the lofted iron, the more spin it seemed we were able to generate. Now, mind you, our “test” was no more than an actual playing test with no scientific data to back it up, but we can say confidently that we saw significant spin with our shorter iron shots. No doubt. We saw a boost in trajectory, as well. With pitches and chips, the B330-S spun more than the B330, but not so much that we had a hard time controlling our shots.

Bottom Line: The B330-S felt softer than the B330, and had a higher trajectory and more spin with virtually every club in the bag. Around the greens, these balls were real showstoppers, showing they have plenty of bite and stopping power where it’s needed most.