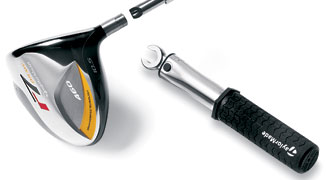 Heeding their famous teaching advisor’s words, the engineers in TaylorMade’s R&D department set out to design the ultimate fitting system that would not only properly fit golfers for a full set of clubs, but also allow them to try the actual clubs before making a purchase. They accomplished this task by analyzing six years worth of data from the company’s MATT (Motion Analysis Technology by TaylorMade) System, which focused on launch conditions and their significance. The MATT system records and animates a golfer’s swing and body in extreme detail during the act of hitting a shot, while also measuring numerous stats like swing speed, initial ball speed, swing path, face angle, launch angle and ball spin. Through this study, TaylorMade engineers found that allowing players to achieve optimal launch angles throughout the set was critical to creating maximum distance and increased accuracy.
_Ê 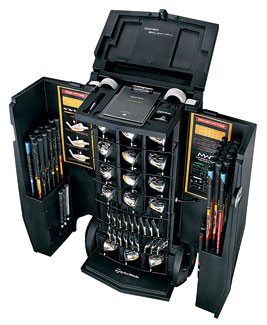 Once these facts were determined, TaylorMade’s R&D team got to work, and the eventual result was the SelectFit System, which is comprised of a fitting cart that contains 15 driver heads of varying lofts, as well as the full line of TaylorMade driver models, including the r7 425, r7 425TP, r7 460, r7 460TP and the r7 Draw. In addition to the various driver heads, the SelectFit System contains 17 different premium aftermarket driver shafts in a variety of flexes, lengths and weights. When combined with the company’s patented Movable Weight Technology, the SelectFit System provides golfers with more than 60,000 possible driver options, which should be more than sufficient to fit just about anyone.

Along with the drivers, the SelectFit System also contains 18 different iron heads, including the r7 TP, r7, r7 Draw and r7 CGB Max. A variety of lie angles, ranging from four-degrees flat to four-degrees upright, accommodate the full spectrum of body types, while there are also 17 different premium graphite and steel iron shafts of varying lengths, flexes and weights. In the end, more than 250 possible iron combinations are available through the SelectFit System.

Possibly the most noteworthy feature of the system is the unique technology that allows fitters to connect clubheads and shafts quickly and easily and provide golfers with clubs that feel exactly the same as those they’ll eventually purchase. This “quick change” method produces clubs with the same swing weight and playing characteristics as a production golf club, so players who are fitted with the SelectFit System know exactly what they’re getting. According to Brian Bazzell, TaylorMade’s designer responsible for the SelectFit System, the clubs in the system can be taken out on the course and played with for several rounds without any problem. If you’re interested in finding properly fitted clubs that will almost surely outperform your current off-the-rack sticks, the SelectFit System is worth a serious look.

The TaylorMade SelectFit System is available at preferred locations. www.taylormadegolf.com