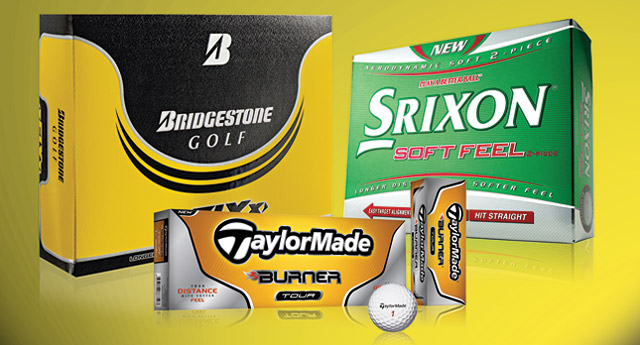 If you’re like most avid golfers, you’re already looking ahead and wondering what cool gear is coming in 2011 to help you lower your index. Golf Tips was given sneak previews of some upcoming equipment. And while we don’t have a crystal ball, we can only assume at this point which trends will be hitting your local golf shop come springtime. Consider them educated hunches.

HOT NEW GOLF BALLS THAT ARE PRICED JUST RIGHT. Some of the hottest new golf balls are also the most affordable. Bridgestone’s FIX, for example, generates plenty of spin around the greens and low spin off the driver–just the way you want it to. It features a low-compression core and soft cover. Srixon’s Soft Feel 2010 does the same and improves lift, so you won’t balloon shots. TaylorMade’s Burner Tour sports a new soft cover and large, low-compression core. $20/doz or less for all of these new orbs.

WEDGES WITH SOFTER-EDGED GROOVES. This is beyond a trend, it’s a sure thing. Wedges with aggressively edged grooves are officially not being made anymore, thanks to new USGA rules. But wedges with softer-edged grooves aren’t noticeably more difficult to hit–just ask any PGA Tour pro, who had to use them this past year. Mizuno’s new MP T-11, Titleist’s TVD and PING’s Tour S highlight a slew of new soft-edged models from major manufacturers hitting the market.

MORE CUSTOMIZED PUTTERS. There’s been a strong onslaught of putter customization the past year. You can easily find putter-fitting studios all over the country that use high-speed video analysis to show you exactly what dynamics are happening during your putting stroke and suggest a putter model that may help you find the hole more often, given your unique stroke. On top of that, putter manufacturers, such as Edel, Scotty Cameron, PING, Odyssey and TaylorMade Rossa are letting you individualize various aspects of your putter. Depending on the company, that can include specific face insert material, weighting, head material, paintfill color, length, grip, loft and more.

MORE PERSONALIZED DRIVERS. The past couple of years revealed many adjustable drivers that allowed you to better dial in the ballflight you wanted. Now comes a whole new lot that’ll help you further personalize the long ball. Titleist’s 910D2 and D3 drivers for 2011 offer you the ability to adjust loft and lie angle independently of one another. On previous models from all brands, you essentially had to change both at once. The D2 also has a thinner crown that allows for a steeper curvature, making it faster through impact. And Cleveland’s upcoming Launcher driver models–while not adjustable–will allow you to get a specific weighting scheme that correctly fits you to your optimum distance, feel and control.

THE RETURN OF FAIRWAY WOODS. Expect to see loads of fairway wood options this year, which faded out to make way for hybrids in the past few years. Tour Edge’s Exotics multimetal Trilogy fairway woods aim to ease shots from deep rough, firm turf and lousy lies. The large diamond-shaped inner rail glides the clubface into a square impact position and minimizes divots. The sole’s two outer rails and one inner rail help turf interaction and mis-hit stabil-ity, while a 60-gram internal weight chip lowers the CG. Titleist’s 910F will wow golfers, as will the 910Fd model, which is a deep-faced, low-lofted, larger-headed 3-wood designed to also be used as a driver on long par-3 holes. Cleveland’s upcoming fairway woods are ultralightweight, which means you can pick up clubhead speed and thus distance on your shots.

ULTRA-COMFORTABLE CARRY BAGS. The latest lot bears features that make these bags much more comfortable to shoulder. Cleveland’s new CY Hybrid and CG lightweight stand bags both sport the new-for-2011 comfort strap system that’s designed to restrict unnecessary bag movement. It’s accomplished through the addition of shock-absorbing materials that have been added to each strap–they effectively balance the bag and reduce unwanted movements and bouncing. Sun Mountain, meanwhile, has put its popular hip belt on its upcoming Swift ZG bag, moving weight from your shoulders to your hips and making it exponentially more comfortable. And Burton will make a comeback in 2011, promising bags with “luxury hardware” on them, that may well translate to enhanced comfort.

PRICEY OUTERWEAR THAT WILL LAST FOREVER. Nike calls its upcoming N-Destrukt product utilitarian. adidas Golf armed Bandon Dunes caddies with a customized model because it’ll conquer anything. But you can get the consumer versions of both. However, they don’t come cheap. Nike’s will run $650 and adidas’ about $500. Both models include jacket and pants.

RETURN TO FLUORESCENT GOLF BALLS. Last year’s Srixon Z-Star and Z-Star X fluorescent-colored “Tour Yellow” balls were so successful that the company will expand its yellow offerings in 2011 to also include the TriSpeed Tour. Bridgestone will also offer yellow and orange versions of its popular e6 ball. Interestingly, Bridgestone reports that nearly 40 percent of golf balls sold in Japan are colored.

TURF-FRIENDLY CLUB SOLES. You’re going to hear lots about fairway woods, hybrids and irons with soles that improve interaction with the turf. The soles are more rounded so that they won’t dig in and stifle your shots, but rather will glide easier through the turf and make the most of your lie. Look for new hybrids and irons from Cobra to do the trick nicely, as will Mizuno’s upcoming JPX-800, MP-53 and MP-63 irons.

NEW, RICH-LOOKING WEDGE FINISHES. Manufacturers have always offered you a choice of wedge finishes: Chrome, bronze, satin and raw finishes have been among the most popular. Now some market leaders have debuted new and different luxe finishes on their latest wedges. Buyers of PING’s new Tour-S wedges have the option of getting the product in a golden Rustique finish that tarnishes naturally. And Titleist’s new Bob Vokey TVD model is offered in two distinctive new finishes: Bright Brushed Chrome, which isn’t a mirror finish but is brighter than regular chrome, and Oil Can Zero, which rusts gracefully while bearing a champagne look.

HYBRIDS REPLACING 5- AND 6-IRONS IN IRON SETS. PING has long been considered a trendsetter–the company fathered cavity-back irons, after all. So golf circles recently took notice upon seeing PING’s new K15 Iron/Hybrid set that offers stainless-steel hybrids in 3H, 4H, 5H and 6H hybrid clubs. In fact, the irons in the K15 set start at the 5-iron. Mind you, there have been several all-hybrid sets out in the past. But this blended set may truly raise the bar.

GLOVES WITH EXTRA BUILT IN. A golf glove is no longer there just to protect your hand from blisters. Some of the latest models have a little extra built into the chassis. For instance, Callaway’s Ion X has a metallic wristband. And TaylorMade’s Tour Preferred has a black ion cuff that wicks moisture away from your skin.