PING Rapture Series
With the introduction of the highly successful G5 line, PING firmly repositioned itself as one of the premier club manufacturers in the world. The new RAPTURE series goes one step further in the technology department, with each club in the line featuring high-tech materials and the ultimate in performance. Highlighting the line, which also includes fairway woods, hybrids and irons, the RAPTURE driver features a 460cc titanium-composite clubhead with a patent-pending web crown design that effectively increases MOI for greater forgiveness and higher launch angles.
www.pinggolf.com _Ê_Ê_Ê

Titleist Scotty Cameron Detour
There was a time when Scotty Cameron putters were associated strictly with traditional designs and milled carbon steel construction. Cameron showed his desire to push the envelope of performance and design with the introduction of the Futura models and continues that tend with the new Detour model. Featuring a unique body style and sightline, the Detour is built from a combination of Aircraft Aluminum and 303 Stainless Steel that provide a soft feel and attractive look. Available with a double-bend or straight shaft in multiple lengths._Ê
www.titleist.com
_Ê_Ê 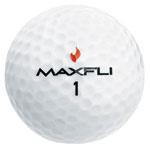 Maxfli Fire
With the introduction of the Fire, Maxfli's days as a traditional golf ball manufacturer may be over for good. The new model, which will be flying high with John Daly throughout the '07 PGA Tour season (a Tour version is soon to come), features a three-piece design with an HPF 1000 SpeedMantle that works with a special core design to increase COR for maximum speed off the clubface. The combination of these elements and one of the thinnest Surlyn covers available give the Fire a soft feel and excellent durability, as well as the aforementioned distance. A great choice for budget-minded golfers who want to hit the ball as long and pure as John Daly.
www.maxfli.com _Ê_Ê_Ê 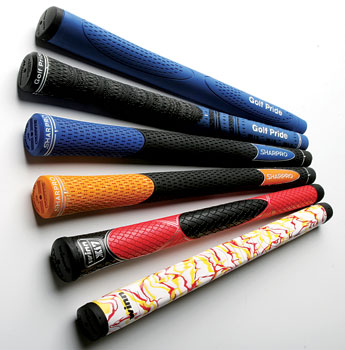 Grips Galore
Golf Pride might be one of the oldest names in grips, but that doesn't mean company designers rest on their laurels. Responding to the demand for more variety, Golf Pride offers the New Decade MultiCompound model in blue, shamrock, orange, pink and red. A New Decade putter grip is also available in blue and red. www.golfpride.com _Ê_Ê_Ê_Ê_Ê
_Ê
The new OC2 grip from Sharpro, a relative newcomer to the U.S. market, is also available in multiple colors and features a unique combination of buffed velvet and optional cord gripping surfaces.
www.sharpro.com _Ê_Ê_Ê

Winn continues to develop unique products like the new Xi7, which offers a firm feel and enhanced torque resistance for less hand fatigue and increased durability. Meanwhile, the Marble Putter Series adds a touch of color to your flatstick.
www.winngrips.com _Ê
_Ê

Tour Edge GeoMax Driver
The goal of the GeoMax's unique design was to maximize MOI and resistance to twisting on off-center hits while still providing golfers with a somewhat traditional-looking clubhead. This goal was accomplished by an unusually high breadth ratio (the measurement of the face from heel to toe divided by the distance from face to back), as well as the strategic placement of a 20-gram tungsten weight in the rear of the sole. Further enhancing the performance of the GeoMax is a specially designed Grafalloy shaft.
www.touredgegolf.com _Ê_Ê

Cleveland HiBore XL
After the successful introduction of the original HiBore last year, Cleveland is back with the new HiBore XL—an elongated and stretched-out version of its predecessor. The HiBore XL features what Cleveland Golf calls "Distance Driven Geometry," a design that's geared toward producing straighter and more accurate drives from more places on the clubface. The HiBore XL Tour is also available, featuring a slightly smaller clubhead, an open clubface angle and a premium FIT-ON Fujikura shaft. Finally, for the utmost in game improvement, there's the new HiBore irons, which provide hybrid-like looks and performance. www.clevelandgolf.com

Nike Golf
In addition to some impressive drivers, Nike Golf offers a new series of Unitized putters that feature a shaft and milled head that are laser welded together, resulting in a resounding feel and performance. In addition, Nike Golf offers the Juice golf ball, a model designed to provide a combination of ultimate distance and all-around performance._Ê
www.nikegolf.com 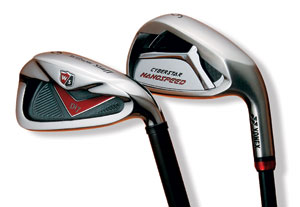 Wilson Di7 Irons
For many years, Wilson Golf was well known for manufacturing extremely traditional, forged irons and wedges. Though the company still offers such products, Wilson's club designers have embraced the technological age enthusiastically and now focus on performance rather than tradition. Proof of this fact lies in the company's newest offering, the Di7 Irons, which feature an enhanced weighting scheme, a relatively thin topline and wide sole, as well as a thick rear flange that pulls the CG away from the face for greater forgiveness. The Di7 Irons also feature an elastomeric paint coating in the back cavity for improved vibration dampening and an overall softer feel.
www.wilsongolf.com

Yonex Cyberstar Nanospeed
Yonex is expanding its Cyberstar series once again, this time with the latest Nanospeed irons that combine three iron models in one set: the long irons that feature a hollow-body construction; the mid-irons feature a fully cavity-back design; and the short irons feature a half-cavity shape. All models have an Elastomer compound and graphite plate behind the stainless steel face, as well as a new iron version of Yonex's Nanospeed Shaft.
www.yonex.com _Ê
_Ê

Mizuno MP-R Wedges
Joining the already successful MP-T series, the new MP-R wedges from Mizuno are aimed at players looking for minimal offset and a classic, round head shape with Mizuno's legendary forged feel. The most noteworthy design feature of the MP-R wedge series is the addition of a unique "workshop grind" sole_Ê that's made to provide advanced playability from a variety of greenside lies._Ê Available in Black Nickel and Chrome finishes.
www.mizunousa.com _Ê_Ê

TaylorMade r7 Draw Woods, Hybrids and Irons
Every golfer who struggles with slicing will be happy to hear that TaylorMade's engineers and club designers have come up with a cure for what ails you—an entire line of clubs made to help hit shots that move right-to-left. Consisting of a driver, fairway woods, hybrids, irons and wedges, all of the clubs in the r7 Draw family feature Draw-Weighted Technology that moves the CG of each club back toward the heel of the clubhead. This design feature simply makes it a lot easier for the average golfer to square the clubface through impact, reducing the likelihood of creating slice spin and encouraging a shot that goes straight or even a bit right-to-left. For any avid golfer who tends to lose his or her shots to the right, these clubs are worth a serious look.
www.taylormadegolf.com _Ê_Ê
_Ê_Ê

TaylorMade r7 TP iron
All TaylorMade clubs bearing the TP (Tour Preferred) distinction are geared toward more accomplished players who favor playability and control over distance and forgiveness, and the new r7 TP iron is no exception. However, a much larger cavity than is usual for a "player's" iron, as well as the addition of Inverted Cone Technology and a shock-absorption web in the cavity (bonded with 3M VHB Tape), make the r7 TP much friendlier to hit than the vast majority of blade irons out there. Minimal offset, slightly flatter lie angles and tour-configured soles are also featured, as are True Temper Dynamic Gold steel shafts._Ê
www.taylormadegolf.com _Ê_Ê
_Ê

Mizuno MX-25 Irons
Every golfer knows Mizuno's forged irons are among the best in the business, but not all players think they play golf well enough to put a set in their bags. The new MX-25s should put this thought to rest, as they're specifically designed to be playable for almost any level of golfer. Built with Mizuno's famed Grain Flow Forging technology, the MX-25s also feature a H.E.M.I. COG Pocket Cavity that helps move weight down and away from the clubface for better resistance to twisting and improved overall playability. A new, three-dimensional "X" cavity pad adds mass behind the hitting area for improved feel, while a triple-cut sole adds versatility. Also new from Mizuno are MP-67 irons, which combine the company's traditional forged blade design with Cut Muscle Technology, and MX-19 irons, designed for ultimate game-improvement performance._Ê
www.mizunousa.com _Ê
_Ê_Ê_Ê_Ê 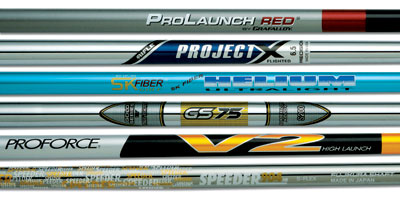 SK Fiber Helium Ultralight
The Helium Ultralight shaft is a solid option for players who want added swing speed. However, this doesn't mean SK Fiber isn't sticking to what they know best—the expansive line of long driver-friendly shafts and iron shafts can accommodate a wide array of swing styles and abilities._Ê
www.skfiber.com

True Temper GS75
The GS75 is possibly the lightest alloy golf shaft ever introduced, giving golfers the opportunity to combine the benefits normally associated with graphite iron shafts, such as added clubhead speed and distance, with the consistency and feel typically associated with steel. Weighing in at 78 grams, the GS75 is an ideal option for golfers who are currently playing with graphite iron shafts but prefer to play steel.
www.truetemper.com _Ê_Ê

Fujikura Speeder 904HB
Anyone familiar with Fujikura's Speeder line of composite shafts knows how well they perform and how good they feel. The key to these impressive traits is a proprietary Triax material, which is a carbon fiber that's woven in a honeycomb structure that gives each shaft greater resiliency. The Speeder 904 HB is simply a premium-quality hybrid shaft that takes full advantage of Fujikura technology.
www.fujikuragolf.com _Ê_Ê_Ê

OGIO The Edge
While OGIO's latest stand bag, The Edge, might be a little heavier than your typical carry bag, it's got all the features you'd want in a modern, functional cart bag, such as OGIO's patented Zipperless Ball Pocket, ball silo and internal cell phone pocket.
www.ogio.com _Ê_Ê

PING iWedge
The PING Eye2 wedge was one of the most popular models on the PGA Tour at one time due to an impressive combination of playability, forgiveness and feel. These same attributes are embodied by PING's new iWedge, which probably explains why it's been embraced so quickly by some of the best players in the world. Featuring an Eye2 sole design with a "sand cup" that provides tons of versatility, the iWedge is also built with a multi-level cavity that helps locate the CG toward the center of the face for improved feel, as well as to create PING's "traditional" look. Available in lofts ranging from 50 to 60 degrees and a variety of steel and graphite shafts.
www.pinggolf.com _Ê
_Ê_Ê