PING golf clubs have always been closely associated with technology and advanced engineering, which isn’t surprising, considering the long tradition the company has of creating products that adhere to the “form follows function” philosophy. From the original Eye2 iron, first introduced in 1982, to the TiSI Tec driver to the extremely advanced Rapture series, PING engineers have always put performance first, along with a strong focus on proper fitting.

Today, PING is moving forward with a new line of woods and irons, which includes the G10 Driver, fairway woods and hybrids, as well as Draw versions of both the driver and fairway wood. In addition, G10 game-improvement irons and more player-friendly i10 irons are also new. As always, company designers have pushed the envelope to provide players with a variety of products that are geared toward providing optimum performance for the full spectrum of ability levels.

Power Broker
PING engineers utilized a Cray Supercomputer to optimize the crown, sole and face structure of the G10 Driver, a move that maximizes energy transfer through impact. Other improvements of the G10 include a thinner crown and face for a larger discretionary weight budget, a lower and deeper CG location for higher launch and lower spin rates, and a patented variable face thickness design for more consistency on hits across the entire clubface.

Draw Weighting
A G10 Draw model is also available featuring an internal weight pad that’s positioned in a deeper area of the clubhead toward the heel. When combined with a hosel that’s 0.25-inch forward of standard, this weighting scheme effectively promotes a right-to-left ballflight by increasing clubhead rotation through the swing. 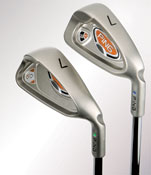 Smaller Is Better
Designed to appeal to players who like a blade-style club that appears smaller at address, but still provides plenty of forgiveness, the i10 irons feature a thin top line and reduced offset. A narrow, cambered sole provides playability from a variety of lies for those who put a premium on shotmaking.

Low In The Toe
The G10 irons are designed with extremely low toe weighting for increased MOI, and hence, enhanced forgiveness and straighter shots on mis-hits. The oversized clubhead also features_Ê and a unique cavity shape and a wider sole for less digging.

Forgive Me
The CG of the new G10 irons is located low and deep in the clubhead for higher-launching, lower-spinning shots. A new Custom Tuning Port adds to the stability of the club on off-center hits, while an elastomer CTP insert improves the sound and feel at impact.

Trajectory Control
The Custom Tuning Port on the i10 irons features a rib-like shape that stabilizes the face for improved feel. The extra weight provided by the new cavity design is placed in the toe of the clubhead to increase the MOI, making the i10 irons significantly more forgiving than typical blade-style irons.

AWT Shaft
PING’s new steel shaft featuring Ascending Weight Technology incorporates a “sliding scale” method to iron weighting. Long iron shafts are lighter than short irons to help create a more consistent feel throughout the set (the lightest club should be the driver; the heaviest the wedges). The result is more clubhead speed and distance in the long irons and more control and consistency in the short irons.