TaylorMade Golf has made a name for itself the past several years by re-inventing its product lines. That makes its 2017 a bit unusual as the company’s new M family of metal woods line, which debut here at the PGA Merchandise Show, carry the same name as the 2016 line. Oh, and there’s that small bit of news that a guy named Tiger has joined the TaylorMade team, which was announced on Jan. 25, the first day of the show. So that’s one new name for sure.

The technology in the 2017 line, meanwhile, is different than the 2016 line, according to TaylorMade, in that it has “have pushed the boundaries’’ of golf club engineering with the M1 driver.

The two-tone crown of the M1 driver, according to TaylorMade, incorporates a proprietary six-layer Carbon composite panel that is precision-fit to the skeletal titanium body using an FF2FF process, which the company says is a breakthrough engineering technique that results in manufacturing repeatability for consistent, aggressive looks and performance.

TaylorMade’s P750 Tour Proto irons have been in Jason Day’s bag for the ast few weeks, but they’re making their public debut here at the PGA Merchandise Show. 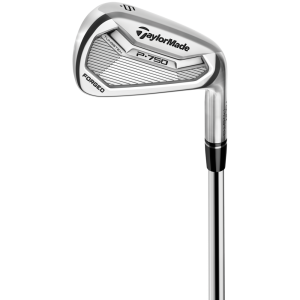 The P750 Tour Proto irons are true forged blades, each with a shallow cavity, and made of 1025 carbon steel. TaylorMade says each iron is created using a new, multi-step forging process that culminates with a “high tonnage’’ strike, three times more forceful than a standard forged press.

This process, according to the company, ensures precise, near-net head shaping requiring minimal hand polishing, resulting in a pure “players’’ iron with soft feel. The face and grooves are CNC milled for high precision, as is as the back cavity of the iron. TaylorMade says the extra step of milling the cavity ensures that the face thickness, CG (Center of Gravity) position and weight distribution are maintained to the highest standard.

P750 irons feature a thin topline (thinner than the P770) and minimal offset for a blade-like look preferred by our Tour players. Additionally, TaylorMade says the P750 irons each incorporate a narrower sole and tighter leading edge for improved turf interaction.