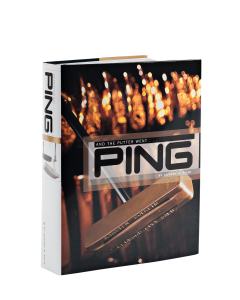 PING’s new book, “And The Putter Went…PING,” an inspiring and comprehensive look inside the family owned company that revolutionized the way golf equipment was designed and manufactured, goes on sale May 1.

The book chronicles PING’s heritage and its on-going efforts to advance golf technology for the benefit of golfers of all skill levels. It takes readers behind the scenes of a genuine American success story that began in the family garage of Karsten Solheim, a Norwegian immigrant and mechanical engineer who invented the PING putter in 1959.

Written by Jeffery B. Ellis, author of “The Clubmaker’s Art: Antique Golf Clubs and Their History,” the book contains nearly 1,000 pictures, many never-before published, to offer a visual history of the brand. Ellis also reveals several heart-warming and humorous stories for the first time. More than 70 people were interviewed and thousands of hours were spent researching the company archives and industry pe          riodicals to help illustrate the rich and influential history of the brand named for the sound made by its first product. the PING 1A putter.

““And The Putter Went…PING” represents a 4½ -year effort with contributions by several current and former PING employees, friends of the company, golf professionals and industry leaders who shared their memories and insights into what has made PING such a special company with millions of loyal customers all over the world,” said John A. Solheim, PING Chairman & CEO.

“We’ve shared a lot of personal stories and recalled many special memories dating back to the early days in our garage and leading up to the company we are today,” Solheim continued. “Our family and employees have been very fortunate to be part of the golf industry for nearly 60 years. The book is a reflection of our never-ending commitment to making golf more enjoyable, and a tribute to all the golfers who have relied on PING products to play their best. We wouldn’t have a story like this without their belief in our products and processes.”

The 530-page, 16-chapter book captures Karsten’s pioneering spirit and his amazing ability to solve problems through innovative solutions that set industry standards still in effect today. You’ll learn about the early obstacles the company faced and the Solheims’ determination to overcome them while staying true to the principles that still guide the family owned company today. Two chapters are devoted to the highly publicized and vigorously debated “square groove” controversy of the late 1980s, in more depth than ever reported.

For fans of PING’s extensive product line, the book documents the evolution of PING’s innovative and game-changing products and the inspiration behind them, including the story of the legendary PING EYE2 iron and its impact on golfers around the world. The unmatched success of the Anser putter and its continued influence on putter design more than 50 years after its invention is covered in detail.

Karsten’s pioneering role in custom fitting and the impact of tour professionals on his fitting process is documented in a chapter that takes readers inside the logic of the iconic PING Color Code Chart and the science behind the company’s top-rated fitting systems.

The book is published by Zephyr Productions, Inc.