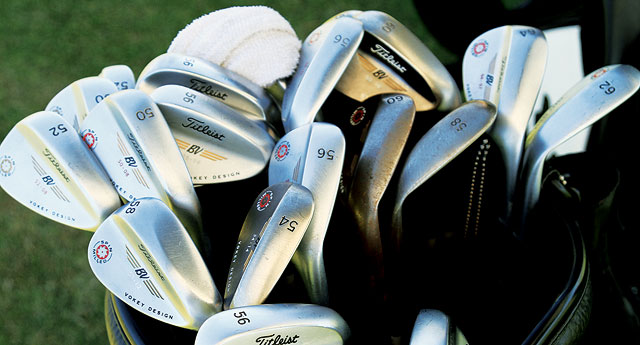 1. Gap Analysis With Scoring Clubs
A majority of the strokes you take in a round are inside 100 yards, so it makes sense to have a club for all situations. Today, manufacturers are making pitching wedges with loft as low as 44_¡, which can create a large gap between that and a traditional 56_¡ sand wedge.

2. Lofts In Fairway Woods
Imagine a garden hose, with the water pressure turned way down. It’s hard to make the water shoot very far, unless you raise the angle of the garden hose so the water shoots out higher. It’s the same with fairway woods. If you don’t have a lot of clubhead speed, there’s not enough loft on a 3-wood to maximize carry distance. In many cases, slower swingers will hit a 5-wood farther than a 3-wood, just because it’s easier to launch the ball at the proper angle.

3. Bounce In Wedges
Most people recognize the loft of a wedge, but there’s another important factor–bounce. If you’re a "digger," meaning you take bigger divots with your wedges, or if you play on a course with deep rough around the greens, you’ll benefit from higher bounce. Low bounce will tend to benefit "sliders," those who play on a course with hard, tight lies. It’s a good idea to have different bounces in your wedges, so you can have a club for all conditions.

4. Loft On Your Putter
Most people are surprised to find there’s loft on a putter. There is, because when the ball comes to rest on the green, its weight causes the ball to sit in a slight depression. Loft is needed to lift the ball slightly before it starts rolling. Everybody has a different putting stroke; some forward-press and deloft the putter, and others may add loft to their putter at impact. It’s important to have the correct amount of loft so the ball comes off your putter properly.

5. Driver Length
Much is made of longer drivers to gain more distance. On a robot, that is true. Unfortunately, not many of us swing like a robot. The real key to distance is hitting the ball on the sweet spot. You want to use the longest driver that you can consistently hit solidly on the center of the face.

6. What’s The Best Driver?
Most players will hit drivers, and evaluate them based on one factor–distance. If they hit one good shot in five, and it goes 10 yards farther, they think they’ve found the Holy Grail. But the goal is to get around the course in the fewest number of strokes, which means getting the ball in play off the tee consistently. You’ll score better with a driver that allows you to hit more fairways, even if it means sacrificing a few yards.

7. Difference In Putterhead Styles
There are many different styles of putters, and it can be confusing as to which is best for you. If you’re trying to swing the putter on an arc, a putter with "toe-hang" is built for you. Those who try to make a straight-back and straight-through stroke will benefit from a "face-balanced" putter. Finally, if you struggle to hit putts solidly, try a high-MOI putter. These are the large, mallet-style putters. The sweet spot is much larger, and distance control will be easier for you.

8. How Your Height Affects Club Length
Most people assume that taller people need longer clubs, and shorter people need shorter clubs. This is not always the case. The length of your arms plays a big role. A tall person with long arms may need the same-length club as a much shorter person with shorter arms. Rather than use height to determine the proper length, take a look at the distance from your hands to the ground. That’s more relevant.

10. Set Makeup
We’re allowed to carry 14 clubs, including the putter. We want to have a club for every situation–no more, no less. If there’s a club in your bag that you can’t/won’t hit, replace it with a club that’ll help your game. For example, some golfers still carry a 3-iron. And for some, even if hit solid, it doesn’t go any farther than the 4-iron. Replacing the 3-iron with another wedge, or hybrid, will result in lower scores.