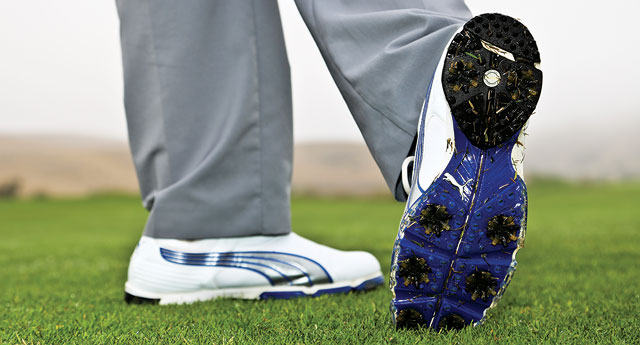 “Minimalism” is the hot concept in the shoe game right now, something expropriated from running, where athletes have been moving away from heel-raised, thickly padded, highly supportive shoes. The basic premise is that a lower, flatter, wider, more flexible, less artificially supportive and, in the case of golf, typically cleatless shoe is more conducive to a natural, athletic posture, and easier on the feet and bod, too.

“I look at it from the performance and injury perspective,” says Dr. James C. Chesnutt, medical director of the Oregon Health and Sciences University’s Sports Medicine program, of this less-is-more way of building shoes. “In general, it’s good for people to use shoes that allow their feet to be strong and functional, to flex, and not be overly supported. They need shoes to protect their feet from the surfaces they’re walking on, to put them in natural positions, and to give them traction. They need stability.”

Chesnutt explains that footwear allowing a neutral foot position places people in a taller, natural, athletic posture, with flatter hips, butt slightly back and weight centered, the quarterback-at-snap/skier stance that eludes many higher-handicap or less-fit players. With a low profile and broad forefoot added in, stability is enhanced–support isn’t necessarily stability–as are balance and foot-feel.

TRUE linkswear is the poster child for minimalist-only shoe manufacturers in the market, with every shoe it makes possessing what the company calls the five fundamental elements of a truly neutral, “barefoot” shoe: zero-drop (the heel sits at the same level as the forefoot), wide toe box, low weight, thin sole and flexibility.

“We set out to build a comfortable golf shoe,” says Jason Moore, director of marketing and product development, of TRUE’s launch in 2009. “Instead of designing a shoe and shoving a foot into it, we designed a shoe around a foot. It’s a better platform for balance and stability, and the end result is comfort and performance.”

TRUE contends minimalism is a destination, not a journey; the quip that there’s no such thing as being kinda pregnant comes to mind. As a startup in a game dominated by huge corporations with years of tradition and broad-spectrum marketing, TRUE rolled in with a single blueprint. Other companies have taken a more phased approach, one with the design cues of minimalism parsed out in gradients; a shoe can be flatter or lower or more flexible, or some combination thereof, and it will benefit some players. As Dr. Chesnutt offers, not every person is physically able to return to the native position.

Perhaps most famous for its Street model Fred Couples donned at the 2010 Masters, ECCO has the industry-typical array of models to fill various performance, feel and stylistic niches: wingtip to sport to crossover, cleated and not.

“ECCO takes a foot-first approach and thus offers a wide array of styles that incorporate different technologies,” writes Jesper Thuen, sponsorship, public relations and event manager. “Golfers come in all shapes and sizes with a great deal of personal preferences. We need to design shoes for all types of players, including those seeking a more natural motion. But even within that group there are preferences, so the BIOM line offers different models.”

BIOM serves up diminished structure, cushioning and motion-restriction in various looks, outsoles and degrees of minimalism, culminating in the BIOM Zero model, a rather prototypical light, flexible, zero-drop shoe.

Troon North Golf Club head pro Jeff Brinegar says minimalism “changed my life.” Several years ago, he came down with a case of plantar fasciitis, the painful inflammation of the connective tissue of the bottom of the foot. A TRUE rep put him into the company’s Proto model and he’s been wearing TRUE shoes ever since, plantar fasciitis-free.

“This is not a whim. These shoes have been tested and proven,” he says with emphasis. “Your feet are allowed to function normally and you’re in a better position to play golf. Guys on Tour are changing to minimalist platforms, and that’s proof right there. … And they just feel great.”

Like any good teacher, he pauses and suggests a practical comparative highlighting one of the concepts.

“How do you do a push-up?” he asks. “You spread your fingers out wide for strength and stability. That’s the way the foot was designed. But we’ve been jamming them into these narrow, over-engineered shoes since the beginning of time.”

On the sales front, he says ECCO leads sales at Troon North, except for the days when TRUE comes out on top; they’re neck and neck and way out ahead of the third-place finisher.

Like ECCO, the big guns in the shoe game have been busy inserting minimalist offerings into their shoe lines: Nike’s Free-inspired TW ’13 and now ’14 models, and FootJoy’s M:PROJECT endeavor featuring lighter, more flexible, lower-profile shoes with lessened heel height and a roomier forefoot.

FootJoy is touting M:PROJECT as the choice for the typical “minimalist” target audience seeking enhanced feel and flexibility, and in an interesting positioning move, is pitching it as an aspirational shoe for those wishing to work on balance and tempo. In other words, if you’re a player with a lot of moving parts, you might want to look elsewhere in the product line, the company’s promotional material suggests.

Adidas, of course, began life as a sports shoe company, and every shoe in its current line offers some mix of enhanced flexibility, weight savings, lower profile, lessening drop and/or a wider last, from the __ber-light adizero through the minimalistic puremotion.

“Thirty years ago, you wouldn’t find athletes on the course, you’d find golfers,” explains Bill Price, vice president of footwear. “Now they’re all athletes who train hard and prioritize fitness. The swing from 30 years ago has changed and evolved, from a lateral swing to a rotational swing. Footwear needed to change to allow for this. … There was a big jump toward minimalism. A shoe that’s lower to the ground gives the athlete more and better feel. It also allows for more foot splay, which creates better stability. More minimalistic is a good thing.”

Given the construction, minimalist shoes tend to go from box to foot quite easily. Yet, as with any new tool, there’s an adjustment period.

Moore, whose brother Ryan won the 2012 Las Vegas tour event wearing TRUE shoes, advises: “When you transition to a barefoot platform, you’ll feel it. It’s not the knee, hip and back discomfort from a shoe that puts you in an unnatural position. This is muscle discomfort. You’re working muscles you haven’t used in a while; it’s understandable. Just gradually work into it. You’ll build strength, naturally.”

Does it come with 25 more off the tee? Well, that’s for you to find out. One thing for sure, today’s kicks look, feel and perform better than ever before.

One thought on “From The Ground Up”