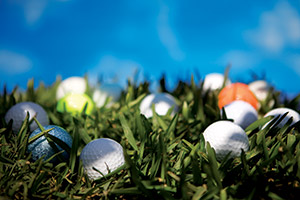 Even golf magazine editors sometimes need to see things for ourselves. Throughout the year, we’re inundated with countless “golf ball test results,” indicating the performance benefits of one ball versus another. We admit there are real differences between golf ball categories—we don’t dispute that. But we’re also clever enough to understand that no two golf ball tests are exactly alike. In fact, they’re all done under different conditions, with different clubs, swing speeds, launch conditions, weather types and a bunch of other variables that are hard to quantify.
_Ê
As editors responsible for keeping up on this stuff, once in awhile we want to see how a golf ball performs not on a launch monitor, but on an actual golf course. So we did the only logical thing there was to do: find a reason to get out of the office and play a round of golf. We wanted to test the differences in performance between three different types of golf balls over the course of 18 holes.
_Ê
Ryan chose to play a select group of multilayers, starting with a non-urethane three-piece ball, a three-piece urethane-covered ball and, finally, a four-piece urethane-covered ball. Charlie, on the other hand, went with a two-piece value ball, a non-urethane three-piece ball and a urethane three-piece ball. We had some overlap with the urethane three-piece, but nonetheless it was interesting to see how our results compared. Eschewing the launch monitor and any real scientific approach to our findings, here’s what we found.

The Value Ball ($18-$25/doz.)
Charlie: To be honest, I rarely play this kind of ball; I’m more inclined to hit a soft-cover, multi-layer premium ball. I typically find value balls (usually made of a two-piece construction) to be hard off the clubface and even harder around the green, but I was very surprised at how responsive this ball was. Regardless, it didn’t spin nearly as much around the green as I’m used to.

On one hole, I purposefully tried to get it to check up around the cup and it almost did. Its cover was soft (made from a soft ionomer), but not soft enough to generate the appropriate amount of spin. Would a Tour player put this kind of ball into play? No. But at a buck-fifty a ball, it’s something most amateurs probably should play. It’s economical, has a remarkably soft feel for a value ball, and I didn’t notice much difference in ballflight, launch or distance with my longer clubs.
_Ê
These balls were designed for players who, like me, don’t generate a swing speed that’s considered “Tour level” (above 112 mph). In playing this ball,_Ê I’ve learned that the key to more distance is to compress the firmest part of the ball as much as possible. Faster swingers can compress balls that have firm cores, which means they can use balls that have soft covers (that combo of soft cover/firm core is common). That type of ball allows them to hit the ball both far off the tee (firm core) and with spin from the fairway and around the green (soft cover). Most players just don’t swing hard enough to do that. Value “distance” balls like the one I tried have a firm cover and soft core, which puts the firm part of the ball right out front, making it easier to get more distance. You may lose some spin around the green, but the trade-off is the gain in yardage.
_Ê

The Value Three-Piece Multilayer ($25-$35/doz.)
Ryan: Value three-piece multilayers typically bill themselves as more durable counterparts to the more expensive multilayers. Also, they claim to reduce spin off the tee while retaining spin into the greens. Of the holes I played using a value three-piece ball, I immediately noticed the relatively high amount of spin I generated off the tee (despite expecting less). Not only did these balls have a high trajectory, but my slices sliced more and my hooks hooked more. From the fairway and even from light rough, these balls had plenty of spin, and I had no trouble holding the greens with middle and short irons.
_Ê
When it was time to hit a few wedge shots, I noticed a big difference. It was almost as if the spin mechanism was turned off; the ball just didn’t hold on the greens as much as I’m used to. There was some spin, of course, but not nearly as much as I had hoped. But for someone who doesn’t swing fast enough to generate a lot of spin anyway, this category may be the right choice.

Charlie: Ryan speaks for both of us on this one. The mid-range offering I hit didn’t spin very much around the green, but it felt better coming off the clubface on woods and irons than the value balls. For $7 more, I didn’t see any remarkable difference between the two, although I could argue these were slightly softer around the green. Like the value balls, these were very durable.

Premium Three-Piece Multilayer ($35-$40/doz.)
Ryan: Testing balls in this category was easy since this is the category most ball-fitting sessions claim I should use for my game. The biggest upgrade (in addition to price) over the value multilayer is the urethane cover, as each ball I tested in this category had one.

Off the tee with a driver, I noticed two things. Different balls in this category actually have different trajectories—some fly high, others fly low—and the written description on the box of balls was dead on as far as which balls were designed to do what._Ê Secondly, I noticed more distance off the tee as these balls flew on a flatter arc. With irons, the ball felt softer and like the value three-piece balls, they had plenty of spin to hold the greens. It was the pitch and chip shots, however, where I felt these balls performed the best. I think one of the top benefits today’s premium three-piece balls have is the responsiveness they produce around the greens. Although not as soft as balatas once were, these balls performed with what I’d call “optimal spin,” where the ball spins just enough to “drop and stop” onto the green with limited forward or backward roll._Ê That’s a handy benefit that means more to me than a few yards off the tee.

Charlie: I can’t say it surprised me that the premium balls had exceptional spin around the greens. What did surprise me, however, was a noticeable distance gain off the tee. It was like the ball reached an intermediate apex and then climbed an extra few yards. What’s really happening, however, is that it launches on a lower trajectory, spins less and gains distance in the process.

Even though I don’t have Tour-level swingspeed, I swing fast enough to reap the benefits of this category. For me, the value and mid-range balls tended to launch higher and spin more off the tee, so I lost a little distance. Like Ryan, the three-piece urethane-covered ball was a good choice for me, but I happen to prefer a ball with a bigger dimple pattern (less dimples). I tend to hit it pretty high, so anything I can do to lower my trajectory and hit a more penetrating tee shot helps.

Ryan & Charlie: Could we tell the difference in these balls versus the value multilayers? You bet. The key for you_Ê is to choose the right one, since we both noticed that no two premium multilayer balls are the same. This is also the category that’s best for both our games, which is why we could discern the differences in balls here better than we could in the other categories that we tested.

_Ê
Ultra-Premium Four-Piece Multilayer ($40+/doz.)
Ryan: The $40 and above category intrigued me. The balls I tried were_Ê four-piece multilayer balls—as opposed to the more common three-piece multilayer. Off the tee, this ball generally flew lower and with less spin than the regular premium ball. (However, I also tried one ultra-premium ball that had a slightly higher ballflight than all the balls in both the premium and ultra-premium categories, thus proving not all four-piece balls are alike.) When it came to irons and wedge shots around the green, I generally couldn’t tell the difference between these balls and the premium balls. Hmm….

Our Take
Ryan & Charlie: We were generally pleased to see that most golf balls actually live up to the marketing claims, and by that, we mean the claims they make for particular golfers. For example, Ryan has a faster than average swingspeed, which means he might actually lose distance using a value two-piece ball, since they’re made for players with slower swingspeeds. However, for another player with a slower swingspeed or a lower initial launch angle, they may actually be the right choice. (In this experiment, the three-piece urethane cover category was the best for both of us.)
_Ê
We also learned that by observing the way golf balls performed when hit by different golfers, we could conclude that not one type or category of golf balls will perform the same for a variety of golfers. Also, depending on your swing characteristics, certain balls will perform better than others. Dimple patterns, compression rates, cover thicknesses, etc., all play a part in how a ball performs, making it critical that you determine what type of ball is right for you.
_Ê
We recommend that everyone go through a custom ballfitting to narrow down the right category. Once you do that, you can choose between three or four different models (that’s a heckuva lot easier—and cheaper—than trying the near endless number of balls at your local golf shop). And by the way, don’t turn to your buddies for advice or base your ball choices solely on what the pros play. How a particular model performs for someone else may be completely different than how that model performs for you.

EXTRA!
Find Your Sphere
Curious as to what balls we tried? While we make no claims to be scientific in our findings, we’ll at least let you know which balls we tested and leave it up to you to decipher which balls fall into which categories. Let’s see if you can tell which ones Charlie and Ryan tried._Ê Email us at editors@golftipsmag.com with feedback from your own tests!