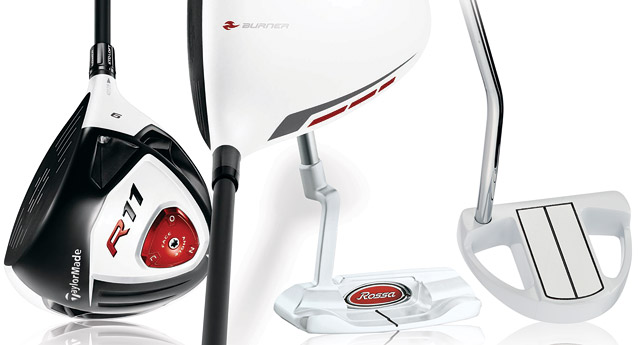 NEW COMPOSITES. Finding new lightweight-yet-strong materials that improve product performance for golf clubs has long been a goal of manufacturers. Callaway‘s new Diablo Octane driver features one such material, a “Forged Composite” that the company codeveloped with Lamborghini. The material is comprised of “turbostratic” carbon fibers. For Lamborghini cars, this translates to a favorable power-to-weight ratio and acceleration capability. For Callaway’s Diablo Octane–where the material makes up the crown of the otherwise titanium clubhead–it means a greater transfer of power at impact, plus more accurate trajectories.

BETTER WEIGHT MANAGEMENT. In 2011, you’re hearing lots about lightweight clubs and speed–the lighter the club, the more clubhead speed it generates and the farther the ball flies. Cleveland leads the way here, with its new Launcher Ultralite drivers that come in three weight schemes that match your swing and flight preference, while bearing a lightweight shaft at the right length for that particular swing. Each shaft is matched to a specific clubhead profile, and the use of extremely lightweight grips also help you pick up some clubhead speed. The company challenges you to find the Right Weight for your swing at any of its 2,000 fitting locations nationwide.

DRIVER ADJUSTABILITY. By now you’ve seen, hit or even purchased one of the many adjustable drivers on the market. This year, adjustability goes a step further. With its 910D2 and 910D3 drivers, Titleist gives you the ability to independently adjust loft and lie–without affecting the other. On previous models from all brands, you essentially changed both at once by adjusting just one. TaylorMade has added yet another form of adjustability, in its R11 driver. As in models past, you can still adjust the hosel to tune ballflight, as well as move the weights around. However, this model has a three-setting adjustable disc on the soleplate that allows you to effectively open and close the clubface, as it rests flat on the ground. And that all adds up to you having one club that can be set 48 different ways.

PREMIUM PUTTERS. There’s no shortage of upscale putters on the market this year. Odyssey leads the way with a pair of new models in its White Ice line–the 2-Ball Blade Lined and the D.A.R.T. Blade. Scotty Cameron by Titleist added several new models, including the Studio Select Laguna 2 and the honey-dipped California Hollywood. Never Compromise expanded its offerings with an entire new series, coined the Gambler. Each of the four Gambler putters feature different Vegas-themed artwork machined into the sole of each model. You’ll also notice an emphasis on putter fitting this year, as more companies want you to get a model that not only fits your loft, lie and length requirements, but also meets your specific tastes in grips, aesthetics and head shape.

ONSLAUGHT OF FAIRWAY WOODS. You’re seeing loads of new fairway woods this year–just when you thought they might completely fade away to make way for the hybrids of the past few years. Tour Edge’s Exotics multimetal Trilogy fairway woods are all about distance, stability and improved turf interaction. Titleist’s 910F will wow golfers, as will the special 910Fd version, which is a deep-faced, low-lofted, larger-headed 3-wood that doubles as an easy-to-hit driver (thus the “d” in its name). Cleveland’s and Adams’ latest woods are ultralightweight, which means you can pick up clubhead speed and thus distance on your shots.

WEDGES WITH SOFTER-EDGED GROOVES. 2010 was the last year wedge makers could perfect their products with aggressive grooves that help you get a little extra suck-back spin–thanks to a USGA ruling. But all of the new wedges with soft-edged grooves are not noticeably any more difficult to hit–just ask any PGA Tour pro who was forced to use them the past year. And if the pros couldn’t discern the difference, odds are you won’t either. Mizuno‘s new MP T-11, Titleist’s TVD, Cleveland’s CG16 and PING’s Tour S highlight a slew of new soft-edged models from major manufacturers hitting the market.

HYBRIDS REPLACING 5- AND 6-IRONS IN IRONS SETS. Ever since PING invented cavity-back irons, it has been considered a trendsetter. So golf circles recently took notice when seeing that PING’s new K15 Iron/Hybrid set offers stainless-steel hybrids in 3H, 4H, 5H and 6H hybrid clubs. In fact, the K15 irons start at the 5-iron. While there have been several all-hybrid sets out in the past, this blended set may truly raise the bar. Likewise, Cobra‘s new S3 Max Iron-Hybrid set also offers hybrids in the 3- through 6-clubs.

PRICEY OUTERWEAR THAT WILL LAST FOREVER. Nike calls its new N-Destrukt product utilitarian. adidas Golf armed Bandon Dunes caddies with a customized model because it’ll conquer any weather condition. However, you can get the consumer version–although they don’t come cheap. Nike’s will run $650, and adidas’ about $500. Both models include jacket and pants.