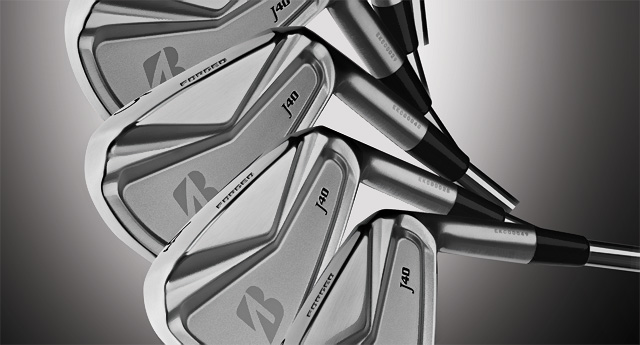 Right now, when you think of the Bridgestone brand as it pertains to golf, odds are you think of the hot, new B330 and eSeries golf balls, both of which have become pretty popular these days. But what you might not realize is that Bridgestone has produced a couple sets of beautiful forged irons that have quietly flown under the radar. Well, that is, until now”

We tried both sets of new Bridgestone irons: The J40 Cavity Backs (CB) and the J40 Dual Pocket Cavity (PC). Starting with the CBs, each iron oozes the look and feel that Tour professionals are looking for. From address, the thin topline, short heel-to-toe profile and raised face design look like an iron poised for real shotshaping. But flip it over and you’ll see the CBs are actually a modified cavity back, with a perimeter-weighted design and added weight placed behind the sweet spot. This does two things that a standard blade doesn’t. It enhances forgiveness, which helps golfers hit longer shots, all while retaining the maneuverability that comes from a traditional shape. The J40 Dual PCs have a longer profile from heel to toe and two pocket cavities behind the face, both to help increase the forgiveness factor. Both irons are forged, both have sole designs for versatility (the CBs with slightly more), and both come with Project X steel shafts. Oh, and as for looks? Just look at the photos. They’re sweet from head to toe.

FEEL &PERFORMANCE:
As much as we wish we could keep it a secret, the J40 CBs and PCs are much, much more forgiving and longer than you might expect. Yes, they’re forged and feel soft and buttery as you’d expect, but they both also yield impressive doses of forgiveness and distance, even on slightly off-center hits. In the case of the CBs, we felt as though each iron was up to one full club longer than comparable forged irons we’ve tried lately. We don’t doubt the powerful Project X has something to do with that, but shots fired with these irons bore through the air with a Tour-like trajectory. In regards to the PCs, they too were long, and a tad more forgiving with the middle and longer irons. That said, it’s important to consider these irons were tested by single-digit handicappers, one of whom already plays forged irons. So don’t think these irons are any sort of game-improvement irons. They’re not. They’re scoring irons, with game-improvement qualities built right in. The PCs had a higher trajectory (albeit only slightly) than the CBs, and the longer irons (4-6) were more forgiving.

EVALUATION:
Both irons, the CBs and the PCs, exceeded our expectations in terms of forgiveness and distance. In terms of versatility, we didn’t have problems hitting different types of shots either. We did feel that they benefitted stronger players, possibly due to the Tour-friendly Project X shafts, which combined, might make it more difficult for an average player to hit higher shots. Nonetheless, with the right iron frequency (flex), that could make a difference.

We liked both irons a lot, and couldn’t decide on which we preferred. Actually, we cheated on occasion, mixing the longer irons of the PCs with the middle and short-iron CBs, resulting in a set that had the best of both worlds. And for you forged-irons junkies (like us) who want either an iron that’s long and forgiving that’s also forged (the PCs), or a forged iron that’s also long and forgiving (the CBs), you can’t go wrong with these two options. Well done, Bridgestone.