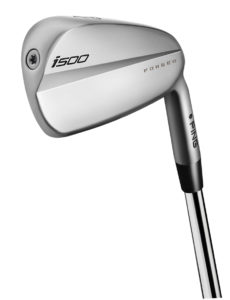 If your 10-handicap swing is anything like mine (golf gods forbid!), you might be stuck in that annoying limbo between a game improvement club and a less forgiving, forged player’s club. Seems like the white-coated boys at Ping’s R&D department have been keeping us in mind, as their new i500 irons offer distance and precision in one beautifully compact package.

Using thinner, high-strength “maraging” steel is part of the equation — its flexible face bends considerably more at impact than a regulation cast iron. The resultant launch is faster and higher, leading to increased distance. That isn’t easy to achieve in a smaller club, but Ping has somehow managed to combine hollow-body construction without dampening filler or backing materials. That’s what gives the i500s their considerable pop.

The higher launch angle is especially impressive in the longer iron lengths. According to Ping, these irons will launch up to 10 percent higher than the competition, creating steeper landing angles and softer landings. Many competitive clubs can claim to go as far, but they may be merely tweaking the numbers on the sole of the club. Ping isn’t into such deception, preferring less spin and higher launch to achieve the same result. And yes, they look classically handsome, as a minimally offset forged iron ought to!

P.S., even though these irons are closer to being players’ clubs, they may not be quite as workable as a traditional blade. That’s okay by me — I’ll take straight and long over hooks and slices any day. Ping’s i500s are also available in what the company calls PowerSpec and RetroSpec lofts. The former are 1 to 1.5 degrees stronger and the latter are weaker by the same percentage. Lots of shaft options are available with no upcharge as well: Dynamic Gold, Nippon and KBS. Easily one of Ping’s most innovative irons in years.

www.ping.com | Check the price on Amazon!