Editor’s Note: Now that former U.S. Amateur champion and Top 20 PGA Tour player Bryson DeChambeau has played his way onto the 2018 Ryder Cup team, his well-documented success with Cobra Golf’s one length irons will get plenty of fresh exposure in golf media. That’s why we’ve decided to revisit the following feature from 2017 in which Golf Tips contributor Ken Van Vechten gets fitted for one length irons — and comes away with some interesting conclusions.

With every club company chasing the grail of long, longer, longest, Cobra has veered off on an alternate path toward that end. Though not the first commercial venture to try, the company’s F7 ONE one length irons – in both cast and forged – marks an outside-the-box move for one of the game’s bigger names.

“One length is for any player seeking a simplified way of swinging the golf club,” explains Mike Hearne, custom fitting coordinator for Cobra. “One length offers fewer variables – same ball position, same distance from the ball. By eliminating these variables it allows the golfer to swing in a more consistent posture, which leads to more centered strikes and better mis-hits.”

Cobra took a cue from a common lament – “Why can’t all my irons be like my 7?” – outfitting each KING F7 ONE and KING Forged ONE iron with a 7-iron-length shaft. If this sounds familiar, it’s a set-up strategy that PGA Tour player and former NCAA and U.S. Amateur champion Bryson DeChambeau has employed for a number of years. This strategy led him to several Tour wins in 2018, into serious contention for the FedEx Cup (ultimately won by Justin Rose), and a berth on Ryder Cup Team U.S.A. for 2018.

So, back to my initial trepidation: A 4-iron and a wedge outfitted with a mid-iron shaft: Sure, why not, ain’t nothing bad gonna come of that.

ONE LENGTH IRONS AND YARDAGE SPACING

The obvious head-scratcher is gapping, the sequential yardage spacing as we go from one end of the bag to the other. That was my concern, assuming prior to testing – as is a common perception in the market – I’d have an assem-blage of short longs and long shorts.

Distance is the result of a number of factors, working in concert: Shaft length and weight (effectively swing speed), launch angle and spin rates; how the shaft, clubhead and clubface react to the strike; and, so importantly, where the hell we strike the ball on the clubface. All else equal, longer clubs can be moved at a higher rate of speed. What they might not do is produce longer shots. It’s all about how energy is transferred to the ball via the club courtesy of the swing. That is (partially) why a slower-swinging player can hit a 5-wood farther than a standard-lofted driver. Flip it around, and 9-iron with a longer shaft is likely to produce juiced up results.

“I don’t think the advertising is wrong,” says Nick Sherburne, founder of Club Champion, an independent, nationwide network of any-and-all-brands fitting studios, of Cobra’s intent. “One swing plane, one swing, shorter long irons for better control; those are the key selling points. But there are gotchas. There might be gapping issues for some customers, a dual spacing problem on either side [of the mid-irons]. And you have to adapt, there is a learning curve, and for some there won’t be instant success.”

Cobra acknowledges there could be an adjustment period, and that you can’t ignore the basic tenets of science. But it believes in the formula that a shorter-shafted long-iron struck more consistently – “on the screws,” something most of us do far more often at one end of the bag than the other – by a properly engineered head won’t lead to the ball flight equivalent of a wounded quail. To make sure short irons still behave like they should, Cobra had to tinker to make sure when an 8-iron went down range it did so within reason. (Cobra still has a lineup of F7s and other models in standard progression; this is an option, not a my way/highway mandate.)

After a recent session with Cobra at its SoCal HQ, I’m sold, to a large extent. The testing protocol involves x swings with 5-, 7- and 9-irons – the cast version for me – with the usual fitting-session tweaks of lie angle, shaft and the like, and I hit them alongside my gamers, Callaway Apex CF 16s. I play ProjectX PXi 6.0 (stiff) shafts; the Cobras were outfitted with KBS Tour FLT stiff shafts.

Launch and spin rates varied, but all were within optimal parameters. Sidespin was draw-biased, on par for the two longest clubs in each set but significantly higher with the Cobra 9-iron (as was the launch angle). Dispersion, however, was tighter with the Cobras, due in large measure to flattening, over the course of the fitting process, the lie angle two degrees from standard, eliminating heel-grab.  (And that serves as a useful reminder that golf swings, even clubs, are not static, unchanging things. When fitted for my Callaways last year — as outlined in a previous article here — the dispersion was so tight that at times you could put a blanket over my shots. I’ve noticed more leftward misses of late so it is time to re-check my needs relative to lie angle.)

THE ONE LENGTH IRONS: THE NUMBERS 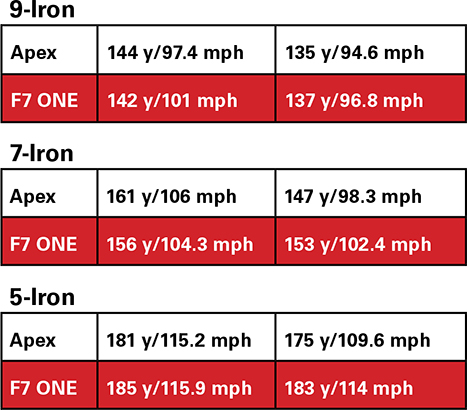 The takeaway in all of this is I gain yardage, on average if not every shot, with the same-length Cobras. The most striking result is the consistency, notably with the longest iron.

Loft differential between my 5-iron and the F7 is inconsequential – one degree stronger for the latter. The F7 is also nearly an inch shorter, yet ball speed was up across the board on lower swing speed, and there was far less variability between shots – total yardage and ball speed – best to worst. Callaway has one of the hottest faces in the game, something I see when the planets and I align and I launch a 195-yard 5-iron, but that day, under those testing conditions, the shorter club was giving me a more efficient strike, a fact that also was born out by the impact marks on the clubfaces, as well.

At the other extreme, the 7-iron-shafted 9-iron, despite higher absolute and average ball speed, didn’t produce PED-like yardages.

“Head shapes and lofts are identical, in ONE length vs. variable length,” Hearne explains. “The big difference is the headweight and the CG [center of gravity]/inertia properties of the heads. We add weight to the lower-number irons, to increase ball speed, and they have a lower CG and higher inertia in ONE length. Then we do the opposite in the higher-number irons, taking weight out and raising the CG.”

On the mental side of things, I don’t put a ton of thought into the processes that occur between pulling a club and figuring out if I was goat or GOAT with that specific shot. Good or bad, that’s me. I’m not so fidgety that looking down and seeing a long iron sitting rather near the middle of my stance is going to throw me off, so I didn’t feel adjustment angst. I have friends who in that situation would reach for the Zoloft.

None of this is end-all science or a statistically significant data set applicable to the general populace, and it certainly isn’t religious doctrine cast down from on high; it’s one avid recreational player’s experience. I found setting up across the three same-length clubs to be automatic, refreshingly uniform. However, it wasn’t exactly a burden setting up to my clubs. Your mileage may vary. If I had to choose a side, why not have a single stance and posture if you are getting the results you need? And that, ultimately, is proven over time, in the course of play.

It’s golf, it’s personal – one size does not fit all. But ONE will fit some just fine.