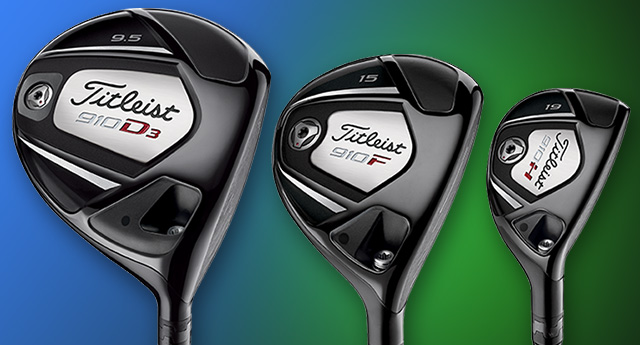 Late last year, Titleist introduced its next generation of woods, called the 910 series. These three offerings–driver, 3-wood and hybrid–continue the company’s tradition of making Tour-caliber golf clubs for better golfers.

Quite possibly the golf industry’s most sophisticated off-the-rack clubs, these sleek all-black clubs feature what’s called a SureFit adjustable hosel and come with a wide variety of pre-mium stock shafts. If you’re a player, you’ve got to try them.

Titleist 910D3 Driver
First Impression: If there’s one thing Titleist consistently does across the board, it’s make top-tier golf equipment designed primarily for better players. And the company doesn’t hide behind that truism, they embrace it by essentially claiming that if their equipment is suited properly for a Tour player, it’s good enough for weekend warriors to use, as well. We were lucky enough to try one of the new pear-shaped 445cc 910D3 drivers (the other offering, the D2, has a more modern, round-shaped profile).

Now, before you read any further, it’s important to remember that we’re not Tour players and we don’t play as often as you might think. Hence, we were a bit intimidated by what we were about to test.

At first glance, the all-black cosmetics had a stealthy appearance that looked fast and sleek. Second, the 9.5_¡ 910D3 came with a SureFit, dual-angle adjustable hosel that could be adjusted to fine-tune a player’s launch angle and ballflight characteristics (higher/lower, fade/draw). Those were two big design pluses (and confidence boosts), and we hadn’t even put the club in play yet. Next, the shaft we tried was a “stock” Mitsubishi Rayon Kai’li 65R. The driver measured 45 inches and had a standard velvet-style grip.

Performance: In our trial, the 910D3 not only was playable, but has turned out to be one of the top drivers we’ve tried in 2011. The ball launched with the type of ballflight that’s to be expected from a Titleist driver–no ballooning or excessively high trajectories. Rather the ball flew with a mid to lower ballflight that better players tend to prefer. When we hit it squarely, it really flew a long way. At impact, the ball had a muted sound but a responsive feel that, again, better players will like.

In testing the 910D3, we learned that while custom-fitting the SureFit dual-angle hosel can certainly help you fine-tune your game, it won’t alleviate your problems if you’re playing with the wrong shaft. In the case of the driver we tried, we found the best results to come from faster swing speeds–and we tried an R-flex model. In other words, because of it’s Tour-friendly performance attributes, if you swing slower and want to reap the rewards of this driver, you might consider adding a degree or two more loft, and/or making sure you have the correct flex profile for your game.
All in all, we felt that it was an awesome driver and produced solid results.

Titleist 910F
First Impression: Like the 910 drivers, Titleist’s new fairway woods are sleek and pleasing to look at. Whether looking down on it at address or pulling it out of the bag, the sleek-looking woods make you feel like you’re playing a round of golf with Johnny Cash.

Performance: The fairway woods also were built for the better player, so they’ll be a challenge for higher-handicappers to make consistently solid contact. When we hit the 910F “on the screws,” it yielded shots that pierced through the air on a penetrating yet high trajectory–whether teed up or on the turf. These results largely come from the club’s thinner crown technology. Titleist engineers pushed weight lower and farther back in the clubhead. As for acoustics, we noticed that solid strikes produced a muted sound that better players prefer. There was no high-pitched “ting” or hollow sound that game-improvement clubs produce.

Technology: While Titleist has built players’ clubs for years, with the introduction of the 910 series, they’ve raised the bar for adjustability. Most impressively, this new series allows golfers to change the club’s loft and lie angles independent of one another, all while offering numerous premium stock shafts of varying flexes and weights.

As we like to regularly remind readers, the best way to find the club that’s right for you is to get fitted, and Titleist has covered all the bases with these new clubs. And with the right shaft, you can personalize the clubs even more.
Not personal enough? Consider that all woods come with a precision bezel weight directly in line with the club’s CG. An optional precision weight kit is available with 2g, 5g, 7g, 9g and 12g weights to adjust swing weight and feel with different shafts.

Titleist 910H
First Impression: The most forgiving offering in the 910 series, the 910H hybrid comes in four loft options and the same black color scheme of its bigger, longer brethren.

Performance: For less precise golfers, the 910H is the best option if you want to put one of these clubs in your bag. The trajectory, which you can adjust, is mid to high, and needless to say, the ball travels a mile. A mile. Performs like a champ out of any lie.

Technology: Like the drivers and fairway woods, the 910H affords users the chance to adjust their loft and lie independently of one another for optimal ballflight. (There are 16 loft/lie combinations.) Its progressive head sizes and CG locations create the optimum trajectory and spin for each loft.

For more information on all Titleist products, visit www.titleist.com.

One thought on “We Tried It”