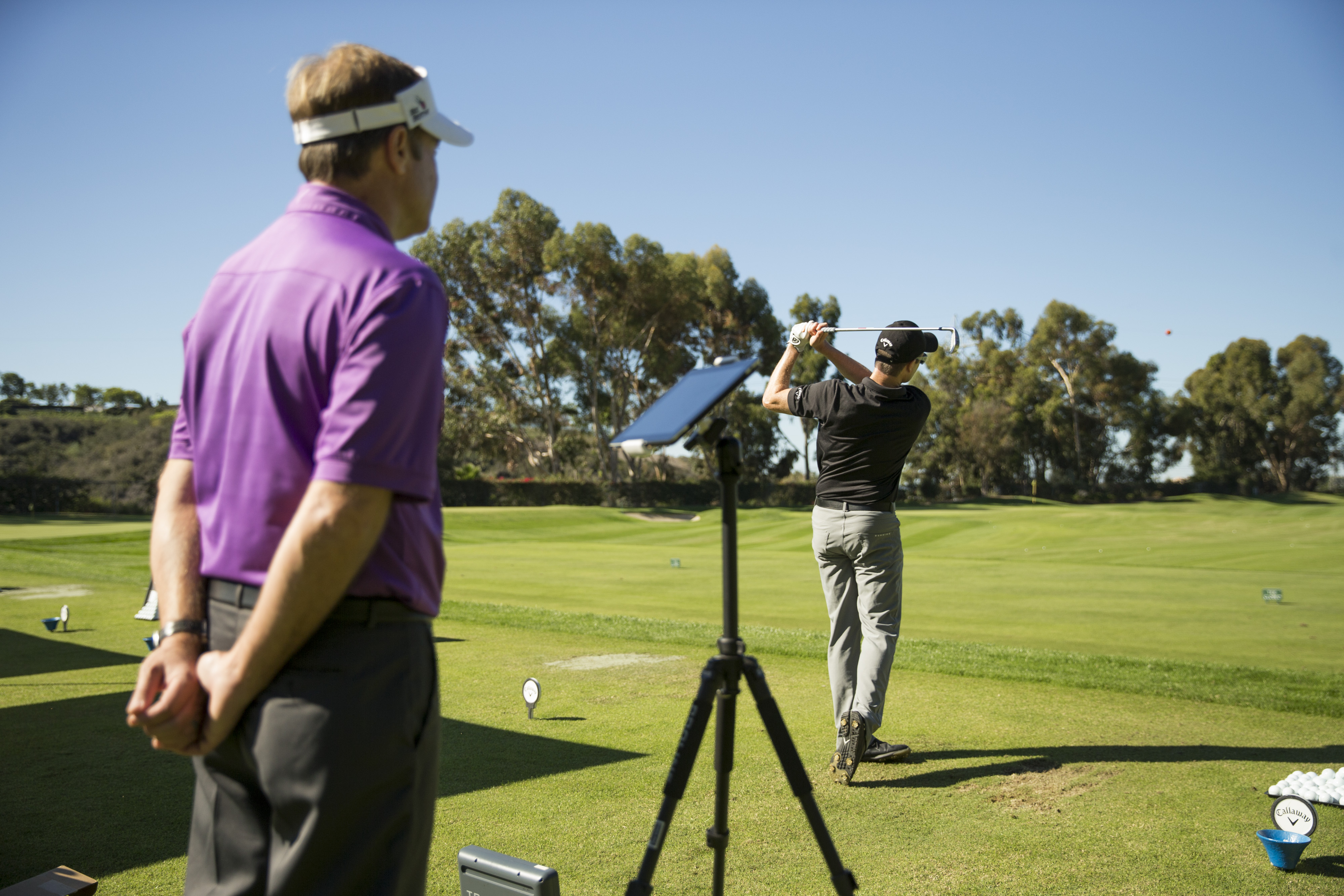 The Mercedes is paid for. The check is in the mail. There are lies, and then there are dastardly evil prevarications: Me? Oh, I hit my 6-iron 210, 215, a bit farther if I really juice it. Don’t be that guy. I spent an afternoon recently at the Callaway Golf Mothership in Carlsbad, California, exploring myths and truths in my gear and golf swing. I’ve been playing the 2016 Apex CF16 irons since late last year and thought I’d take ‘em back to the dealership, so to say, for a 1,000-bogey checkup. (Callaway has nearly three-dozen Performance Centers and Fitting Studios across the country.) 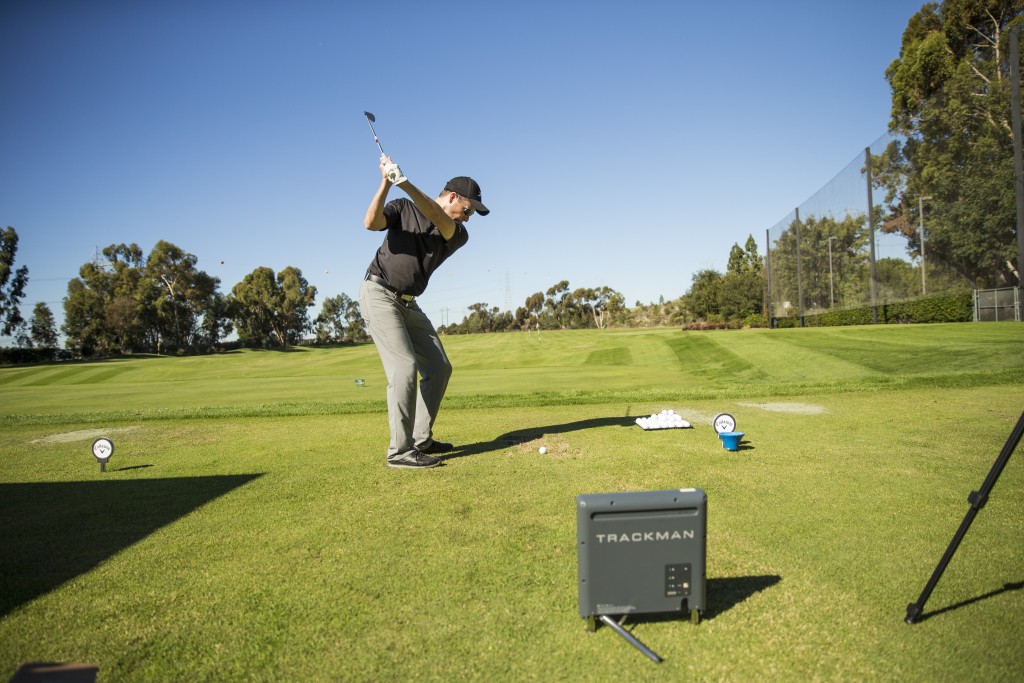 My gamers are standard — lie, length, stock True Temper XP95 (95g) stiff shafts — CF16s. My 7-iron stats — the iron Callaway uses for testing — place me toward the top of the skew and within Callaway’s preferred launch windows of 4600-5900 rpm of backspin at an angle of 15-20 degrees for an 80-90 mph swinger; please refer to the first line in the graph below. Those shots also often land 20+ yards left of center — a fact borne out in real-life green-grass play — because I generate more than 1,000 rpm of negative or right-to-left (draw) spin off an in-to-out path.

Under Callaway’s two-camera, 10,000-frame-per-second diagnostic system, the culprit is revealed, that my inside-at-impact route ranges from a tight workable draw-inducer — say a degree or so — to a problematic six- or seven-degree hook-maker. Path plus spin plus face angle equals ball flight (curvature). So of course if I don’t get the face closing down just right I can miss the other way with a titanic block. (I also de-loft slightly at impact, which only such an analysis could reveal as many a visual-only instructor has tried to cure me of presumed flipping at impact.)

After getting baseline data with my everyday-ers, the fitter moved me through slightly heavier, “beefier” shafts. Regardless shaft, launch, spin and ball speed danced around only slightly, and my shots all flew 160-some yards and rolled out to the 170s. Lines two and three of the chart denote the results using stiff-flex KBS Tour (120g) and True Temper Project X PXi (112g) shafts. The excessive draw/hook spin dropped slightly with the distance-adding KBS and plummeted nearly in half with the Project X. My misses moved from off the green to left edge of the green to yards outside the cup.

Before the numbers were revealed to me (I wasn’t shown the data during the comparisons, on purpose) the fitter asked which shaft I preferred. I chose the Project X owing to better sensing where the clubhead was through the swing and it simply feeling more solid, notably at impact. More weight and lower torque were the physical attributes at play, better standing up to my allegro-paced action and molto transition (103 mph driver speed with something between a half and three-quarter backswing). Yet golf also is played between the ears and the confidence I had in that (actually either) shaft had me swinging, not subconsciously thinking about errantry and potentially needed manipulations along the way. Again, I also generate more ball speed with the heavier shafts. Proximity certainly won out over the handful off additional yards provided by the KBS.

Some Numbers Do Lie

At the end we experimented with slightly longer shafts and discussed irons set more upright; based on static measurements I should use clubs a half-inch longer than standard and two degrees up. Should. Intuitively I knew these weren’t workable solutions as I’d played several previous sets of irons long/up and over time worked myself back to standard simply as the result of playing, hitting balls and gauging the results; nice to see some method behind the madness.

As the last entry in the chart shows, my worst results came with the stock XP95 at a half-inch longer than standard. Swing speed was slightly better than the standard length XP95 as is expected from a longer shaft, but my contact suffered as longer clubs exacerbate my natural tendency of struggling with maintaining posture so the important results lagged, and I still hooked it like mad. Going upright was dismissed because that would only exacerbate my right-to-left ball flight.

For one thing, lighter and longer don’t always lead to getting farther down range. And swings are dynamic; they aren’t just the product of a physical measurement on paper. The best bit of advice I can give you came from Callaway Club Specialist John Mlynarski IV, who conducted my fitting:

“This is all player-dependent. Just because you might measure to it or you like the look of something or you played it in the past doesn’t necessarily mean that you’ll have a winner on your hands now. People change, swings change, technology changes. You have to come in with an open mind.  I can’t stress that enough. If you think you must have something specific that can be limiting as there are so many other things going into [fitting and club selection]. You have to let the numbers and your feel guide the way.”

It’s called honesty with yourself. The fitter is going to know instantly that that braggadocio 323-yard smash you’re talking about incessantly could only happen at altitude, downhill and downwind, to a concrete fairway. And the thing is, he or she doesn’t care about any of our delusions. Some of the best players in the world have been through the shop, and some of the worst, and most of us are somewhere between. The fitter just wants you to head out the door with the stuff that works best.

Leave the lies on the course.