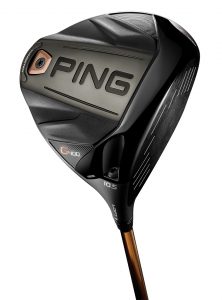 Ping’s fastest and most forgiving driver to date and an iron that delivers tour-level distance and ball flight highlight the new G400 Series. The full line of custom-fit, custom-built drivers, irons, fairway woods, hybrids and crossovers is engineered to help golfers lower their scores and increase their enjoyment of the game. The new equipment is available for pre-order and custom fitting at authorized Ping golf shops around the world.

“The G400 driver is a prime example of how our engineering team looks at every single detail of a club to ensure we are optimizing each design variable so golfers can improve performance,” said John A. Solheim, Ping Chairman & CEO. “In this case, we’ve gone slightly smaller in volume (445cc) to improve aerodynamics for faster clubhead speeds while actually raising the MOI higher than any previous Ping driver. We also employed a thinner, forged face to deliver increased ball speeds. This commitment to performance enabled impressive distance gains and tighter dispersion, the ultimate driving combination. We’ve also engineered an incredibly pleasing sound in the driver through computer simulation that will turn heads on the tee box when golfers get it in their hands. It even has a shaft that changes color at address to improve the player’s focus.”

Ping’s tour staff, including Lee Westwood, Tyrrell Hatton, Mackenzie Hughes, David Lingmerth and Daniel Summerhays, has been quick to switch to the new G400 driver with more than 70 currently in play around the world.

“We’ve never seen faster conversion to a new product than we did at last month’s U.S. Open with 13 drivers in play the first week it was available,” Solheim added. “The players immediately loved the look of the driver and became enamored with the powerful sound and feel. At the end of the week, the statistics proved that both the longest and most accurate players off the tee at the U.S. Open relied on a G400 driver.”

The unique forging and patented heat-treatment process of the T9S+ face powers a thinner, hotter impact area that is precision machined to elevate ball speed across the entire face for 16 percent more flexing and when paired with the aerodynamic gains, results in ball-speed gains of nearly 2 mph. By making the face 6 percent thinner and 9 percent lighter than its predecessor, extra weight was placed strategically to tighten dispersion even further through higher MOI. The forged face was also instrumental in producing the powerful feel of the driver.

The G400 driver’s high-density tungsten back weight and Dragonfly Technology help bring the combined MOI (heel/toe and high/low) over 9,000 gram cm2 for the first time and position the CG lower and farther back than any current driver on the market – making it the most forgiving driver in golf. In testing, the G400 outperformed the leading drivers in the marketplace, most notably when comparing dispersion results.

The streamlined shaping harmonizes with new, bolder turbulators and Vortec Technology to reduce drag by 40 percent mid-downswing and 15 percent overall to increase clubhead speed. The Dragonfly crown technology extends to the skirt section on the sole, providing additional weight savings and creating an “infinity edge” effect that adds to the inspiring look at address.

Extensive research and computer simulation coupled with music theory allowed the engineers to design internal architecture that fine-tuned the frequencies to produce a deeper, more muted sound. One tour professional compared it to “the satisfaction of puring a persimmon driver with the modern technology of the G400.”

Adding to the appeal of the G400 driver is the innovative paint-shifting paint technology of the Alta CB shaft. This premium copper shaft paint transitions to nearly black to reduce distractions as golfers address the ball. The counter-balanced design of the Alta CB allows for more mass in the head to increase energy transfer.

Three head options are available to match a G400 driver to a golfer’s desired ball flight. The standard version is engineered to fit most golfers. The SFT (Straight Flight) is designed to correct a left-to-right ball flight (for right-handed golfers) and features heel-side tungsten weighting and a lighter swing weight to help square the face. The LST (Low Spin) version positions the tungsten weight closer to the face to reduce spin approximately 300 rpm for a stronger ball flight. 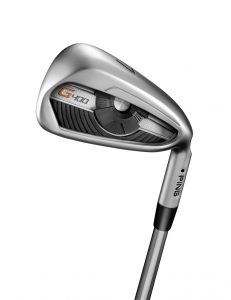 The new G400 iron is engineered to give golfers tour-level distance and towering height combined with the forgiveness and control they need to hit more greens. Its COR-Eye Technology combines with a new top rail undercut to increase face flexing in a catapult-like fashion for faster ball speeds that launch shots higher and farther with low spin for a strong flight. A unique heat-treating process produces Hyper 17-4 stainless steel, which makes the face 40 percent stronger than traditional 17-4 stainless steel and allows for a thinner face and 18 percent more face flexing.

“The G400 iron delivers phenomenal performance,” said John K. Solheim. “We like to call it our ‘game enjoyment’ iron because it’s so much fun to play. It provides tour-level performance while being very easy to hit and extremely forgiving with an amazing feel. Some golfers are seeing distance improvements as much as 15 yards, yet it is launching much higher and landing softer to give them more control. One of our tour players said it best during testing: ‘This G400 7-iron has turned into my 6-iron but in an 8-iron window.’ He got it exactly right. Golfers can expect one less club to the green with the height of two less clubs. That’s a powerful combination.”

A composite back-cavity badge made of aluminum and elastomer provides an enriched impact response that creates a powerful sound and feel. The Hydropearl Chrome finish reduces friction to improve turf interaction while giving it a premium look.

To maximize distance in the fairway woods and hybrids, Ping has employed C300 maraging steel as the face material. One of the strongest alloys in the world, maraging steel is commonly used in the aerospace industry, where strength and flexibility are necessities. It’s those properties that also make it an ideal face material to deliver more flexing for faster ball speeds that launch shots farther and higher.

“Our main goal in the G400 fairway woods and hybrids was to introduce significant distance gains while maintaining other performance benefits such as forgiveness and the ability to launch the ball easily,” said John A. Solheim. “With maraging steel, we have a material that allows us to go extremely thin with the face to give us the faster ball-speed gains we’re seeking for more distance and higher launch. The results have been amazing as we’re seeing face flexing equal to the thickness of the face.”

The G400 fairway wood has expanded fitting options with the addition of a 9-wood and three SFT (Straight Flight) choices (3, 5, 7) to help golfers bring their shots back on line. The Stretch 3-wood is also available as a high-performance option off the tee to deliver distance and accuracy or when going for par-5s in two.

Progressive CG locations in the G400 hybrid offer versatility in helPing golfers properly gap their sets. The 2- and 3-hybrids are engineered with a CG more toe side to minimize a left bias while the 4-, 5-, and 6-hybrids are designed help golfers launch the ball higher with added forgiveness.

The second generation of the crossover, which combines the precision and control of an iron with the ball speed and forgiveness of a hybrid, has been improved to make it a versatile option for golfers of all skill levels. It also relies on a maraging steel face, which improves the sound and delivers higher launch, producing 30 percent more stopPing power. The addition of a 20-gram tungsten toe weight increases forgiveness, resulting in 17 percent tighter dispersion. The turf interaction is greatly improved with a thinner sole and Hydropearl Chrome finish, which reduces friction 40 percent.

The popular Golf Pride Tour Velvet grip (irons, hybrids and crossovers) and Tour Velvet 360 (driver and fairway woods) are the stock grips on the G400 Series and are offered in six color-coded sizes. The Tour Velvet Cord is available for an upcharge.