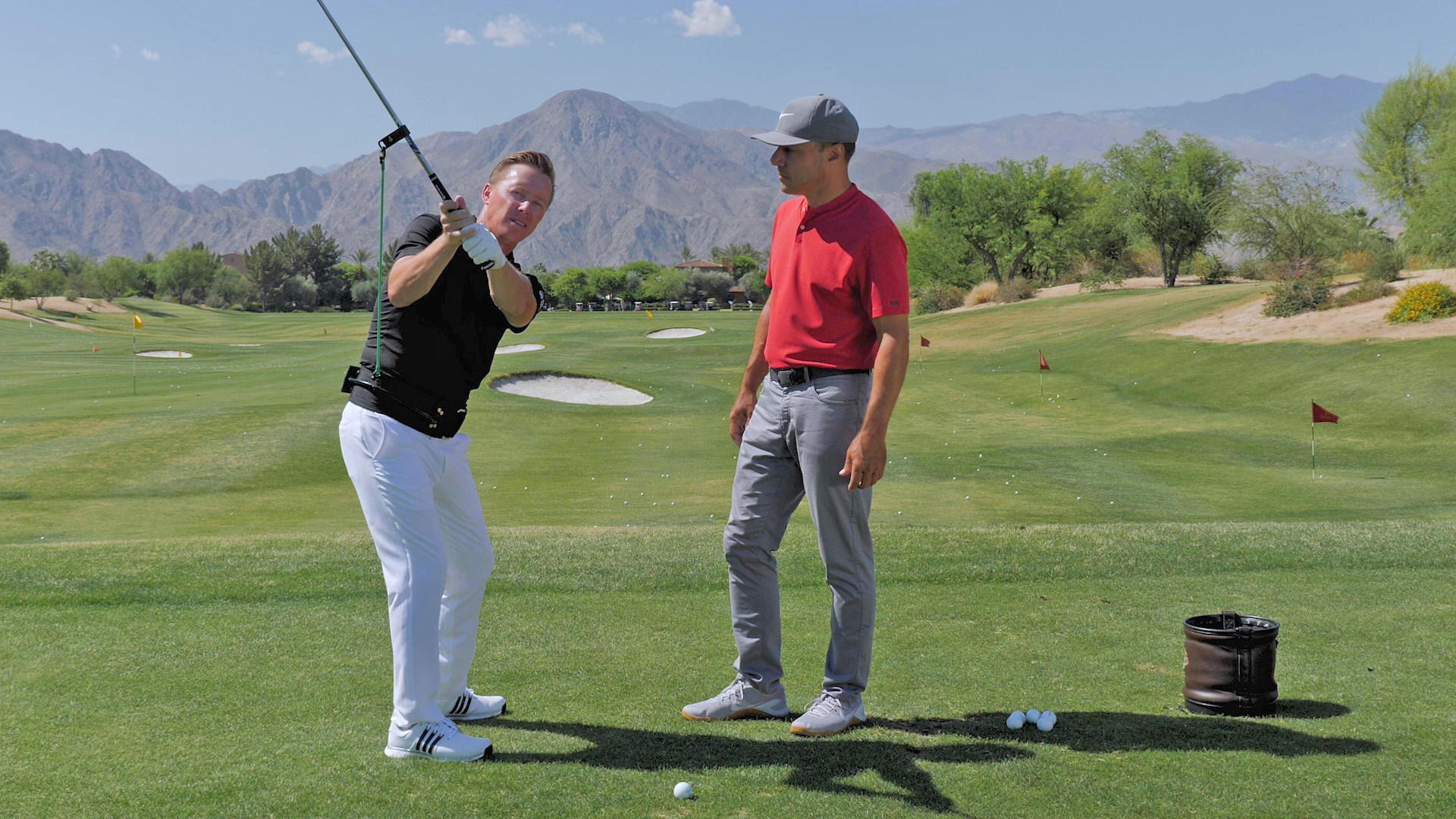 Two guys with serious cred in the golf training aid biz, Tour Striker Founder Martin Chuck and Driven Golf honcho David Woods, have really outdone themselves with the PlaneMate, which ingeniously and simply gives every golfer instant feedback on what a world-class golf swing feels like.

How? By assuring that the backswing goes up and back, not back and up, as in so many amateur moves; that the downswing relaxes and “flattens out” after transition, setting the golfer up for a repeatable, slightly in-to-out path through the ball; and that in the through-swing the hands keep moving around and up thanks to a proper pivot toward the target.

Ever the golf gadget tinkerer, Chuck — a PGA pro with three decades of teaching experience — based his initial design on a still-popular device called the Swing Jacket, but credits none other than a major champion named Darren Clarke for spurring him to take his prototype to the next level.

“Four years ago, I was using rubber tubing tied to a golf club to make students feel different things — resistor force or whatever — for a video I did for Revolution Golf,” Chuck told me recently. “I took the rubber tubing and tied it off on the center mass of the golf club, six to eight inches from the clubhead, and put the other end between my belt and pants. It gives enough resistance so you can feel it in your backswing — it keeps you from going across the line and forces you to lay it off a little, shows you how to rotate your right arm properly.

“Some people thought it was cool, some thought it was hokey. The Darren Clarke reached out, out of the blue. I had never met the man. Apparently he watches Revolution Golf videos, which shocked me. He instant messaged me through Twitter, said he saw the video. He said it was awesome — that he gets across the line, and it helped them. He’s a great guy, and we’ve been friends ever since.”

That’s when the Swing Jacket, and David Woods, came into play. Now the director of golf at Vintage Club in Palm Desert, he also saw Chuck’s video. “He said, ‘It’s cool — but in the through-swing, being connected to your belt doesn’t allow you to move around. What if we created a way for it to move around a bit?’

“I was in my office with all my prototypes that I mess with. I happened to look over at the Jim Hardy Swing Jacket, and oddly it had rails that hooked up to the arm sleeves. So I disassembled one of those rails, took it to a local shoemaker and had him put it on an old belt of mine, and figured out a way to rig up a keyring and start messing around with length and strength of tubing.

“I reached out to David, sent it to him and said, ‘Mess around with this and see what you think.’ His idea was the rail.”

So, how does it all work in the final product?

You just attach PlaneMate’s wide, adjustable, Velcro-equipped belt around the waist, attach the larger clip of one of three resistance bands to Woods’ slider mechanism (which allows the band to move from belt to about 45 degrees back), and attach the other end to a golf club — a wedge to start, then a mid-iron.

It’s an instant, unchanging connection from hands to club that might feel funny and restrictive at first, but once you check out Chuck and Woods’ excellent 7-Day Protocol Video Series, it all makes sense, and the magic starts happening via muscle memory. It’s all about maintain slight tension in the band throughout the swing, EXCEPT at that all-important transition from backswing to downswing.

All Chuck and Woods ask is that no one jumps ahead and takes the training step by careful step—first employing the shortest band for the wedge (Clarke even uses it for his driver, which has spurred a new, soon-to-come video), then moving to the longer band for longer clubs.

“The band work helps you get stretched out, gets the muscle aware to get the club up and behind you to create speed,” Chuck said. “You can resist what the PlaneMate is trying to do, or you can surrender to it. We call it ‘resist, resist, relax.’ It’s letting the hands be passive at that moment, let the club get behind you so your rotation inspires that inside-out motion, not physically trying to shove the club out to right field.”

Following the 7-day protocol, I tested PlaneMate over several days, and immediately found that it helped cure my pesky inside-jerk move at takeaway, even on the shortest pitches and chips. The feeling is, as Chuck said, strange at first, but by repeating each protocol motion a minimum of 30 times, the motion begins to take hold and golf balls take flight with much more impetus and authority — no breakdown of the arms or hands going back or at impact, to flipping ahead of the body in the through-swing. And more stability from address to follow-through.

Chuck explains the process in his semi-geeky way.

“Once you start to realize where the club goes, the body goes, ‘Oh, OK, if the club lays down shallow behind me in the downswing, my unwinding will be in an inclined circular relationship’ [with the club]. It can’t come over the top. You may miss left, because the club face is closed, but it’s not an over-the-top, a steep, stand-up/sit-in swing.

“Good players talk about ‘noodly’ arms, but it’s baloney. They’ve just become so proficient  that they can describe it that way. You look at Rory at set-up, and there’s some rippling in the arms. You look at good players at the top, and there’s nothing noodly about it. You need structure — it might feel mildly robotic at first.

“All we’re trying to do with the PlaneMate is put the correct structure in, let people train with it, so they can go from a highly conscious situation to an unconscious situation. You want to be able to look and fire, and have just one or two swing thoughts, not 50.

“It’s like playing a guitar or piano — you do the reps, and at some point the music just comes out of you, and you don’t know how. Or typing, or driving home. You don’t even know how you got there. Subconsciously, your brain knows what do to. Hopefully with this, in golf, you train yourself to be able to just wander off, talk to your buddies, but when you get over the golf ball, you kind of aim and fire and the results aren’t bad.”

That’s an understatement. The results are phenomenal. And game-changing.