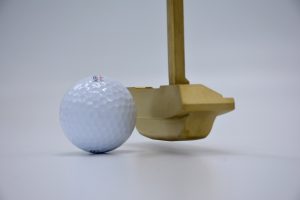 True story: The first time I visited the practice green with a finished prototype of the brand new Tour Roll putter, I buried three 15-footers in a row. Then I spent an hour rolling it over the medium-speed muni putting surface, getting used to his heavy solid brass head, the solid contact it afforded especially when I lightened my grip and let it release, the way it got the ball rolling “end over end” from the get-go ….

And THAT’s the key to the Tour Roll, the impetus behind its revolutionary design in a sector of golf equipment that really hasn’t changed in many decades. While designers and engineers have nibbled at the margins of putter science by moving weight, expanding the sweet spot, reducing twisting at impact and on and on — all in service of reducing friction and producing a cleaner strike — they’ve somehow avoided two big modern factors:  the speed of today’s greens and how the sole of the putter interacts with those greens.

That all changes with the Tour Roll, whose patent-pending “sole pillar” bisects the bottom of the club from end to end. A half-inch thick, three-quarters of an inch wide with its own three-inch-long sole, the pillar assures that the putter face actually strikes the ball at or slightly above the equator, thereby eliminating that initial backspin hop common to traditional putters no matter the materials used, the assembly method or the weight distribution. In concert with Tour Roll’s zero-loft face and slight offset, the pillar helps eliminate skidding and hopping on today’s lightning-fast surfaces. 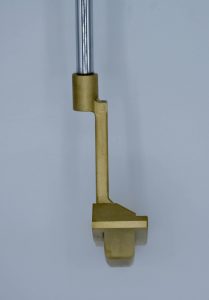 MADE FOR MODERN TURF

“For 50 years, every putter has been designed with slow greens still in mind,” said David Korn, a Grass Valley, California-based marketing and sales professional who helped design the Tour Roll along with engineers Gail Snyder and Steve Baures. “They were built to help the ball get rolling out of small depressions on soft, slow greens, and that’s why you saw players like Arnold Palmer put with that wristy, jabbing stroke. Nowadays, everybody wants their greens rolling at least 11 or 12 on the Stimpmeter, and the ball sits up on the turf. So you don’t need that little hop off the face, which often sends the ball off its intended line. The Tour Roll is the first putter to lift the center of the face up and in line with the equator of the ball. We want what we call ‘horizontal spin’ instead of backspin.”

That horizontal spin can’t be seen at impact in real time, but after months of testing with slow-motion cameras, Korn and PGA teacher Shawn Kelly of The Ridge Golf Club in Auburn, California — one of his chief consultants — witnessed the Tour Roll’s ability to get the ball rolling toward the target as if they’d got it going with the palm of their hand, like a basketball on a hard court. Then they worked with local machinists to come up with the final mold for the one-piece brass head which, from above at address, offers that familiar Anser-style shape. So you get a more traditional look in a simple but groundbreaking package. Literally.

After meeting me to show me the putter and lay out the science behind the Tour Roll in great detail and relate his clear passion for its development and potential in the crowded marketplace, Korn sent me some info on the philosophy behind it: 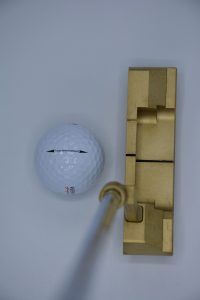 “With today’s shorter, smoother and faster greens it is not necessary to ‘launch’ the ball in the vertical direction in order to get up onto the surface of the grass and out of a depression.  Further, this vertical launch component can have negative effects. First, the energy to lift the ball in the air is not transferred to the horizontal path of the ball, so the putter does not work as efficiently as it could — you have to hit the ball harder to travel to the hole.  Second, and more notable, are the effects of the ball having to bounce and skid before beginning the proper rolling motion towards the hole. This bouncing and skidding is a direct obstruction to both the direction and distance intended by the golfer.  Inevitably, trying to factor in these variables and adjust for them causes many putts that miss the mark on both direction and distance.

“Two of the primary functions of the Tour Roll putter are to A) minimize the vertical launch of the ball — rolling it immediately off the face of the club and B) maximize the energy transfer from the putter stroke in the horizontal direction — towards the hole.   Again, the Tour Roll putter has been engineered to match the technology improvements of the greens. This directly translates to a more efficient putter stroke with a predictable roll and equally predictable direction.”

Those three 15-footers I sank when I first tried the Tour Roll — fitted with a SuperStroke Mid-Slim 20 grip and a standard 35-inch shaft — led to a full round with it on brand new, hard fescue greens at brand new Silvies Valley Ranch Links in eastern Oregon. Even with a couple instances of operator error when I gripped the putter too hard and lifted up the head, leading to a weird-feeling topped putt that came up well short, it performed beautifully in tough conditions. The greens were large and hard to read, but if I read the break even close to well, especially from longer distances, the Tour Roll would grip that line immediately and leave me in easy two-putt range.

The key is employing the lightest grip possible and letting the pillar do its thing, barely scraping the turf as the bottom of the face stayed that critical half-inch above it — right in line with the ball’s equator. It also worked from just off the green as long as the grass wasn’t too deep.

The main takeaway? Korn, Kelly and company are really onto something. They decided to look at putting in a different way. They devised a club that uses physics to full advantage by minimizing friction and promoting feel and trust. Which leads to confidence. Which means more buried eight-footers. Or perhaps three 15-footers in a row.