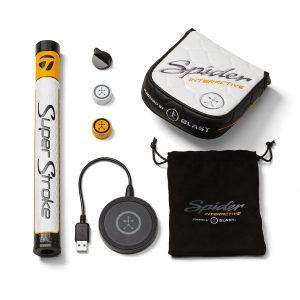 TaylorMade has announced the release of the new Spider Interactive Powered by Blast putter, engineered in collaboration with Blast Motion and SuperStroke Golf to advance how golfers of all skill levels capture, analyze and progress their game where strokes matter most — on the greens.

Spider Interactive automatically captures valuable stroke metrics in a seamless, non-intrusive design built into the top of the putter’s grip. TaylorMade has also co-developed a matching mobile app — available on March 1 for iOS and in Q2 2018 for Android users — which takes the user on a simple, intuitive journey to become a better putter. Spider Interactive measures key putting stroke metrics including timing (backstroke time, forward stroke time, tempo), impact stroke speed and face rotation. Users will be able to easily analyze details of their putting stroke and track progress over time with performance history and interactive graphs, along with tiered training modules and drills to help improve putting. The app will also feature video recording and playback capabilities so users can review and analyze their strokes. YouTube golf instructional personalities Me & My Golf will have tips and tutorial videos on the app for further developmental content.

The Spider Interactive Powered by Blast is available starting March 23, 2018