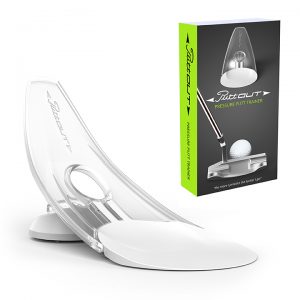 It’s just not possible to get too much putting practice. The world’s best sticks know it, single-digit handicappers know and higher handicappers should know more of it. That’s what makes PuttOUT, a new training aid from the U.K., so invaluable: It turns the repetitions necessary to dial in one’s aim and distance practice fun, easy and effective anywhere, including your living room carpet during that epic snow storm outside.

After spying PuttOUT at the 2017 PGA Merchandise Show, Golf Tips was intrigued and finally got its testing hands on one this fall, putting it through its paces (pardon the pun) indoors and out.

Shaped like a cross between an oversized shoehorn and a space-age ski jump, PuttOUT is designed to help build pressure putting skills and confidence, particularly from those crucial  par-saving distances of four to 10 feet. The device’s action zone is a soft plastic regulation-sized cup backed by a parabolic, harder plastic curve that gives immediate feedback on both distance and line; after rolling up that concave six-inch-or-so slope, bad putts are rejected back toward the golfer sideways, while on good ones return on the same line they arrived — assuming you’re practicing on a perfectly flat putting surface. There’s a great benefit in terms of gauging and grooving speed, too: each successful putt is returned the same distance it would have gone past the hole if it had missed — great feedback for getting the pace just right, with that 18-inch-or-less comebacker the desired result.

But the feature that really puts PuttOUT in the must-have column is its “micro target,” a small hole revealed when you pull down a rear panel. Knock the ball toward that hole with perfect speed and line and it will “stick” there as if  by magnetic magic. Then you’ve got a natural target to shoot at with a second ball, and a third.

Practice with PuttOUT turns semi-addicting in no time, and before you know it, muscle memory has kicked in, you’re not thinking about mechanics at all and everything slows down into that supreme relaxed state.

PuttOUT is ergonomically designed to fold and to fit into your golf bag easily, so you can take it with you once cabin fever sets in and you seek out warmer climes. But it’s a winner anywhere — break it out on a carpet at home or work or on a putting green, get a feel for what a smooth and accuract stroke feels like and start burying those knee-knockers.