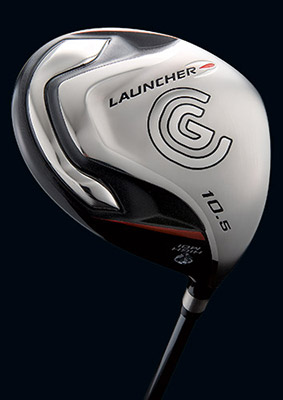 Now Playing: Cleveland Launcher
It’s back. It’s black. It’s bigger than ever. The new Cleveland Launcher ($299) has a face area that’s an amazing 21 percent bigger than the previous Launcher and Launcher Comp, meaning if you can’t hit it solid with this driver, you ought to try another sport. In addition, the Launcher has a razor-thin crown, which enabled designers to push the weight low and deep into the clubhead. Other features include a horseshoe design for enhanced perimeter weighting and a new Fujikura Fit-On FLIGHTSPEED shaft that has the highest balance point available. That translates into more clubhead speed and, you guessed it, more distance._Ê Visit www.golftipsmag.com/ezlinks.

PING Perfection
The new iWi series ($190-$220), from PING features six models, all of which come standard with a two-piece face insert and two, 12-gram steel sole weights in the toe and heel of the putter that can be swapped out for a custom feel (optional weight kit sold separately for $70). Visit www.golftipsmag.com/ezlinks.

Adidas goes 360, Again
When Adidas Golf first introduced the original Tour360, some players thought it looked a bit odd. But after wearing it, and the Tour360 II, most became believers. The new Tour360 3.0_Ê ($180) takes the unique design to the next level with 360WRAP and Heel Cup Technology. Available in three color combinations._Ê Visit www.golftipsmag.com/ezlinks.

After Burner
If you’ve got a double-digit handicap,TaylorMade has a set of irons for you. Its new, highly forgiving Burner Plus ($599-$899) lineup features a high MOI, which makes them extremely easy to hit. Designed with a thin clubface, the club has the weight moved deep and back to increase the CG. Plus an increased degree of offset makes the Burner Plus irons easy to square up at contact. Comes in a standard set and a combo that includes two Rescue clubs to replace those hard-to-hit 3- and 4-irons. For more info, visit golftipsmag.com/ezlinks.

Bag Boyz
“It doesn’t matter if you win or lose, it’s how you look.” That’s what a golf coach once said to a GT editor. Of course, he was kidding, but there was some truth to what he said. After all, half the fun of golf is to acquire gadgets and high-tech accessories. Bags are no exception. In the past few years, they’ve gotten progressively sleeker. Consider these four offerings._Ê_Ê

Adidas Ascend
When Nike entered the golf market, many people didn’t think it would be successful. They were wrong. Now Adidas has decided to grow its on-course presence, too. The new Ascend golf bag boasts five full-sized pockets, a six-way air-mesh top and integrated kickstand. $99

TaylorMade Monza Stand
Disco is not dead. TM’s new Monza stand bag shimmers in its satin polyester finish, but its grooviness doesn’t stop there. Look for a velour-lined valuables pocket and insulated water-bottle pocket. Features six pockets and weighs 6.2 pounds, a lot less than a disco ball. Available in single or double strap. $169

Nike Xtreme Sport
This “xtremely” lightweight offering from Nike tips the scales at a mere five pounds. But its featherweight body is just one part of the Xtreme’s appeal. What else? Try its six color combos, six pockets and the eight-way divider. Not impressed? It also has a valuables pocket and water-bottle slot. Sweet. $99

Best Of Both Worlds
If you want a soft-core ball and mega distance but also want a Tour-caliber, multilayer cover design, it’s here. The new Bridgestone B330-RX ($45) makes it easier for golfers with average swing speeds to tap in to Tour-like responsiveness around the greens. In addition to the new and impressive B330-RX, Bridgestone is unveiling new iterations of the popular B330 and B330-S—this time with 4-layer technology. For the scoop, visit www.golftipsmag.com/ezlinks.

High Octane For Your Driver
If you’re looking to soup-up the performance of your driver, it’s time to give serious thought to a shaft upgrade. One new option, Aldila’s VooDoo features S-Core technology that stabilizes the shaft with an innovative internal rib design. Another high-quality option is the AURA from Graphite Design. Available in Red, Gold, Blue and Green models, there’s an Aura for just about every swing speed and ballflight. To learn more, visit www.golftipsmag.com/ezlinks.

Ball Control
Golf balls used to have numbers stamped on them (80, 90 and 100) to identify their relative firmness. Those numbers are gone now. So how do you know what compression your golf balls are? With the Hexcaliber compression gauge ($235-$275). Just place a ball in the device and pull the lever, and a precision compression reading is immediately displayed. Visit www.golftipsmag.com/ezlinks.

Cobra’s New Poison
Cobra drivers always have appealed to long hitters, and the new L5V ($399) is no exception. Designed with what the company says is the largest clubface in golf, the L5V is built with a carbon composite crown and sole inserts for a high-launch, low-spin ballflight that maximizes distance. Visit golftipsmag.com/ezlinks.

Dual Powered
Designed to simultaneously loosen and train muscles, the cleverly designed Power-Blade ($55) incorporates resistance and weight training into one device. Just apply it to any club (even a putter), and, in just a few swings, the weighted feel and wind resistance generated by its three blades help golfers train and develop better muscle memory and strength. Plus its weight doesn’t compromise your shaft, since it’s distributed evenly across for greater support. So you don’t have to worry about it bending or breaking the shaft as you do with weighted donuts that fit around the clubhead. For more info, visit golftipsmag.com/ezlinks.

Golf_Ê Vitality
Amino Vital has entered the golf market with a number of products designed to enhance stamina, strength and mental concentration during a round of golf or a gym session. Zach Johnson used it en route to winning a green jacket, and another 150 PGA Tour players use a variety of their products, as well (don’t be concerned, all supplements are steroid-free.) For more information, visit www.golftipsmag.com/ezlinks.

Titleist Goes Deep
Players looking for a new big stick would do well to check out the new 909 D2 ($399) from Titleist. With a modern, pear-shaped profile, CNC-milled face insert, SureFit swingweight screw and a tuned-sole design, the 909 D2 is one of the most advanced drivers the company has ever brought to market. Visit www.golftipsmag.com/ezlinks.
_Ê