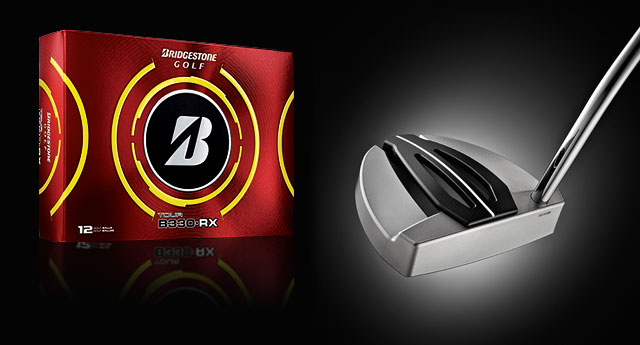 Bridgestone has four new balls in their B330 ($45/dozen) lineup. Each features Dual Dimple technology (a dimple within a dimple), which offers superior aerodynamics and enhanced performance in the wind. How do you know which ball is right for you? The first step is to know how fast you swing. Over 105 mph? Then you’ll want the B330 or B330-S. Less than 105? Either the B330-RXS or B330-RX is your model. From there, narrow your search to spin and launch characteristics. bridgestonegolf.com

TITLEIST
_È_Titleist‘s two new ball offerings for 2012 are the DT SoLo ($20/dozen) and Velocity ($27/dozen). What’s the diff? If you like a soft-compression ball that yields long shots with both your woods and irons, then pick up the SoLo. The Velocity features a nonurethane cover, so look for a firmer feel and a fast core from Titleist’s LSX core technology. The SoLo comes in an optic yellow version, and the Velocity features high numbers in orange. titleist.com

SRIXON
_È_Boasting a soft urethane cover, the three-piece Srixon Z-Star SL ($45) features added spin control without sacrificing distance. Also it pierces through the wind, thanks to its aerodynamic, 324-dimple design. Comes in both white and Tour yellow versions. Look for a Z-Star XV version, too. srixon.com

INNOVEX GOLF
The E-Motion Tour ($20) from Innovex Golf is one of the game’s only three-piece surlyn golf balls. Designed with a Progressive Motion Dual Core to fly farther, spin faster and feel softer while still offering tremendous durability, it also features a proprietary Aeroblend Cover and parallel dimple dividers that smooth airflow for increased flight distance and stability. innovexgolf.com

TAYLORMADE
_È_With 28% lower core compression, the new five-piece, urethane-covered Taylor-Made Penta TP5 ($46) produces lower driver spin, longer shots and a softer feel on pitch shots. Developed for Tour pros, the TP5 can be played by golfers of all abilities, but better players will notice the difference between the ball’s five layers. taylormadegolf.com

PING
Used by Hunter Mahan en route to making 35 birdies and capturing the WGC Match Play Championship in late February, the PING Nome ($270-$320) boasts an aluminum frame and a tungsten weighted sole, which helps raise the MOI for steadier strikes. What we like the most are the three shaft bend options that fit your stroke, no matter how you swing it. Weights range from 355 grams to 405 grams. Comes in six models, including three belly lengths. ping.com

RULE GOLF
Have trouble exhuming dirt and mud from your grooves? Worry no more. RuleFourteen’s Invisibrush Golf Towel ($25-$30) is a two-in-one towel constructed to dig dirt out of the most stubborn clubfaces. While its front is a microfiber towel, its underside features a coarse scrubber. And you thought the only hybrids you used on the course were clubs. rulegolf.com

CALLAWAY
Designed by master wedgemaker Roger Cleveland, Callaway‘s new Forged wedges ($120) lend all the shotmaking playability one could ask for. The C-Grind sole reduces surface contact near the sole, making it a cinch to hit open-faced shots. Comes in six lofts from 52_¡ to 64_¡ in a Copper or Dark Chrome finish with TT Dynamic Gold shafts. It has 21 tightly spaced grooves, too. Love that copper! callawaygolf.com

BAG BOY
Bag Boy introduces the TriSwivel ($270), the only push cart with a front wheel that swivels 360 degrees. Constructed of a lightweight, weather-resistant aluminum frame, the TriSwivel features a handle-mounted parking brake, scorecard holder and umbrella holder. Folds down to 22x14x18 inches. Four colors available. When walking on hills or long distances, the wheel can be locked into place. bagboy.com

SUN MOUNTAIN
After suffering a PR nightmare at the 2010 Ryder Cup, Sun Mountain bounced back admirably last year with new rain gear for The President’s Cup. 2012 sees the introduction of their Torrent ($119-$164) collection, which offers guaranteed waterproof protection and a four-way stretch fabric that permits a free-flowing golf swing. Also available in a lighter-weight version. Comes in full-zip jacket and pants for men and women. LT version comes in three men’s styles. sunmountain.com

SUN MOUNTAIN
After wowing Golf Channel judges on their reality show Fore Inventors Only, the ClubGlider is back with a new version called the Journey ($199-$299). The smaller, lighter version features a more tapered design and was constructed from 1200 denier fabric, making it lighter than the two other ClubGlider versions. sunmountain.com

ADIDAS
The new lightweight Raylor ($99-$149) sunglasses from Adidas feature a lens shape that’s optimized for golf with wraparound protection that fits easily with caps and visors. Comes in six colors and two different sizes and a double-snap nose pad for the perfect fit. adidas.com

TIFOSI
Two new lightweight models have debuted from Tifosi. Called SEEK and SEEK FC ($50-$90), they both have an adjustable hydraulic rubber temple and nose pad for a custom fit. Both fit small to medium-sized faces and are molded from a flexible material called Grilamid TR-90. Comes in many color schemes. Available with GT lens, which is made specifically for our sport. tifosioptics.com

KAENON
The slick, light and unisex Jetty ($214-$224) shades from Kaenon feature tall temples and a rectangular shape. When we slipped these frames on, they blocked out mucho light and were easy on our eyes in the SoCal sun. We’ll chalk that up to the SR-91 polarized lenses, which have the optical clarity of glass, but the light weight and durability of a polycarbonate. As seen on Pat Perez and Sophie Gustafson. Told you they were unisexy. kaenon.com

ADIDAS
Originally introduced in 1950, the Samba ($100) became a global sensation, worn by soccer players and slackers alike. Now Adidas has introduced a spiked version for golf. We tried them back in December, and based on the number of people who came up to us asking, "Where did you get those shoes?" these could be a real hit. Look for a limited-edition line inspired by this year’s four majors, too. adidasgolf.com

PUMA
Yet another throwback-shoe offering for 2012 is the Puma Roma ($100). Features a leather upper and a cushioned midsole for arch support and comfort. The rubber outsole reminds us of our school days–let’s hope we play as well in these as we used to. Comes in four styles. shop.puma.com

SWIFTWICK
Cool, thin, breathable and comfortable. Oh, and stylish. Swiftwick socks ($10-$13) have made a splash on the PGA Tour and should be making their way onto your feet, as well. They come in short and long lengths and many different styles. You might never go back to another sock once you put these comfy feet huggers on. swiftwick.com