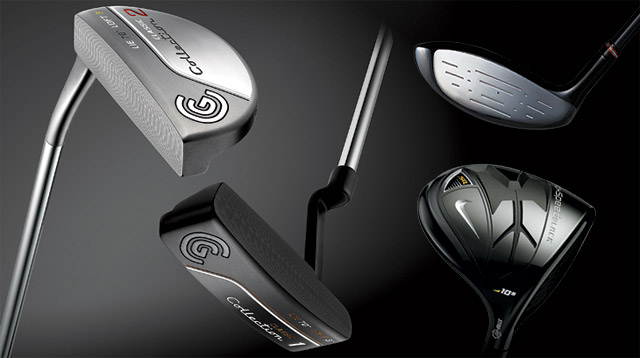 NOW PLAYING CLEVELAND
With 16 models to choose from, Cleveland‘s new Classic Collection ($79) offers something for everyone. All models are made from 17-4 stainless steel and come in three different finishes: black platinum, platinum and BRZ (bronze). What really intrigued us, however, were how well made and gimmick-less they were. There’s nothing spaceship-like about them, just good solid craftsmanship. Come in three lengths (33", 34", 35") and with CNC-milled clubfaces. clevelandgolf.com

STX
The 2011 Sync Series Collection from STX improves on the company’s popular Sync models. Featuring new alignment aids, the 355-gram SS1 ($109), as it’s now called, is a center-shafted, “bullet back” design that places optimal weight directly behind the sweet spot. As with all STX putters, the SS1 has a F.E.E.L. (Friction Enhancing Elastomer Layer) face insert for a supersoft feel. We’re jazzed to test this out at the 2011 PGA Merchandise Show as we were big fans of the original Sync. stxgolf.com

RIFE
Rife‘s new Montserrat putter ($149) features a slant-back design that’s reminiscent of 1960s’ blade putters. However, what we really like is that this modern version looks sleeker and rolls smoother than many “throwbacks.” Of course, it features Rife’s trademark vertical-alignment notch and patented RollGroove face technology. If you’ve never rolled a Rife, you’ll notice how soft and smooth the ball comes off the face. As are all Rife putters, the Monserrat is 100% milled and made of mild 304 stainless steel. Available in three lengths: 33", 34", 35"; weighs 345 grams. rifeputters.com

PING
The handsome, dark finish on PING‘s new Scottsdale putter line ($140-$180) stands in contrast to its white and maroon alignment aids, making at least the mallets that much easier to address (the blades don’t have the maroon coloring). With 14 models to choose from, including the new Wolverine model, there’s something for everyone and every taste: conventional length, midlength and long, Anser2, B60 and Craz-E Too. While we loved their soft feel and numerous model options, what stuck out the most was the finish. It just looks classy, even on the “futuristic” models. ping.com

PIRETTI
Made from either 303 stainless or 11L17 carbon steel, Piretti Golf‘s five new handsome putters ($265 ) feature Optimal Roll Control (O.R.C.) for feel and control. When we test-drove them, we liked how well-balanced they felt, as if they could swing themselves without much effort on our part. Their precise milled face with a single-pass deep pattern provides consistent performance at impact, but you’ll notice a bit harder feel at impact than putters with inserts. Still it was hard to complain, given how well they performed. All putters have a PVD (Physical Vapor Deposition) finish (either Midnight Black or Satin Stainless) that produce a durable, nonglare finish. pirettigolf.com

NIKE SQ MACHSPEED
Nike’s second-generation SQ MACHSPEED ($300) comes in two clubhead shapes (square and round). How does it differ from last year’s model? Well, for one thing, it’s got a cool black finish; the other is that it’s lighter. (The clubhead is the same weight; the shaft and grip are lighter.) Perfect for golfers who like to tweak their setup because both models feature STR8-FIT adjustable-face-angle technology. Look for a larger clubhead in the square model (in breadth and face area), which increases the MOI and ball speed across more of the face. nikegolf.com

FOURTEEN GOLF ST-110 DRIVER
The traditional-looking, but modernly engineered four-piece, premium, ST-110 Driver ($699) from Fourteen Golf features an aerodynamic crown that combines two different types of Titanium: 15-3-3 that’s used close to the clubface and KS-100 near the rear. Engineers combined those superlight materials to lower the CG toward the sole and provide a higher launch angle and, hence, yield longer drives. A great stick, but are you willing to drop $700 for it? Test it and see. fourteengolf.com

GOLF PRIDE V-RAD RIVALRY
With so many new putter grip designs flooding the market, how do you know which one is right for you? Consider size, shape, design and materials. Golf Pride answered them all in their V-RAD Rivalry putter grip ($10), which is just the thing you’ll want if you’re feeling patriotic on the links. We dug its light (though not superlight) semi-pistol shape, too. In particular, we don’t like grips that are distracting when we putt, and the V-RAD offered the perfect blend of tackiness and texture without calling too much attention to itself”other than its cool looks. golfpride.com

LAMKIN E.B.L
Lamkin‘s four new E.B.L. putter grips ($6.99-$10.99) were named after the company’s founder, Elver B. Lamkin, and made with the company’s 3GEN synthetic rubber compound, a soft and tacky material that’s easy to grip. We tested all four new models and can say that it all comes down to which shape, size and texture you like to feel in your grip. We really dug the ones with surface pattern (E.B.L. Pistol, E.B.L. Paddle and E.B.L. Midsize Paddle). If you like a smoother feel, go with the tacky, but texture-less E.B.L. Smooth Pistol. lamkingrips.com

WINN GRIPS
Winn Grips introduces two new grips that will help you play better golf and contribute to two worthy causes. The 5LF-Hero ($8.49) features WinnLite grip technology, which not only makes your club lighter but makes it easier to swing faster, too. The M8WS-BPK ($6.99) is a soft, tacky and comfortable Excel material, which comes in a Medalist pistol size. What we liked the most, however, was that proceeds from the sales of both go to worthy causes: the Troops First Foundation and Breast Cancer research. All in all, it’s a win-win for Winn. winngrips.com

NIPPON N.S. PRO MODUS3 TOUR 120
Swing like a Tour pro? (Or at least close to one?) Then you’ll benefit from Nippon‘s new N.S. Pro Modus3 Tour 120 ($35/club) steel irons shafts. The Japanese company wisely spent lots of time talking with PGA Tour pros to develop these players’ shafts. They produce a desired trajectory, accurate distances and tight dispersion that low-handicappers crave. The shaft weights range from 114 to 126 grams and come in S, X and Tour X flexes. It’s good to see one of the best shaft companies designing a line specifically for better players. nipponshaft.com.

ROYAL COLLECTON USA
It’s been a long and winding road for Sonartec clubs in the U.S. Now known as Royal Collection USA, the company will release fairway woods, hybrids and irons back to the North American market in the first quarter of 2011. We were big fans of Sonartec, so this is exciting news. Consider that the company is one of the most popular in Japan and has never paid any pros to play its clubs. Designed for better players, the new clubs promise to generate low spin and are built for optimal control. royalcollectionusa.com

MARUMAN SHUTTLE I4000X
The solid-looking and premium Shuttle i4000x ($229) from Maruman comes in six models with lofts that range from 15_¡ to 30_¡. The maraging 200 clubface helps to create a solid club that absorbs impact shock. Although not a household name yet in the U.S., the Japanese company has been slowly making headway, proving that you don’t need to be a “big boy” to turn heads. maruman.co.jp/english

IT’S JUST GOLF
At 22, Stephen Fangio lost his left leg in a motorcycle accident. A prosthetic was out of the question, because it was amputated at the hip. But he didn’t let it stop him. In 1997, he competed in numerous PGA Tour and Nationwide Tour qualifying tournaments. Now the 52-year-old instructor, motivational speaker and aspiring Champions Tour player, is passing along his knowledge in his golf-instruction video series titled It’s Just Golf with Stephen Fangio ($19.95). The first offering focuses on relaxation, foundation, grip and the proper mind-set to swing the club. fangiogolf.com

SMART GLOVE
Smart Glove($34) by Sklz helps place the golf club in the proper position on the golfer’s lead arm and keeps that arm’s wrist firm so you don’t break down and “scoop” the ball. Plus you can remove its stability bar in the back and use it as a legal glove. We love good training aids, and this one addresses a couple major flaws that golfers suffer from. Try it if you have trouble with any of the above. sklz.com

CALLAWAY HX DIABLO
Callaway‘s new two-piece HX Diablo golf balls ($20-$26/dozen) also come in a three-piece Tour version. What’s the diff? Well, when we tested them, it came down to a difference between distance and feel. We got a few more yards with the Diablo version, and a little more feel from the Diablo Tour. (Although, to be honest, the HX was pretty darn soft for a two-piece.) callawaygolf.com

POLARA GOLF BALL
Can’t hit the golf ball straight? Always holding up play by looking for your ball in the woods? Consider the Polara Golf Ball ($28-$35/dozen). Originally introduced in 1977, these nonconforming balls are back on the market and feature a special dimple pattern that produces preferred spin, like a gyroscope. Simply point the arrow down the fairway when you tee off, and Polara claims it’ll eliminate your hook and slice by up to 75%! Comes in a two-piece and three-piece model. If it speeds up play, why not? polaragolf.com

TOP FLITE
Repackaged, rebuilt, reset. Top-Flite‘s newest offerings, the D2 ($16/15 balls) and Gamer V2 ($20/dozen) promise big distance and better feel than what people used to call Rock-Flites. The two-piece D2 comes in four models, but we tested the Feel. While they won’t make their way into a Tour player’s bag, they did feel softer than we expected, and at $16/15 balls, it’s hard–no, it’s impossible–to beat the price. The three-piece Gamer V2 still feels pretty firm, but flew a mile. Maybe that’s because it (and the D2) feature Dimple in Dimple aerodynamics, a patented cover design that reduces drag. topflite.com

GROOVE RT
Tired of inconsistent tee heights at the driving range? Frustrated that rubber tees are too short, too tall or broken? The Groove RT ($6.99) adjustable-range tees screw up or down so you can tee the ball exactly the height you want. Hit off thick mats or use an oversized driver? Use the oversized model. Hit off thin mats or want to tee up some 3-woods? Try the regular size. Great idea! Why hasn’t anybody else ever thought of this? precisiontees.com

In our 2011 Golf Power Annual, we wrote that, “Over the years, the only change to grips is in their materials, from leather to rubber.” That’s not true. Winn Grips constructs their grips from polymer. Golf Tips regrets the error.